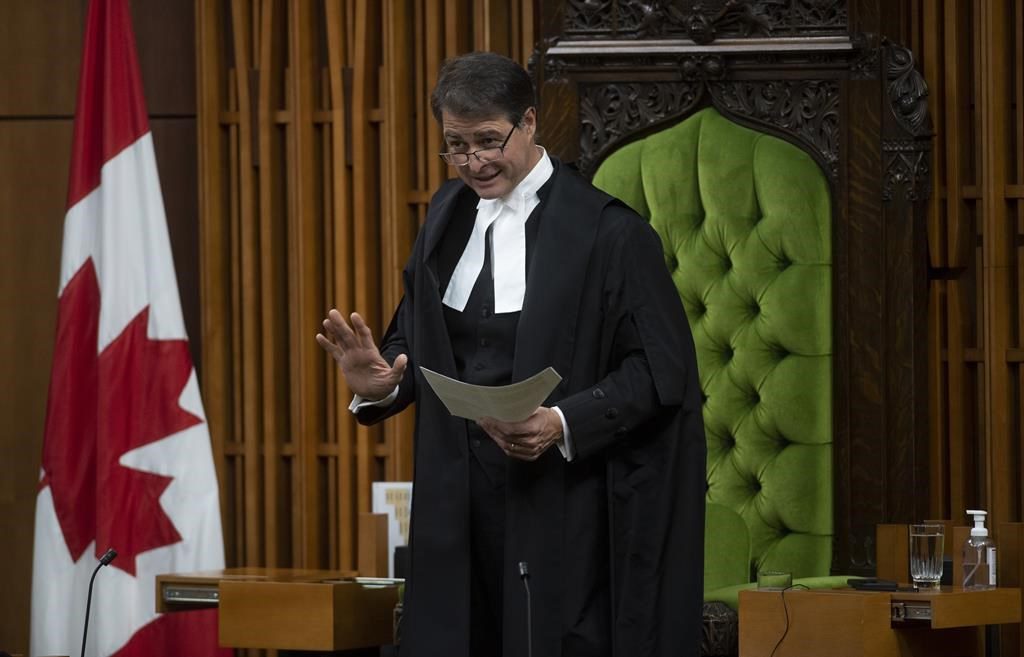 OTTAWA â€” Taking a screenshot of a naked Liberal MP during virtual parliamentary proceedings was an affront to the authority and dignity of the House of Commons, Speaker Anthony Rota ruled Monday.

Rota sternly reminded MPs that it is “strictly forbidden” to take a photograph of Common proceedings, whether in-person or virtual and regardless of whether the proceedings are beamed to the public.

With that, the Speaker said he considers the procedural aspect of the incident to be “closed.”

But Liberals are not letting the matter drop. They are taking it to the all-party board of internal economy, the governing body of the Commons. If the board does not agree to impose sanctions on the Bloc QuÃ©bÃ©cois MP who has admitted taking the photo, the Liberals are threatening to take it to the police.

Rota was responding to an incident on April 14 when Liberal MP William Amos inadvertently appeared naked on an internal parliamentary feed of that day’s question period. His image was not seen on the public feed.

Amos has said he was changing his clothes after a jog and did not realize that his laptop camera was turned on.

Bloc QuÃ©bÃ©cois MP Sebastien Lemire last week apologized for taking the screenshot of Amos. He said he had no idea how the photo quickly made its way to the media and ended up circulating online around the globe.

“All members of this House should be able to rely on their colleagues and staff to respect each other in conducting themselves in the chamber, whether in person or virtually,” Rota said Monday, calling the dissemination of the Amos photo “deplorable.”

“It is in everyone’s interest that this practice continues to be observed rigorously. As such, the events of that day is a clear breach of our rules and, more importantly, an affront to the authority and dignity of the House and its members.”

Rota added that respecting the rule against photographs “has never been more crucial” than during the COVID-19 pandemic, when most MPs are participating in Commons proceedings virtually from their homes or offices and at a time when technology makes it easy to widely disseminate photos.

“I am therefore counting on everyone’s collaboration to respect the rules in this new operating environment. As far as the House is concerned and the procedural aspect of the issue, I consider the matter closed,” he said.

Amos, who is the parliamentary secretary to Industry Minister FranÃ§ois-Philippe Champagne, did not immediately respond to a request for comment on Rota’s ruling.

But Liberal whip Mark Holland said Rota went as far as he could on the matter, having no authority to impose sanctions.

Holland said the matter of sanctions will be raised at the next meeting of the board of internal economy, at which he hopes Lemire will explain with whom he shared the screenshot of Amos.

“If he made the choice to share this with somebody that he thought was confidential and didn’t think it was going to go anywhere, that’s serious. But it’s much more serious if he was being irresponsible with this image and sending it all over the place,” Holland said in an interview.

The board operates on the basis of unanimity and if there is no unanimous decision to sanction Lemire and anyone else involved, Holland said the Liberals will “have to look at other actions.”

“Frankly, I really feel when you look at other instances that have been in the public domain of people sharing naked photographs of people, there’s a criminal component here,” he said.

“I would have preferred to deal with it in the House, but if the House is refusing to take its responsibility to govern itself, then we’re going to have to escalate that further. It’s not acceptable for us that this just kind of gets shrugged at and walked away from.”

For his part, Amos said in an interview Monday that he’s focused “at this particular juncture” on getting the facts: with whom did Lemire share the photo and who leaked it to the media and why?

“Accountability will flow from facts,” he said, adding that he’s not thinking about sanctions or other measures at this point.

Amos said he’s counting on all parties to agree to pursue those facts. He said he’s heard from members of every party expressing “their dismay and appreciation of the fact that no member of Parliament, no human, no family should have been subjected to this.”

Amos said it’s not in his personal interest to keep the incident in the news but it is in the public interest to find out who is responsible and ensure such a thing never happens again.

“Let’s be clear, this is going to be around me for decades. How can I hide from it? I can’t. I’m naked on display for the whole world to know.”

Holland said the purpose of taking and sharing the screenshot was to “laugh at and humiliate” Amos. He said he’s heard other MPs talking about Amos’s physique and questioned whether they’d do the same had the photo been of a female MP.

Holland said he’s also heard from other MPs worried that someone will take and distribute embarrassing photos of them if, for instance, they fall asleep in the lobby outside the Commons after a red-eye flight to Ottawa.

He noted that MPs talk a lot about ensuring safe workplaces across the country where “this kind of toxic behaviour is not permitted.”

“And then we’re having it unfold under our own nose and just saying, what, that it’s OK, tsk, tsk, don’t do that again? â€¦ It opens up a whole other line (of partisanship) that I think we’ve got to say, ‘Enough.'”