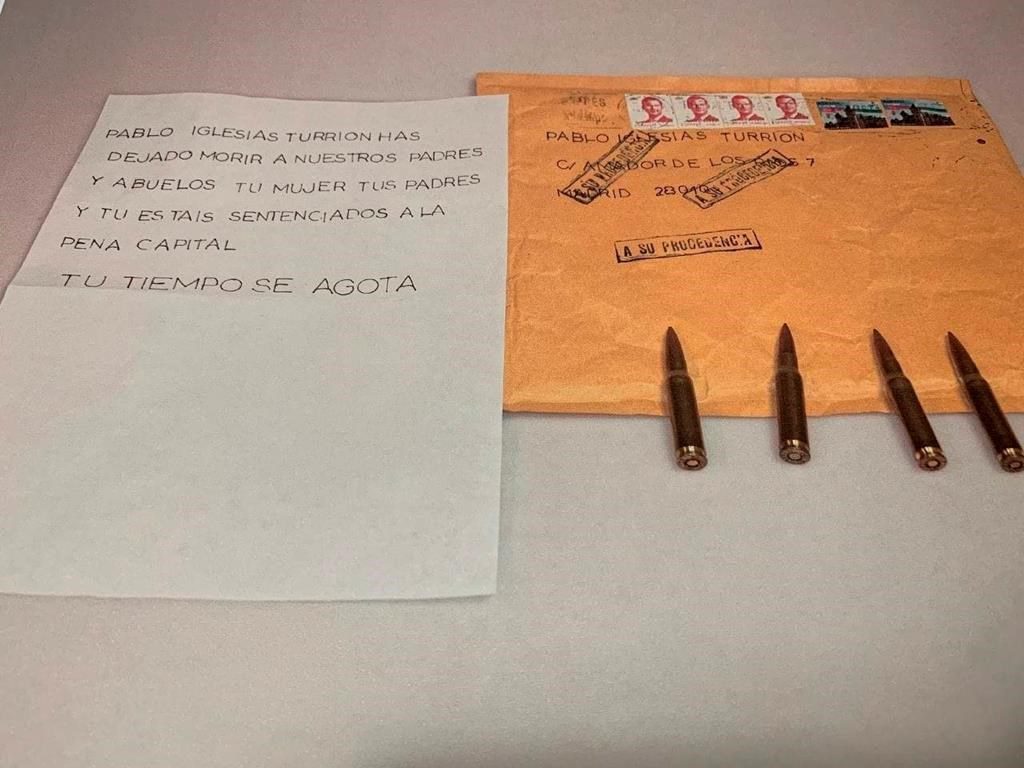 MADRID â€” Most political parties in Spain put aside their differences Friday to condemn a series of death threats mailed to the country’s interior minister, the director of the Civil Guard police force and the leader of a far-left political party.

But the issue provoked a bitter confrontation between United We Can leader Pablo Iglesias, the recipient of one of the letters, and the far-right candidate in an upcoming regional election in Madrid, who cast doubts on the threats.

Vox Party Madrid leader RocÃ­o Monasterio said she was against "all kinds of violence," but refused during a radio debate with to back away from earlier remarks that she didn’t believe her opponent’s account.

As a result, Iglesias and two other left-wing candidates refused to continue speaking with the far-right politician, and the debate ended abruptly.

The threats were delivered in envelopes filled with bullets and accompanied by anonymous letters either demanding the three officials step down from their positions or plainly menacing the recipients and their relatives.

Iglesias, who recently stepped down as one of Spain’s four deputy prime ministers to run in the May 4 Madrid election, posted a photo on Twitter showing the four bullets he said arrived inside the envelope and the letter addressed to him at the Interior Ministry’s headquarters in Madrid.

"You have let die our parents and grandparents," the letter posted by Iglesias read, adding: "Your wife, your parents and you are sentenced to capital punishment. Your time is running out."

"You have 10 days to step down. The time to laugh at us has ended. National Police. Civil Guard,” read the letter addressed to Grande-Marlaska, according to the private news agency Europa Press. The interior minister oversees both police bodies.

The Vox Party’s Monasterio had said she didn’t believe the Spanish government or Iglesias were telling the truth about the threatening letters.

"They have tricked us since the beginning of the pandemic," she said during an interview.

Later in the day, when Monasterio refused to back away from her remarks during the debate hosted by Cadena SER radio, Iglesias said he refused to whitewash the far-right’s hate speech. He left the event and two other left-wing candidates followed, leading the radio show’s host to close the debate.

The Madrid region’s conservative incumbent president, Isabel DÃ­az Ayuso, is set to win next week’s election, according to the latest polls. But her ability to form a government is likely to hinge on opening the door to Spain’s first regional coalition government with the far-right.