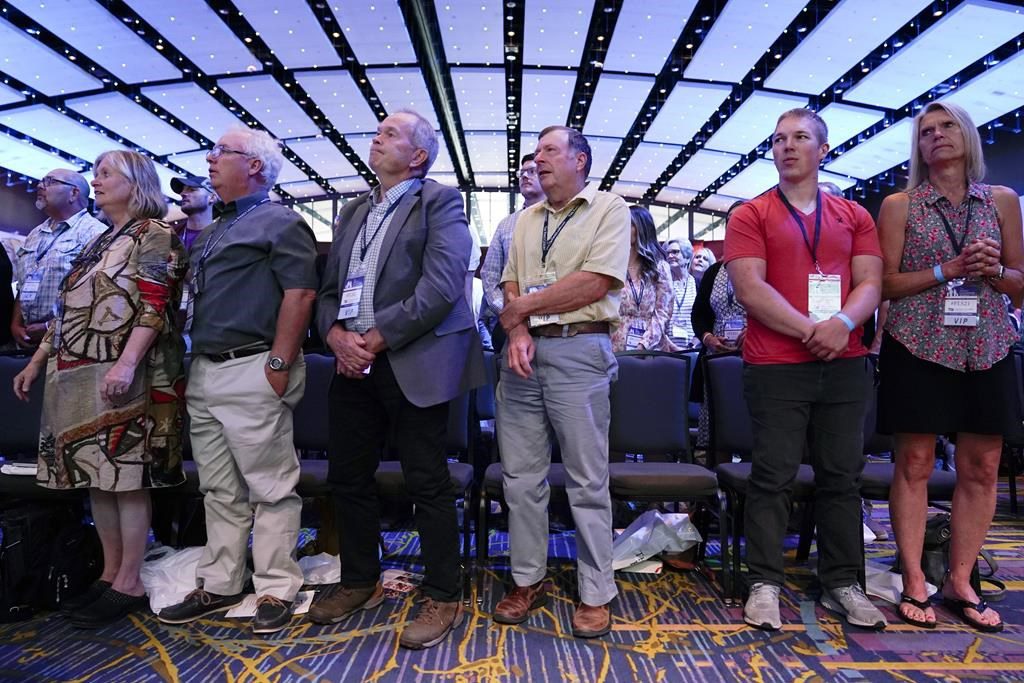 SIOUX FALLS, S.D. (AP) — South Dakota Gov. Kristi Noem says she has no plans to ratchet up her messaging to urge people to get a COVID-19 vaccine, even as Republican leaders across the country try to persuade vaccine skeptics to roll up their sleeves and take the shots in response to a new, more contagious variant that has sent caseloads soaring in some parts of the country.

The Republican governor told The Associated Press this week she believes her messaging has reached “a saturation level where people start to tune you out.

South Dakota’s Department of Health is trying a targeted approach to reach groups where vaccine uptake has been low. But it has been months since the governor used her position to encourage the vaccine, even with infections rising again in the state after a steep decline in the spring and early summer.

Noem’s rise as a potential contender for the 2024 GOP presidential ticket has been mostly fueled by her hands-off approach to the pandemic — a distinction that may complicate her messaging to a Republican base that has rejected the vaccine in large numbers.

Other party leaders and conservative cable news personalities, facing a fresh wave of infections spurred by the delta virus variant, have sounded the alarm in recent weeks and tried to convince people to get the shot. Republican governors such as Arkansas’ Asa Hutchinson, who recently took over as chairman of the National Governors Association, have called combating vaccine resistance a priority and used their positions to advocate for the shot.

Noem initially championed the arrival of the vaccine, putting out a video message in March to say she was “trusting people to do the right thing” in getting the shot and posting a social media photo of her rolling up a sleeve for it. She also touted how South Dakota initially had one of the country’s highest rates of vaccinations. But the state’s vaccination rate has since tumbled into the bottom half of states, with under half of the total population fully vaccinated against COVID-19. Meanwhile, virus cases in the state have more than doubled in the last two weeks, though the rate remained lower than at any other point besides the early days of the pandemic.

The governor acknowledged the delta variant poses a new risk.

“We might need to really step up our communication so that people understand how the variant is different,” she said. “You might see more communication from us if we start seeing cases dramatically increase.”

Public health officials believe the variant is at least twice as contagious as the original version, but the shots appear to offer robust protection against serious illness for most people. Nearly all COVID-19 deaths in the U.S. are now people who haven’t been vaccinated. Nonetheless, just 57.1% of Americans have received at least one vaccine dose, according to the Centers for Disease Control and Prevention.

Noem has held out against ordering people to wear masks, even as the state last year saw one of the worst virus surges in the country, and has raised doubts about the effectiveness of their widespread use in public. When the CDC this week offered new guidance for vaccinated people to return to wearing masks indoors in areas with high infection rates, she responded with a mocking Twitter meme.

She argued that governors who issued orders aimed at curbing infections were overstepping the bounds of their office.

“Any other governor that took a stronger mitigation measure, they broke their oath to the Constitution,” she said. “Every governor that closed a business could be sued for the taking of that business.”

Her approach has drawn widespread attention, as well as criticism. In a wide-ranging interview with the AP as she returned from a visit to the U.S. border with Mexico, Noem discussed how she has not shied away from controversy during her first term in office, and at times sees the backlash as an advantage.

Before the pandemic, Noem was perhaps best known for being nationally lampooned for an anti-drug campaign that used the tagline, “Meth. We’re On It.” She said she has no regrets about approving the ads, especially after seeing South Dakota become one of just two states that saw drug-related overdoses decline in 2020.

However, she did acknowledge the political risk that comes with another unpopular stance she has taken: opposition to recreational marijuana. South Dakota voters approved legalizing it last year, but Noem launched a lawsuit challenging the measure on constitutional grounds. A circuit court struck down the law, though an appeal is pending before the state Supreme Court.

“I don’t feel like I should have changed my position, but I could have communicated it better,” Noem said. “I think public opinion polls would say, just let it go. But 10 years from now, there’s going to be real consequences, real costs to families, real costs to the government.”

In a state dominated by Republicans, it’s not clear if Democrats have much chance to unseat Noem in next year’s midterm election. Noem has burnished her conservative track record and described seeing the state as a “pilot project” for conservative policies.

“It’s a different way of approaching the same problems every state has, except doing it from a conservative, smaller government mindset,” she said.

However, so far, many of her stump speeches have occurred at conservative gatherings and fundraisers outside the state rather than in South Dakota, fueling criticism she is more focused on a 2024 White House bid than on being governor. Sh also has hammered hard on national issues sure to rile the GOP’s base.

But Noem denies she is angling for anything beyond being South Dakota’s governor, saying, “Anybody who wants to run for president should never be president.”