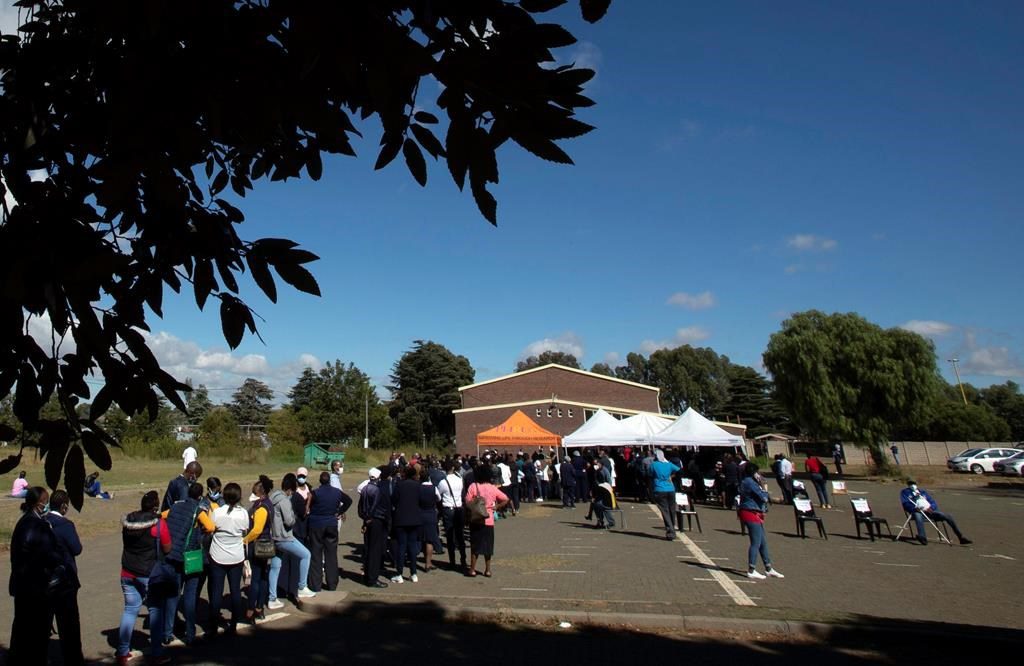 JOHANNESBURG â€” South Africa’s decision to suspend the use of the Johnson & Johnson vaccine due to preliminary reports of rare blood clots has left the country without any shots as it struggles to combat an aggressive coronavirus variant.

South Africa has more than 1.5 million confirmed cases of COVID-19, including at least 53,000 deaths, representing more than 30% of all the confirmed cases in Africa’s 54 countries. So far, it has only inoculated 290,00 health care workers, all with the J&J vaccine.

South Africa’s plans to begin large-scale vaccinations next month are dependent upon deliveries of millions of doses of the Johnson & Johnson and the Pfizer-BioNTech vaccines. The government said it expects to vaccinate 40 million of the nation’s 60 million people by February 2022.

The health minister said South Africa has not had any reports of blood clots in vaccine recipients, the issue that led the U.S. Food and Drug Administration on Tuesday to recommend a pause in the use of the J&J vaccine. Some health experts criticized South Africa’s move to follow the U.S. at such a critical juncture.

"I had expected the government in South Africa not to be perturbed by the findings from the U.S. I expected that there would not be any disruption,” Mosa Moshabela, professor of public health at the University of KwaZulu-Natal, told The Associated Press. “Johnson & Johnson is our only (vaccine) option currently. I really did not expect that we would need to pause."

He said it’s likely that South African health officials will be able to resume use of the J&J vaccines soon, although the disruption could contribute to vaccine hesitancy.

The National Health and Allied Workers, however, welcomed the pause to ensure the J&J’s product is safe, union spokesman Khaya Xaba said.

This is not the first abrupt change South Africa has made in its vaccination strategy. In February, the country scrapped its plans to give the AstraZeneca vaccine to its health care workers because a small, preliminary test showed that it gave minimal protection against mild to moderate cases of COVID-19 caused by the variant dominant in South Africa.

It was then that South Africa quickly pivoted to the use of the J&J vaccine. The country had already participated in an international clinical trial of the vaccine without any problems. The vaccine also has been found to have good efficacy against the variant dominant in South Africa.

The J&J vaccine is being given to South Africa's 1.2 million health care workers as a large-scale research study, because the vaccine has not yet been approved for general use in South Africa.

Rashika Alberlito, an intensive care unit administrator at a private hospital in Kwazulu-Natal province, was injected last month with the J&J vaccine. She is now extremely worried: she was hospitalized for nearly two weeks in 2015 because of a blood clot in one of her lungs. Alberlito remains on blood-thinning medication, and the news about the possible link between the J&J vaccine and blood clots concerned her.

"I asked about the safety of the vaccine given my condition, and I was assured it was safe,” Alberlito told The Associated Press. "That is why I was very shocked and worried to hear the announcement by the minister, but I hope the test results would confirm no causal link between the blood clots and the vaccine."

Like Alberlito, many South Africans are hoping the Johnson & Johnson vaccine will be deemed safe.

While acknowledging the importance of vaccine safety, professor Moshabela said it is urgent that South Africa vaccinate millions of people as soon as possible. He hopes the suspension of the J&J vaccine will not last long.

"In the meantime, you're going to have a lot of people who catch COVID, and some of them will die while you delay the (vaccine) rollout,” Moshabela said.

Potential problems with the J&J vaccine could affect all of Africa, as the African Union recently secured orders for 220 million doses of the vaccine to be used across the continent.

"The last thing that we want to have is any cloud of doubt around any vaccines in Africa and the world. It just strengthens that belief that vaccines are not safe on the continent of Africa, or in the world for that matter," Dr. John Nkengasong, director of the Africa Centers for Disease Control and Prevention, said in a webinar Wednesday.