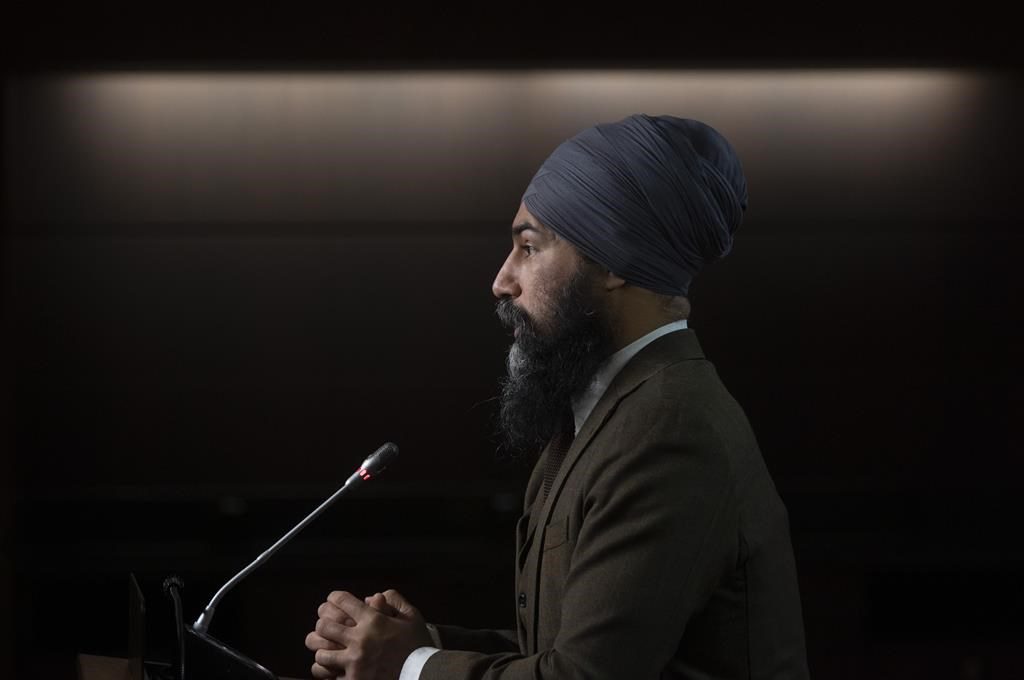 OTTAWA â€” Jagmeet Singh took aim at the Liberal government Sunday, firing an opening salvo that sounded strikingly like a campaign battle cry ahead of a possible election later this year.

Capping a three-day policy convention plagued with hiccups and frustrations, the NDP leader sought to unite the grassroots around a message of fair treatment, financial relief and Liberal failures during the COVID-19 pandemic.

His unwavering focus on the Grits stood in contrast to remarks from Prime Minister Justin Trudeau, who made nary a mention of New Democrats in his keynote speech at a Liberal convention Saturday.

Despite the drudgery of the online gathering, where the void of in-person energy was filled by testy points of order and a stream of social media complaints, Singh passed a vote on whether to hold a leadership review with flying colours, garnering 87 per cent support.

As the Liberals reiterate pledges on national pharmacare and child-care systems â€” the party has backed both ideas since the 1990s but made little headway on either â€” Singh is leading the NDP further left on a plan to cancel billions in student debt, eliminate for-profit long-term care and impose a wealth tax.

Part of that push zeroes in on the “rich,” a word that appeared 15 times in Singh’s speech, often right after “ultra.”

“We’re not actually in the same boat. We’re certainly in the same storm. But some of us are in leaky lifeboats, while others are in luxury yachts,” Singh said.

“Liberals continue to side with those in the yachts.”

Terry Beech, a Liberal MP and convention co-chair, responded by saying Trudeau Liberals are the only team with a plan to support Canadians and “keep people healthy and safe.”

“Canadians want a real plan with real solutions for real problems, and both Erin O'Toole's Conservatives and the NDP have shown that they just don't have one,” he said in a statement.

Singh also asserted that Liberals talk the talk on climate progress while “their actions go against it,” pointing to the government’s $4.4-billion purchase of the Trans Mountain pipeline but leaving out any mention of its carbon tax system.

Singh, speaking from an Ottawa production studio and backlit by images of the 42-year-old glad-handing Canadians, addressed more than 2,000 delegates assembled online to debate resolutions that will guide the NDP campaign platform.

He has consistently emerged as the most popular federal leader in recent polls, but the party itself often falls short of 20 per cent support.

If the three main opposition parties were to vote against the looming Liberal budget â€” set to be unveiled April 19 â€” the 16-month-old government would fall. Singh has promised his party won’t trigger an election while the pandemic persists.

Singh would be fighting for Liberal seats while also seeking to stave off challenges from Conservatives gunning for trade union votes and Greens explicitly targetting NDP supporters.

He took a parting shot at the Conservatives in Sunday’s speech, saying they “are no friends to workers” on issues ranging from sick leave to pharmacare and unions.

Singh’s speech also looked to shore up solidarity within the party at a convention that saw glitches and procedural delays threaten to sideline policy debate amid simmering tensions over how far left the party should tack.

Singh told reporters Sunday he supported the proposal and wasn't concerned it exposed him to charges of anti-Semitism, after B’nai Brith suggested it did.

“To achieve a peaceful resolution, we need to, as an international community, use our tools,” he said.

Singh affirmed his belief in Israel’s right to exist and said he is “vigilantly aware” that anti-Jewish hate resides across the political spectrum, adding that he is “someone you can count on to fight against any form of anti-Semitism.”

Delegates complained some of the convention’s initial sessions lacked closed captioning, sign language and translation services, prompting an apology from organizers and a promised refund for attendees living with disabilities.

Others spoke of perceived tensions between the party executive and the rank and file, as well as anxiety over the potential fight at the polls.

“There is far too much emphasis on top-down approach and gate-keeping to allow grassroots to flourish,” said Jessa McLean, a two-time NDP federal candidate from Ontario who ran unsuccessfully for party president.

“We are moments away from the writ being dropped, and most of us have no idea how to structure our campaign around mail-in ballots or how to organize digitally.”

Singh has said the party does not want an election but is ready for one, with a war chest roughly double that of the 2019 campaign.

He dismissed any impression of discord generated by the convention’s cut and thrust, with most resolutions that made it to the virtual floor passing by 95 per cent or more.

Non-binding resolutions voted into the policy book Sunday included proposals to implement all 231 recommendations made by the National Inquiry into Missing and Murdered Indigenous Women and Girls, as well as a plan to establish a publicly owned telecommunications company to expand high-speed internet access.

Earlier in the convention, delegates voted overwhelmingly to raise the federal minimum wage to $20, impose a one per cent tax on fortunes over $20 million, mandate at least seven days’ paid sick leave for federally regulated workers and weave long-term care into Canada’s universal health-care system â€” in part by eliminating for-profit models from the system.