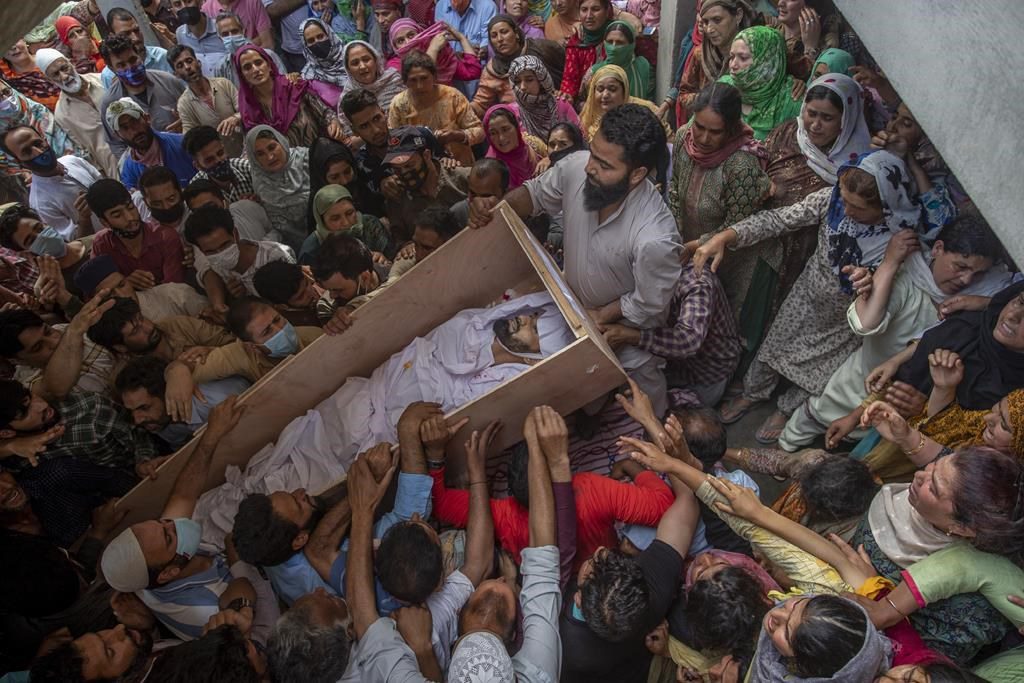 SRINAGAR, India (AP) — A heated gunbattle between militants and Indian police broke out Saturday in the disputed region of Kashmir, killing at least two police and two civilians, officials said.

Anti-India protests later erupted during the civilians’ funerals in Sopore, the northwestern town where the fighting took place, after local residents alleged police had shot and killed one of the civilians after the militants fled the scene.

Police director-general Dilbag Singh told reporters that militants had opened fire on a group of police who were enforcing coronavirus restrictions in the main market of Sopore, and police returned fire.

Amid the shooting, Singh said two civilians and two policemen were killed, while two officers and a civilian were injured. He spoke during a wreath-laying ceremony for the slain police personnel in Srinagar, the region’s main city.

Police in Kashmir could not immediately be reached for comment on the allegation that a civilian was killed after the militants had fled.

Manzoor Ahmed Laway, a fruit vendor, told The Associated Press that a police vehicle arrived in the market as his business partner went to have a cup of tea. “The vehicle came under attack and he was shot in the crossfire,” Laway said.

Hundreds of people participated in separate funerals for the dead civilians in Sopore, where mourners chanted pro-rebel and anti-India slogans and called for an end to Indian rule over Kashmir.

Muslim-majority Kashmir is divided between India and Pakistan, and the Himalayan region is claimed by both in its entirety. Rebels have been fighting against Indian rule since 1989.

Most Muslim Kashmiris support the rebel goal that the territory be united either under Pakistani rule or as an independent country.

New Delhi deems Kashmir militancy to be Pakistan-sponsored terrorism. Pakistan denies the charge, and most Kashmiris call it a legitimate freedom struggle.

Tens of thousands of civilians, rebels and government forces have been killed in the conflict.