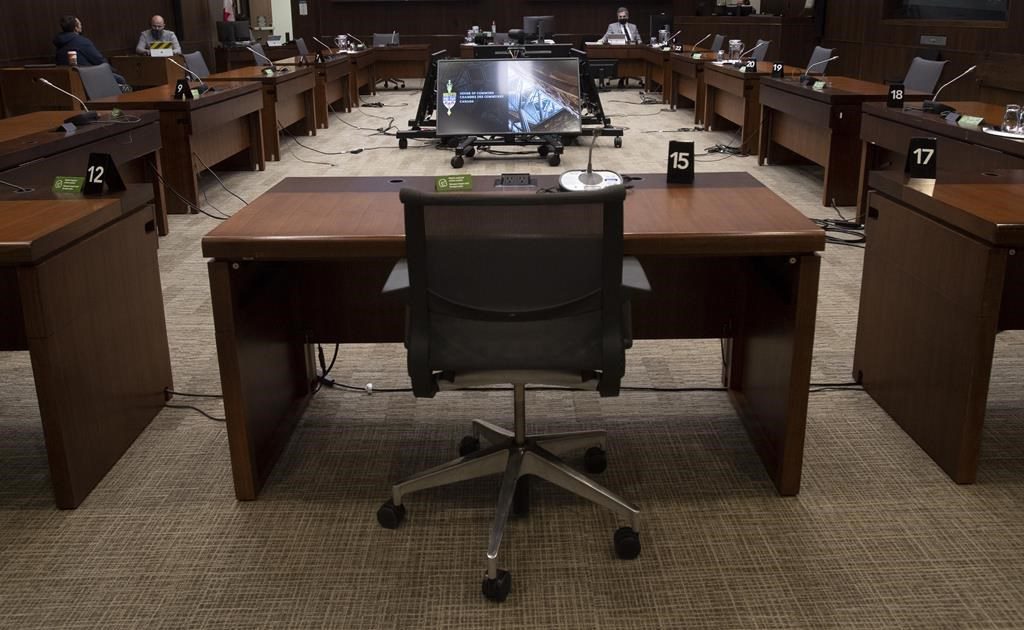 OTTAWA â€” Melissa Lukings was in the middle of sharing her expertise in cybersecurity and her lived experience as a former sex worker during a Commons committee hearing earlier this month when the meeting suddenly devolved into a confusing melee of partisan bickering.

Instead of focusing on Lukings’s testimony and asking her questions, Liberal MP Brenda Shanahan instead used her allotted time with the witnesses to table a motion.

The motion, ironically, called for the committee to “hear from further witnesses at its next scheduled meeting for a minimum of two hours.”

“What kinds of witnesses?” Lukings asked from her seat in the virtual meeting.

But she no longer had permission to speak and said her video link was muted.

After a 40-minute adjournment, during which time Lukings said MPs were shouting at each other, the meeting abruptly ended.

“You’re sitting there in front of all these people who you know are in Parliament who can mute you, who can all of a sudden say, ‘No more talking. We have to cut off the feed … No, you don’t get to ask any questions, no, you don’t get to know why,’ ” she said in an interview.

“It was ignorant and rude and pretty offensive, honestly.”

The meeting was one of several Commons committees that have been calling witnesses â€” mainly women â€” who have been victims of sexual assault, exploitation and trauma, and inviting them to share their experiences and recommendations for change.

Members of Parliament are bound by conventions that make the process extremely regimented, including limited amounts of time to speak. But a growing number of victim advocates believe committees should develop a more trauma-informed approach to dealing with vulnerable witnesses.

The experience and the way she was treated at other points in the meeting by MPs has left Lukings so angry, she said she would discourage others from putting themselves through a similar experience.

“It’s re-victimization. That’s what they didâ€¦ because they’re talking over you and they’re reinterpreting your own experience and that is a very, very huge reason why I would not recommend people participate in committees now.”

Testimony shared by women invited to relate their experiences has been far more emotionally charged and graphic than the normally dry Parliamentary hearings, which traditionally call on scholars, community leaders and bureaucrats.

Julie Lalonde, a sexual violence prevention educator, says she was disturbed by the way women who were sharing their deeply personal stories of sexual assault were continually being cut off for time by MPs during their testimony.

This happened several times at a meeting Lalonde took part in April 8 alongside two women who experienced rape and sexual trauma during their time in the military.

“To be cutting people off because you have this parliamentary procedure that says you have a minute-and-a-half to ask a question and get an answer so everybody gets a turn, I really think they need to revisit that,” Lalonde said of the committee’s rules.

Christine Wood, a spokeswoman for the group It’s Just 700, which led a class-action lawsuit against the federal government over sexual violence in the Armed Forces, also took part in the April 8 meeting.

As she was explaining how the fallout of the trauma she endured while serving as an Air Force reservist led to a host of medical issues including post-traumatic stress disorder, she stopped suddenly and went quiet.

“I’ll stop there. This is all happening really quickly. I’m not used to this kind of quick back-and-forth. I’m sorry if I’m taking too much time.”

The committee chair, Conservative MP Marilyn Gladu, told Wood she was “doing very well,” but then jumped to the next MP in line for a question without checking in with Wood to see if she was OK to continue.

“A lot of people presenting are deeply traumatized, so their capacity to hear a question off-the-cuff and answer off-the-cuff is compromised by the state that they’re in, and there’s no recognition of that in the moment itself,” Lalonde said.

“You’re asking folks to pour out their hearts and prove that their experiences of trauma are real, but you have to do it under these parameters that are, frankly, arbitrary… I’m baffled by the idea that this is just how it has to be. Because it doesn’t have to be that way.”

Tamara Cherry, a former crime reporter who now provides training and support to victims who want to tell their stories to the media, says many survivors can become re-traumatized by certain kinds of questions and approaches.

She noted that victims involved in criminal court cases in many provinces are provided with a support person who walks them through the court process and helps prepare them for what to expect.

If the criminal justice system, which has long come under fire for the way it treats victims of sexual assault, has developed some tools to support victims, Parliament can develop better strategies as well, she said.

“Testifying before a parliamentary committee has its own structure and time constraints, and this can be very jarring and even triggering for some survivors,” Cherry said.

Not only should MPs and senators be trained in more trauma-informed approaches to questioning and preparation, committees should also provide a support person to guide and assist vulnerable witnesses, Cherry said.

“If a witness is being called to share their trauma for the betterment of society, there should be supports in place to ensure they’re not further victimized by this process.”

Heather Bradley, the director of communications for the Speaker’s office, said witnesses invited to speak at committees are usually “individuals who have already discussed their experiences publicly,” which is how MPs often identify them as potential witnesses.

“With that said, committees have the option of hearing testimony in camera and of redacting any personal information from its records to protect the witnesses,” Bradley said in a statement.

“This is usually done upon request by the witness, though in some cases the committee will take steps ahead of time to ensure the anonymity of its witnesses.”

Committee clerks may also ask for the assistance of “health professionals within the House of Commons administration to offer arrangements as required,” which could involve mental health professionals being present prior to and following testimony, Bradley added.

The women who spoke to The Canadian Press for this story say they were not offered any supports or referrals to professionals, before or after the meeting.

They each said the only support they were offered was technical, as witnesses currently appear virtually due to COVID-19.

Lukings says she was told she had to purchase a specific type of headset at her own cost prior to her appearance to ensure translators and MPs could hear her.

“I was really frustrated after, because I did so much work, I did so much prep, I put so much time into this and I showed up legitimately believing that I was invited, because I thought they wanted me there, and it was a lie. It was optics.”