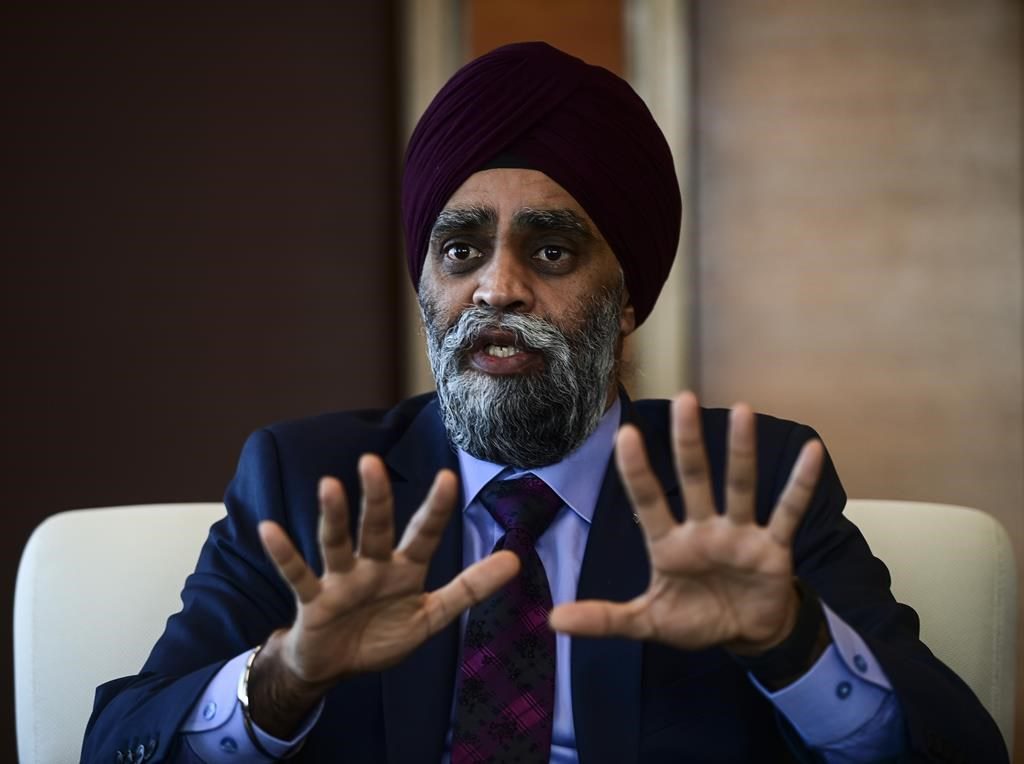 OTTAWA â€” Defence Minister Harjit Sajjan took aim at recent Chinese military expansions into the South China Sea on Monday, even as he pushed back against Conservative allegations that the Liberal government has been pandering to Beijing.

The defence minister was appearing before the House of Commons' special committee on China, where he used his opening statement to voice Canada's opposition to Chinese claims over what much of the world considers international waters.

"Canada opposes land reclamation projects and building outposts in disputed areas for military purposes," he added in reference to China's construction of military facilities on several islands and atolls.

"And we will continue supporting our allies and partners in the Asia Pacific region, especially in the face of unilateral actions that undermine peace and stability."

The Department of National Defence confirmed two weeks ago that a Canadian warship sailed through the South China Sea at the end of March while travelling from Brunei to Vietnam.

The Defence Department says HMCS Calgary was shadowed for at least part of the voyage as it passed near the disputed Spratly Islands, which both China and the Philippines claim and where the Chinese military has set up facilities and equipment.

Conservative committee members, however, were more interested in pressing Sajjan on a media report that the Liberal government threatened to cut the funding of a major defence conference held each year in Halifax because of China.

Politico reported over the weekend that the threat revolved around the Halifax International Security Forum's move last year to give an award to Taiwanese President Tsai Ing-Wen.

Beijing does not recognize Taiwan as a country, but instead considers the island off China's east coast to be a rogue province. The Chinese government has long warned other countries against recognizing Taiwan or establishing diplomatic ties with it.

Sajjan said the Halifax International Security Forum chooses who to award, but he otherwise sidestepped questions about whether the government had threatened to cut off the security forum's funding if it went to Tsai.

"We have supported this forum since the time that we came into government," he said. "And as I stated, it is not our decision to award this. It is the decision by the forum itself in the organization to make that decision on their own."

The organization received $3.3 million in federal funding each year in 2018 and 2019, which was an increase from earlier contributions.

Halifax International Security Forum vice-president Robin Shepherd confirmed in an email Monday that last year's winner of the John McCain Prize for Leadership in Public Service has yet to be announced.

But Conservative member John Williamson suggested the Liberal government was looking for an excuse to cancel the conference when Sajjan at one point noted the forum was headquartered in Washington, D.C., and employed "former Conservative staffers.

"This award that is being proposed … gives you an excuse to do just that," Williamson said. "To cut its funding while maintaining your close relations with Beijing."

Sajjan insisted he supported the forum.

Canadian diplomats were worried the decision would aggravate China or endanger Michael Kovrig and Michael Spavor, who have been held by China for more than two years in apparent retaliation for Canada's arrest of Huawei executive Meng Wanzhou.

The committee heard the exercise in February involved five Chinese military observers ranging in rank from sergeant to major-general, and Sajjan suggested he was responsible for cancelling the exercise after the two Michaels were arrested.

Sajjan went on to accuse Stephen Harper's Conservative government of having initially approved the Chinese military's involvement, and that he didn't know about the exercise until it was brought to his attention.