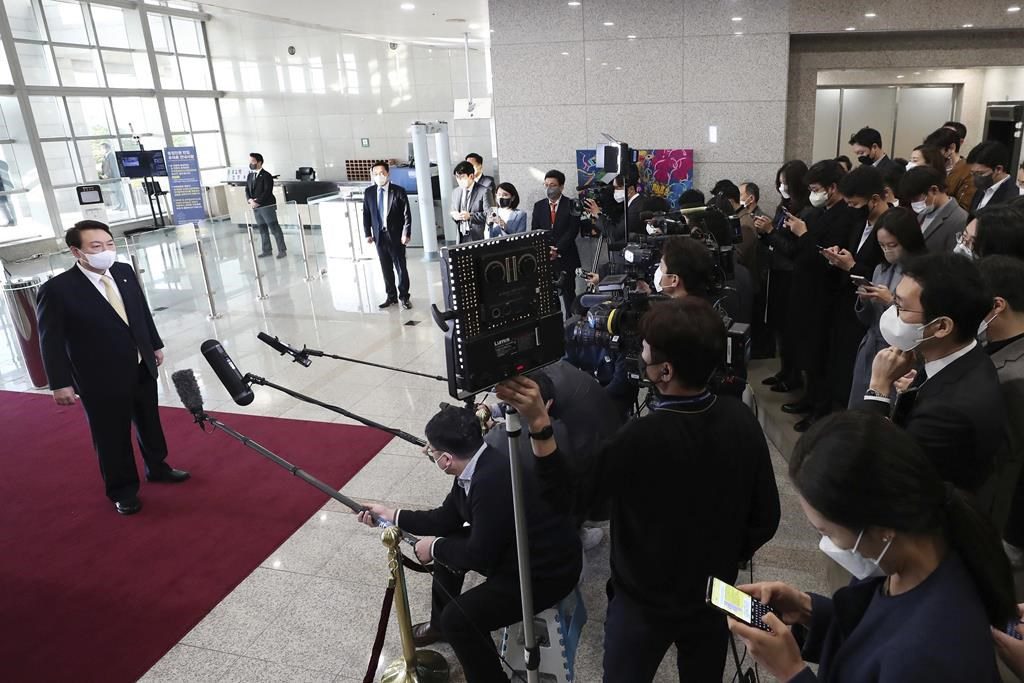 SEOUL, South Korea (AP) — South Korea’s new president has suspended his unusual morning Q&A sessions with journalists after squabbling with a broadcaster over its coverage of his remarks caught on a hot mic in the United States.

Since taking office in May, Yoon had regularly received questions from reporters at the lobby of the presidential building on the way to his work in the morning. The so-called “door-stepping” sessions were highly unusual in South Korea, where many of Yoon’s predecessors faced criticism that they shunned meetings with journalists to avoid sensitive questions.

Yoon, a conservative former top prosecutor, had promised during his presidential election to improve communication with the public. He even relocated the presidential office to the current Defense Ministry compound by abandoning the previous mountainside Blue House, whose structure and location he said contributed to past leaders being cut off from the public and wielding “imperial power.”

But on Monday, his office said in a statement that “a recent unsavory incident” has led it to have determined the Q&A session cannot be maintained.

“The ‘door-stepping’ was initiated for the sake of the open communications with the public. We will consider whether to resume it if some measures that can meet its objective well are arranged,” the statement said.

The “unsavory incident” referred to an altercation between one of Yoon’s aides and a reporter from the MBC television network over his office’s decision to ban MBC crew from the media pool on his presidential plane heading to Cambodia and Indonesia for summits earlier this month.

Yoon’s office said MBC was banned because of its “repeated distortion and biased reporting” on diplomatic issues. The broadcaster taped Yoon talking to his aides following a brief meeting with President Joe Biden at a conference in New York in September. While some parts of the audio were unclear, Yoon could be heard using some indecent language.

MBC added subtitles reading: “Wouldn’t it be too darn embarrassing for Biden if those idiots at legislature don’t approve?” Yoon has denied he referred to Biden or the U.S. Congress.

During Friday’s “door-stepping” session, Yoon defended the MBC ban as inevitable, accusing MBC of “very malicious acts” to drive a wedge between South Korea and the United States with fake news. As Yoon was leaving the scene, an MBC reporter shouted at his back saying that “What malicious acts did MBC do?” Then, the MBC reporter and one of Yoon’s aides had an angry exchange of words, which quickly went viral on social media and provided fodder for political wrangling between his supporters and opponents.

Some journalists’ organizations and Yoon’s liberal rivals have criticized the MBC ban as threatening the freedom of press in South Korea. Yoon’s supporters said MBC brought the ban upon itself because of its unfairness in reporting.

Yoon is a political novice, having spent most of his professional career as a prosecutor before entering local politics last year and winning the hotly fought presidential election this March. Some credited his “door-stepping” sessions for showing his efforts to become a different leader and improving communications, but others said his unprepared, unfiltered comments contribute to his relative low approval rating as a new president.