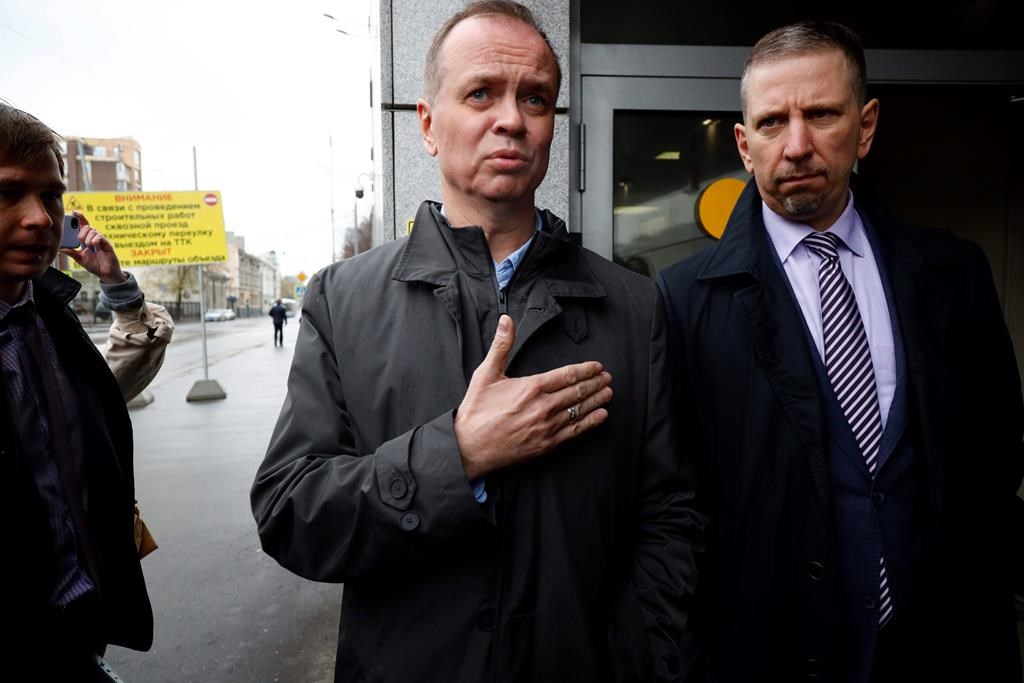 MOSCOW â€” Russian authorities have launched a criminal probe against a lawyer representing a former Russian journalist accused of treason and the team of imprisoned opposition leader Alexei Navalny, accusing him of disclosing information related to a police investigation.

St. Petersburg-based lawyer Ivan Pavlov told reporters Friday he was formally charged with the criminal offence, punishable by a fine, community service or detention of up to three months, after his Moscow hotel room was raided on Friday morning and he was summoned to Russia’s Investigative Committee for interrogation.

Pavlov was ordered to appear in a Moscow court later on Friday for a hearing on pre-trial restrictions. According to the court’s press service, the authorities are seeking to bar Pavlov from using the internet and communicating with witnesses in his criminal case.

Pavlov’s colleague, Yevgeny Smirnov, had reported that the lawyer was detained. But Pavlov’s spokesperson, Yelizaveta Alexandrova-Zorina, later clarified to The Associated Press that Pavlov formally wasn’t arrested even though he was de-facto detained in his hotel room during the search.

Opposition supporters, independent journalists and human rights activists have been facing increasing government pressure in Russia. Raids targeting Pavlov and his team elicited outrage in the Russian legal and human rights community, with prominent lawyers and legal aid groups calling on authorities to stop "using the law as a tool of pressure on lawyers."

Pavlov said the accusations against him were connected to his defence of Ivan Safronov, a former Russian journalist charged with treason in a case that has been widely seen as retribution for his journalistic work. He said he was targeted because he shared information about the case with the media.

"The investigators maintain that I committed a crime when I told you, reporters, that your colleague is being unlawfully held in Lefortovo (pre-trial detention centre) on absurd accusations," the lawyer said.

Safronov, who wrote about military and security issues for a decade before becoming an adviser to Roscosmos head Dmitry Rogozin, was detained last year and accused of passing military secrets to Czech intelligence. Many journalists questioned the charges, and his former newspaper openly rejected them as "absurd."

Safronov’s former colleagues alleged that authorities may have sought revenge for his reporting that exposed Russian military incidents and opaque arms trade deals. Safronov has remained in pre-trial detention since July.

Pavlov had been due to appear in a Moscow court on Friday at a hearing about extending Safronov’s pre-trial detention. The lawyer said police unlawfully seized "almost the entire dossier" of documents related to the case during the hotel room raid, including those subject to attorney-client privilege.

According to his colleague Smirnov, Pavlov frequently received threats from investigators at Russia’s Security Service, or FSB, with an investigator involved in the case against the former journalist allegedly saying to the lawyer, "We’re going to do everything to put you behind bars.”

Pavlov maintained his innocence and said he considered the case against him "revenge" for his work on cases investigated by the FSB.

The case against Pavlov was opened shortly after he started representing the Foundation for Fighting Corruption, founded by President Vladimir Putin’s longtime foe, opposition leader Navalny.

This month, the Moscow prosecutor's office petitioned the Moscow City Court to outlaw Navalny's foundation and his network of regional offices as extremist groups. The move is part of a sweeping crackdown on Navalny, his allies and his political infrastructure.

Navalny is currently serving time in a penal colony outside Moscow. He was arrested in January upon his return from Germany, where he had spent five months recovering from a nerve agent poisoning he blames on the Kremlin. Russian officials have rejected the accusations.