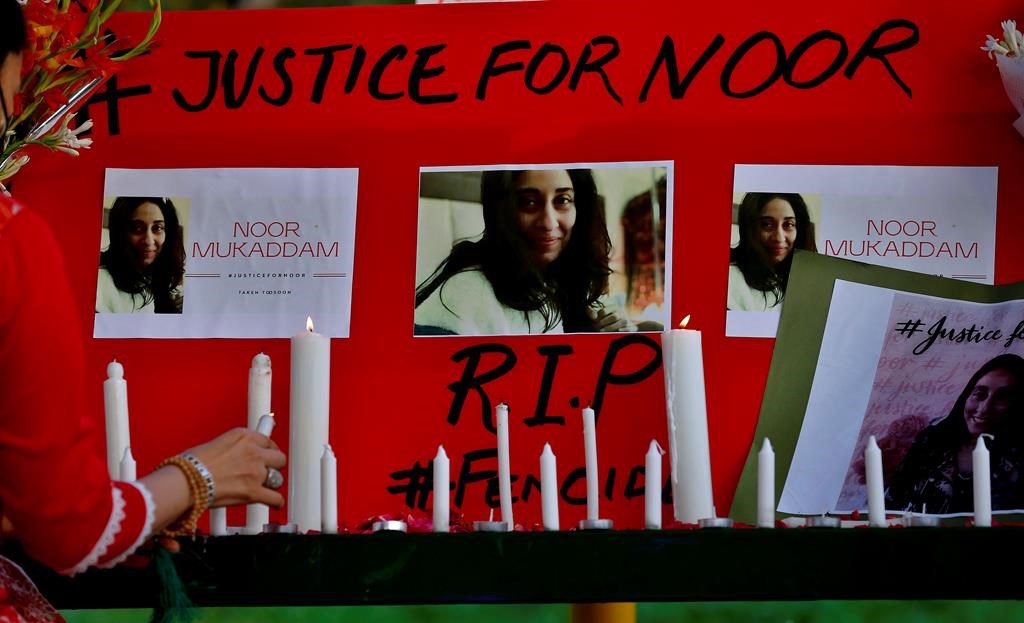 ISLAMABAD (AP) — Noor Mukadam’s last hours were terror-filled. Beaten repeatedly, the 27-year-old jumped from a window but was dragged back, beaten again and finally beheaded. A childhood friend has been charged with her killing.

The gruesome death last week in an upscale neighborhood of the Pakistani capital, Islamabad, is the latest in a series of attacks on women in Pakistan, where rights activists say such gender-based assaults are on the rise as the country barrels toward greater religious extremism.

Mukadam was the daughter of a diplomat, and her status as a member of the country’s elite has shone a spotlight on the relentless and growing violence against women in Pakistan, said prominent rights activist Tahira Abdullah. But the majority of women who are victims of such violence are among the country’s poor and middle classes, and their deaths are often not reported or, when they are, often ignored.

“I could give you a list longer than my arm, only in one week” of attacks against women, said Abdullah. “The epidemic of sexual crimes and violence against women in Pakistan is a silent epidemic. No one sees it. No one is talking about it.”

Still, Pakistan’s Parliament this month failed to pass a bill that seeks to protect women from violence in the home, including attacks by a husband. Instead, it asked an Islamic ideology council to weigh in on the measure — the same council that previously said it was OK for a husband to beat his wife.

In 2020, Pakistan was near the bottom of the World Economic Forum’s global gender index, coming in at 153 of 156 countries, ahead of only Iraq, Yemen and Afghanistan, which held the last spot despite billions of dollars spent and 20 years of international attention on gender issues there.

Many of the attacks in Pakistan are so-called honor killings, where the perpetrator is a brother, father or other male relative. Each year, more than 1,000 women are killed in this way, many of them unreported, say human rights workers.

“The authorities have failed to establish adequate protection or accountability for abuses against women and girls, including so-called ‘honor killings’ and forced marriage,” according to the HRW report.

Rights groups have been sharply critical of Pakistani Prime Minister Imran Khan and his government, saying he panders to the religious right and excuses the perpetrators of attacks on women.

A former cricket star who has married three times, Khan once had a reputation as a womanizer but has now embraced a conservative Islam. He keeps close ties with a religious ceric who blamed COVID-19 on “the wrongdoing of women.” He once appeared to blame women for attacks by men saying, “if you raise temptation in society … all these young guys have nowhere to go, it has consequences in the society.”

His information minister, Fawad Chaudhry, says Khan’s statements have been taken out of context and denied violence against women is on the rise, without offering evidence. He said his government encourages women in politics and sports and in provinces where Khan’s party dominates human rights legislation has been strengthened.

“I think this perception is not really close to reality, that in Pakistan women are not safe or maybe that there’s a misogyny in practice in Pakistan,” Chaudhry said in an interview.

Yet last week, one of Khan’s Cabinet ministers, Ali Amin Gandapur, told a rally of thousands of mostly male supporters, that he would “slap and slap” a female opposition political leader.

Last September, a senior police officer blamed a woman who was ambushed and gang raped in front of her two children, saying she should not have been travelling at night and without a man.

Such remarks reflect an increase in ultraconservative and even extremist religious values in Pakistan, said Amir Rana of the Pakistan Institute of Peace Studies.

The country has seen an explosion of religious organizations and religious political parties, many with extreme beliefs, said Rana, whose organization tracks and documents extremism in Pakistan.

These organizations have tremendous reach in most cities and towns, where they provide services from education to health care, and thus have extensive ability to influence social values, said Rana.

The history of religious extremism in Pakistan is complicated, and Chaudhry, the information minister, argued that America shares responsibility for the role it played in the region in the 1980s. At that time, Pakistan’s military dictator aided by the U.S. used religious fervor to inspire Afghans to fight an invading Soviet Union. Many of those Afghans ended up in Pakistan as refugees.

“And very conveniently now, the U.S. media and U.S. authorities … blame everything on Pakistan and have left the region,” he said.

But Abdullah, the rights activist, said Pakistan cannot shirk its own responsibility, noting that same dictator, Gen. Mohammad Zia-ul Haq, introduced Islamic laws that, among other things, reduced women’s rights to inheritance, limited the value of their testimony in court and made reporting a rape almost impossible by requiring four male witnesses.

In Mukadam’s assault, police have charged Zahir Jaffar, the son of a wealthy industrialist, with murder. Initial reports say she was killed after spurning his marriage proposal. It’s not clear whether Jaffar has a lawyer.

The brutality of the assault — the attacker used so-called brass knuckles — and the fear that his high social status means he could be freed, galvanized many in Pakistan to speak out. They have held protests and a candlelight vigil and launched a social media campaign #justicefornoor to preempt attempts to use influence and money to whisk the accused out of the country.

Zarqa Khan, a student who attended a candlelight vigil for Mukadam, bemoaned how religion now pervades so much of life in Pakistan and how today she fears walking alone on the streets.

“I just didn’t feel safe outside anymore,” said Khan. “And that shouldn’t be the scenario.”