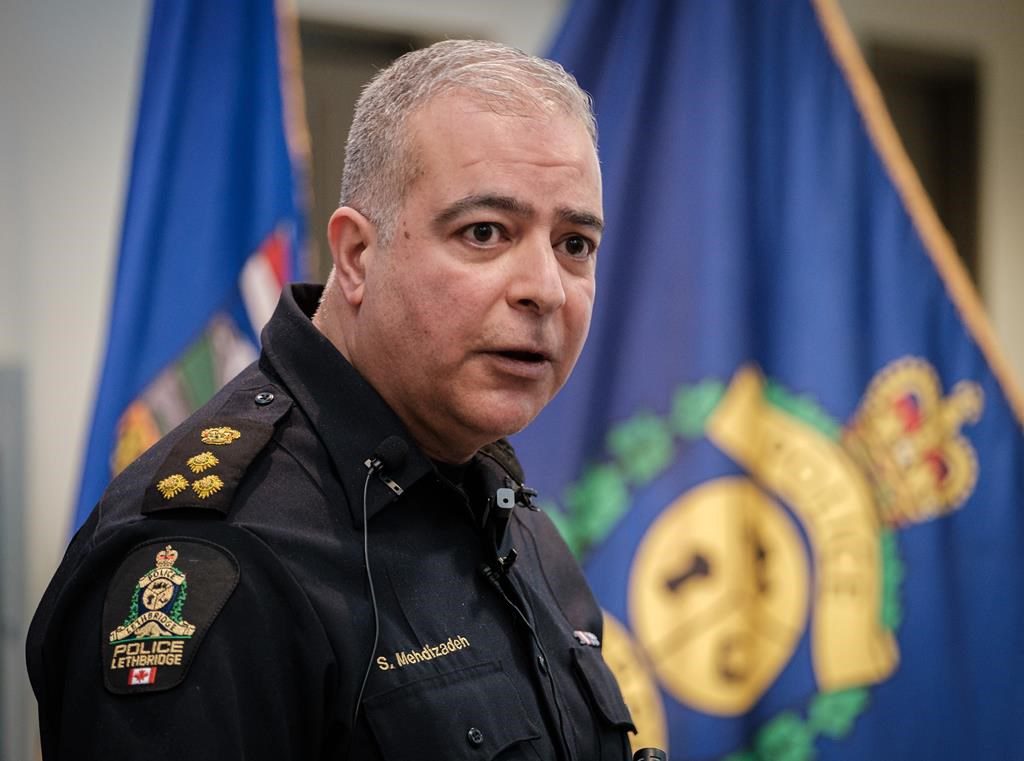 LETHBRIDGE, Alta. â€” The police chief in Lethbridge, Alta., has delivered a plan to the province’s justice minister aimed at fixing problems that led to a threat the service could be disbanded.

In an open letter to Lethbridge residents, Mehdizadeh said the service is on the right path moving forward, but needs to look at mistakes made by some employees in the past.

“This report addresses a number of key areas for improvement for the Lethbridge Police Service and outlines how we will move forward in the coming weeks, months and years,” he writes.

“We have all seen the negative publicity the Lethbridge Police Service has received as of late. As a result, some citizens may be questioning the ethics and integrity of the men and women who serve you every day.”

In an email, the Justice Department confirmed it had received the plan and is “taking the time necessary to review it to ensure it meets the expectations set out in the Minister's letter from last month.”

Madu has said that change needs to happen immediately and that there are serious problems that need to be addressed.

He said any plan had to address everything from recruiting to oversight, have benchmarks and timelines, and be communicated to the public. If not, Madu advised the force could be disbanded.

The most critical area falls under ethics and accountability and includes management of conduct files, annual ethics training and a review of the police service’s social media policy.

Last year, two officers were temporarily demoted after a review determined NDP legislature member Shannon Phillips, while environment minister in 2017, was surveilled and photographed at a diner. The officers involved were concerned about changes Phillips was making regarding off-highway vehicle use at a nearby wilderness areas.

Separately, five officers and one civilian are now being investigated for allegations of conducting improper database searches on Phillips while she was in cabinet in 2018.

Part of the plan involves developing better leadership in current and future police members and restrictions on access to database searches.

“We will strive every day to keep your trust. I want to make a commitment to every citizen that we are on the right path moving forward,” Mehdizadeh said.

Lethbridge Mayor Chris Spearman issued a statement thanking the police chief for “his honesty and forthrightness.”

“Your willingness to tackle issues that have precluded your time as Chief, as well as the integrity you bring to work each and every day has positioned the police force well for future success” Spearman said.

Lethbridge is Alberta’s third-largest city with a population of more than 100,000.

Its police force has been the focus of numerous controversies.

Last month, five police employees were suspended with pay as part of an investigation into the circulation of inappropriate images, reportedly including pictures of senior police staff pasted onto the bodies of characters from the animated “Toy Story” movies.

Last year, the force was criticized for the violent takedown of a citizen wearing a “Star Wars” storm trooper costume and brandishing a toy laser blaster.

The year before that, images went viral of a Lethbridge officer euthanizing a deer by running over the wailing animal numerous times with a police truck.

Rob vanSpronsen, chairman of the Lethbridge Police Commission, said it has worked with the police service on addressing policing in the city.

“I have been consistently impressed with (the force’s) willingness to look in the mirror and make changes in the name of continuous improvement. The Lethbridge Police Service of 2021 is not the same as it was in 2018,” vanSpronsen said in a statement.