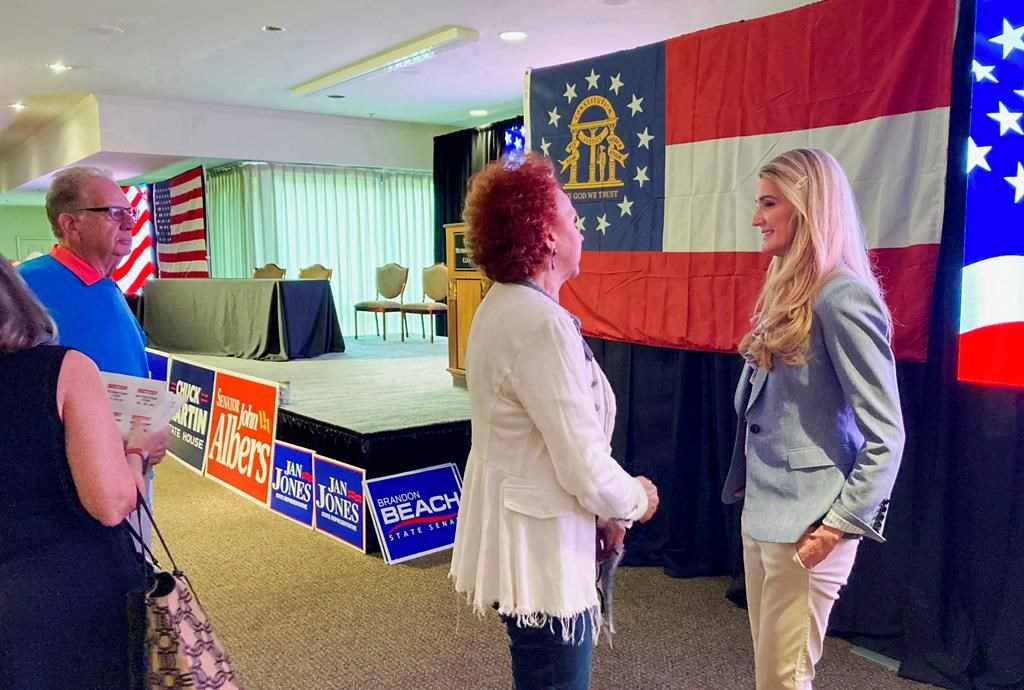 The former U.S. senator from Georgia, defeated in a January runoff amid Republican infighting, told her hometown GOP committee Saturday that only a unified party can avoid a repeat in the 2022 midterms.

"What I saw in my campaign is that we need to do better. We just need to get to work doing it," Loeffler told Fulton County Republicans at their annual convention.

Yet Republicans can't seem to get past 2020.

In the hours after Loeffler's plea, at least 10 local party committees voted to condemn Gov. Brian Kemp, Secretary of State Brad Raffensperger or both for not helping overturn President Donald Trump's November defeat. Two counties already had done so. Additionally, Georgia GOP Chairman David Shafer eagerly noted in his rounds to local conventions that he's sued "a Republican secretary of state." And in Fulton County, the state's most populous, a flood of new delegates ousted several incumbent officers despite their pledged fealty to Trump.

The tension reflects the former president's ever-tightening grip on the Republican Party and suggests that even unabashed conservatives like Kemp are at the mercy of continued finger-pointing and competition to be the loudest echoes for Trump's false assertion of a rigged 2020 election.

Kemp and Raffensperger were both the targets of Trump's ire after they certified Democrat Joe Biden's narrow win in Georgia. Some counties added demands that Raffensperger resign.

A Kemp aide focused on how few counties out of 159 have formally condemned the governor, saying he’s "grateful" for grassroots support and looks forward to a primary campaign where he can tout his "successful record." A Raffensperger aide did not respond to a request for comment.

Indeed, the pair staved off some condemnations. Gwinnett County, part of the metro Atlanta core, voted down the measures. A handful of other counties, including Fulton, censured Raffensperger but had no floor vote at all on Kemp. Other counties avoided votes altogether when they adjourned because too few delegates remained to conduct business after long days.

The trend nonetheless shows Kemp has work to do to shore up his right flank ahead of 2022.

"I'm disappointed in Kemp, and I'd absolutely consider someone else," said Ruth Anne Tatum, a retired Alpharetta schoolteacher who was among the scores of first-time delegates to attend the Fulton County convention.

Tatum said she travelled to Washington for the Jan. 6 rally in which Trump addressed supporters before some of them stormed the U.S. Capitol as Congress tallied Biden's Electoral College victory. She said she was not among the insurrectionists but argued that the event has been unfairly pinned on Trump.

"I'm so tired of all the lies and the corruption and the cheating," Tatum said, pointing at Democrats and Republicans alike. "All of them," she said.

Debbie Dooley, an activist who helped organize the resolutions, said the votes are enough to show Kemp faces a "divided grassroots" that should make establishment Republicans nervous.

Indeed, Kemp’s 2022 prospects aren’t just about whether he can win nomination for a second term. He remains a solid favourite. His only opponent thus far, Vernon Jones, is a former Democrat best known as an outspoken Black supporter of Trump. And Kemp boosted his standing by signing the recent Georgia election law overhaul and defending it against criticism from liberals and corporate leaders.

Yet Trump's loss â€” followed by Loeffler's and Sen. David Perdue's losses in January â€” show how perilous a Trump-branded party is in Georgia. Distancing yourself from Trump costs votes within the GOP core, while hugging Trump too tightly juices the left and costs votes in the middle, especially among moderates in metro Atlanta.

"I don't know what it's going to take to get past it," said Trey Kelly after he lost his bid for another term as Fulton GOP chair. Earlier, he’d stood behind a sign dubbing Georgia "Trump country" and declared loudly to 330 delegates â€” a local record for an open convention, according to party officials â€” that "the 2020 election was stolen."

He even called Fulton, long a Democratic bastion, "the U.S. capital of voter fraud."

His opponent, Susan Opraseuth, likewise panned "an unconstitutional election," but she threw in her outsider, anti-establishment status that Kelly couldn't counter. "Our current trajectory demands change," she said, following the roadmap Trump used in 2016 and that Kemp followed in 2018.

The chair’s election required two rounds of voting after Opraseuth delegates disputed results that showed Kelly prevailing. She then won a second tally. Along the way came shouts of "cheating" by Opraseuth delegates, while Kelly's establishment supporters huddled in frustration.

Shafer, the state chairman, said local wrangles shouldn't obscure what he says is a strong position for Kemp.

The chairman differentiated the governor from Raffensperger, whose mention was booed repeatedly Saturday.

"The governor fulfilled a ministerial role only," Shafer said, referring to state law requiring that Kemp ratify Biden's Electoral College slate once Raffensperger certified the Democrat's victory. Raffensperger, alternately, used his post before the election to expand absentee ballot access in ways Trump, Shafer and others insist opened the outcome to fraud.

If there's anything that could stitch the internal GOP fissures, it could be Democrats nominating voting rights advocate Stacey Abrams for a rematch of 2018. At the Fulton convention, Abrams name flowed from the stage perhaps more than any Republican.

"We have to take on the Abrams machine," Loeffler declared in her opening remarks. "If we let up, they're gonna win."

But the former senator wasn't around for the tense work of choosing her local GOP officers or deciding whether to condemn her fellow Republicans. Soon after speaking, she left the building.