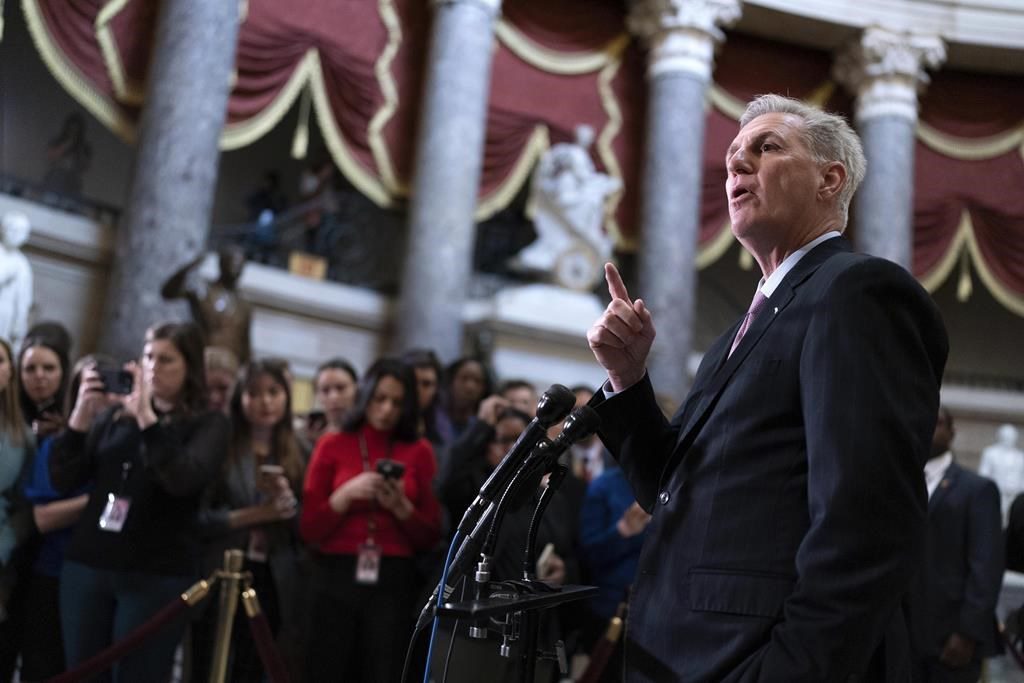 WASHINGTON — It’s become a reliably consistent sideshow in U.S. congressional politics: Democrats and Republicans battling over a self-imposed limit on federal borrowing, a feud that often leads to standoffs and protracted government shutdowns.

But with Republicans in control of the House of Representatives and a clutch of Donald Trump acolytes having secured outsized influence over their new leader, Speaker Kevin McCarthy, there are worries that this time, common sense may not prevail.

“It is therefore critical that Congress act in a timely manner to increase or suspend the debt limit,” Treasury Secretary Janet Yellen wrote last week in a letter to congressional leaders.

“Failure to meet the government’s obligations would cause irreparable harm to the U.S. economy, the livelihoods of all Americans and global financial stability.”

Yellen made clear in that letter that Treasury still has some tricks up its sleeve — “extraordinary measures” to restrict investments in various civil servant retirement funds, mainly — that would take the government to about early June.

And McCarthy is sounding like a man willing to use all the time at his disposal.

“We are six months away, approximately,” McCarthy said Tuesday, 10 days after a bruising leadership vote that went to 15 ballots and forced him to acquiesce to the demands of some hard-right caucus members.

“I would like to sit down with all the leaders, and especially the president, and start having discussions.”

Republicans have persistently tried to portray President Joe Biden as a free-spending, tax-happy Democrat, and plan to use their new leverage to wring spending cuts out of the White House, particularly on entitlement programs like health care and Social Security.

But there’s more on the line, White House press secretary Karine Jean-Pierre said Tuesday, rattling off a laundry list of areas that could be in for a haircut, including border security, food safety, drug enforcement efforts and school lunch programs.

Democrats are standing their ground, warning that a debt-limit debate would be playing with fire. A default, they say, would burn down the house, triggering a severe recession and job losses at home, market chaos around the world and paralyzed credit markets.

“Failing to deal with the debt limit would cause economic catastrophe,” Jean-Pierre warned. “Congress needs to act and do so swiftly. There is no excuse for political brinksmanship when American jobs and economic safety is on the line.”

McCarthy, for his part, says all he wants to do is develop a plan to reduce the debt, balance the budget and put a stop to what he considers profligate spending justified by the need to recover from the COVID-19 pandemic.

Democrats in the majority on Capitol Hill increased discretionary spending by 30 per cent over the last four years, with plans to spend an additional $10 trillion over the next 10, he told Fox News over the weekend.

“What I really think we would do is treat this like we would treat our own household,” McCarthy said.

“If you had a child, you gave them a credit card, and they kept hitting the limit, you wouldn’t just keep increasing it. You would first see, ‘What are you spending your money on? How can we cut items out?'”

But on Tuesday, he also sounded a more measured note: “Who wants to put the nation through some type of threat at the last minute with the debt ceiling? Nobody wants to do that.”

“Canada will always work to make sure that we are able to weather any storm that the United States deliberately or inadvertently throws our way,” he said.

“We continue to watch closely what’s going on in the United States. But we’re going to make sure that Canadians continue to succeed regardless of what happens down there.”

Debt-limit stalemates are nothing new in U.S. politics — at least not since the 1990s, when Republican House Speaker Newt Gingrich squared off twice with President Bill Clinton in 1995 and 1996. Since then, they’ve become a regular occurrence, though never as dramatic as in 2011 when the standoff earned the U.S. its first ever credit downgrade.

This time, however, the post-Trump Republicans in the House — the so-called “Freedom Caucus,” which includes the likes of Marjorie Taylor Greene, Matt Gaetz and Lauren Boebert — represent a wild card, said Kristen Hopewell, a public policy professor at the University of British Columbia’s School of Public Policy and Global Affairs.

“What we’re seeing manifest, essentially, is playing a game of chicken with an extremely dangerous potential outcome at the end,” Hopewell said.

In the old days, “there was always a sense that common sense would prevail — that there would be, at the end of the day, an interest in sound economic management,” she said.

“That level of economic rationality just doesn’t seem to be there right now in policymaking. There seems to be a new level of confrontation and recklessness that we really haven’t seen before.”

Rep. Dan Kildee, a Democrat from Michigan, told MSNBC over the weekend that he doesn’t believe the Freedom Caucus members fully grasp the consequences of what they’re trying to do.

“This is going to hurt them, it’s going to hurt the country more, and that’s the real cynical aspect of this,” Kildee said, noting that many of the so-called “ultra-MAGA” Republicans are in safe seats and needn’t fear political consequences.

And there’s not much Canada or anyone else outside the U.S. Congress can do to prepare, Hopewell said.

“Realistically, there’s very little that Canada or any other country could do,” she said.

“At the end of the day, this is a U.S. domestic policy issue. And other countries like Canada have relatively little influence over this type of decision making.”