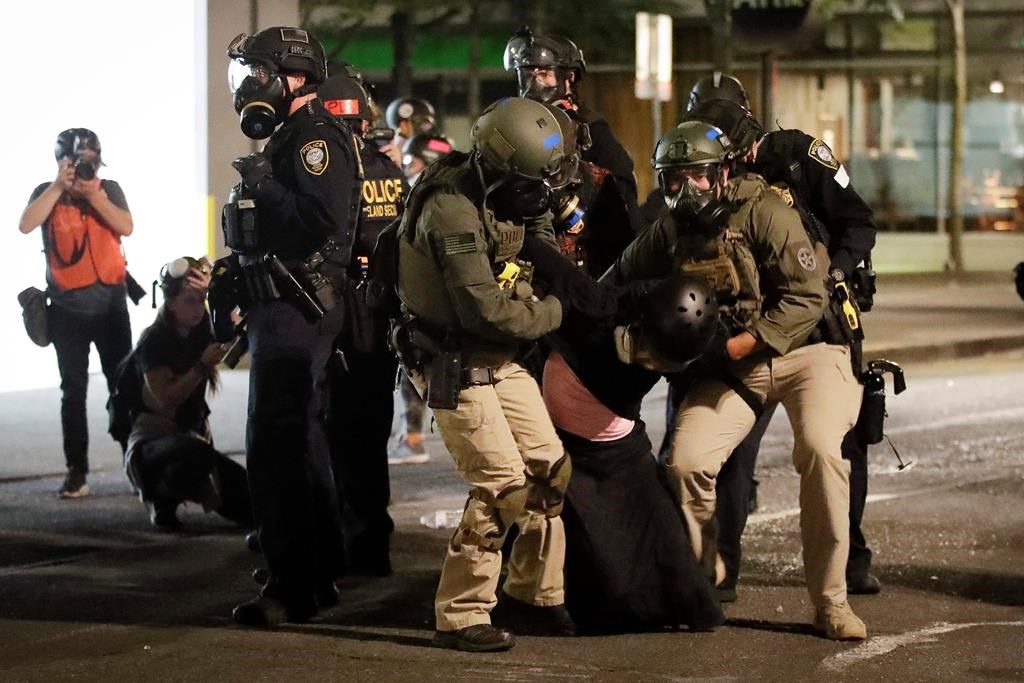 PORTLAND, Ore. â€” Hundreds of militarized federal agents who were deployed to Portland, Oregon, last summer to quell racial justice protests didn't have the proper training or equipment to deal with riots and there was no plan for operating without the help of local police, who were eventually ordered to stand down by the city, a federal investigative report has found.

Between June and August last year, 755 agents from within various agencies under the U.S. Department of Homeland Security were engaged in crowd control in Portland, which saw more than 100 consecutive days of often-violent protest after George Floyd was murdered in Minneapolis, according to a report prepared by the department’s Inspector General.

The recorded images of Floyd, a Black man, struggling to breathe as a white police officer pressed a knee on his neck for about nine minutes galvanized protests against police brutality and racial injustice in cities nationwide. The protests in Portland, which grew to focus on a federal courthouse in the central city, were particularly intense and drew the attention of former President Donald Trump, who repeatedly used the unrest as a law-and-order talking point in his divisive reelection campaign.

At a hearing before the House Homeland Security Committee on Wednesday, DHS Inspector General Joseph Cuffari said the report out this week found the agency "did not properly exercise its authority" in Portland last summer.

"DHS was unprepared to effectively execute cross-component activities in Portland," he said. "Specifically, not all officers had completed required training, had the necessary equipment, or used consistent uniforms, devices, and operational tactics."

The deployment, which began June 4, had cost $12.3 million by August 31 while damage to Portland’s federal courthouse was estimated at roughly $1.6 million, the report found. The agents deployed to Portland were from an alphabet soup of agencies, including the Federal Protective Service, U.S. Customs and Border Protection, U.S. Immigration and Customs Enforcement and the U.S. Secret Service.

The investigation surveyed the training provided to the 222 federal agents deployed to Portland as of Aug. 7 and determined that 36 did not complete training on criminal violations on federal property, which subjected DHS to increased liability. Fourteen of the 36 who lacked adequate training deployed less-lethal devices and munitions, the report found.

The department also did not designate federal agents with authority by name, as previously recommended, and not all agents who were sent to Portland had taken recertification courses in the use of less-lethal munitions they used, including pepper ball guns and various types of concussive grenades and smoke bombs.

"Deploying officers who are not properly trained increases the risk of officers acting outside of their authority. Officers who used force in Portland without evidence of … cross-designation training presented an even greater risk of liability to DHS," the Inspector General wrote.

The agents also did not always have the right protective equipment for policing a hostile crowd with people who often threw rocks, fireworks and Molotov cocktails at them and aimed lasers at their eyes during violent and chaotic protests, the report found.

Between June 13 and July 30, 689 of the agents were injured. Injuries included blurred vision and headaches from the lasers, temporary hearing loss and headaches from fireworks and mortars and wounds from projectiles that included rocks, filled bottles and small steel balls.

Radio communication was also a weak spot and the Federal Protective Service ordered 100 additional radios in the midst of the protests to try to address communication issues among the various agencies.

There was also no plan for operating without the help of local law enforcement to control the crowds, the report found.

The Portland Police Bureau initially worked with federal agents, but on July 22, the City Council voted to prevent local police from co-operating with federal agents. Oregon State Police began helping with the protests outside the federal courthouse on July 30, but state troopers pulled back from those duties in mid-August.