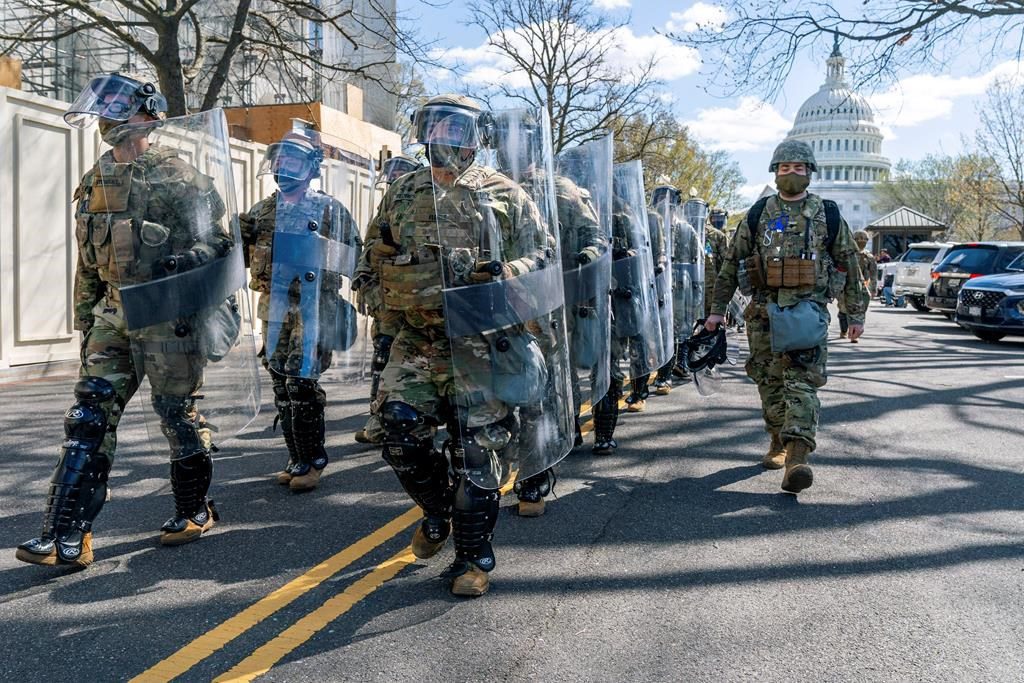 WASHINGTON â€” Three months after more than 25,000 National Guard troops poured into the nation’s capital to secure President Joe Biden’s inauguration, Defence Department and Guard officials are losing patience and are denying some of the city’s recurring requests for troops to protect D.C.

According to defence officials, the Army on Monday approved only about a quarter of the Guard troops requested by city officials to provide security in case of unrest after the upcoming verdict in the trial of former Minneapolis Police Officer Derek Chauvin. The D.C. National Guard confirmed that acting Army Secretary John Whitley has approved the deployment of 250 troops, but officials said the city’s initial request was for as many as 1,000.

Whitley’s decision came after days of debate and discussion over the city’s April 8 request that sought six teams to monitor Metro stops, Guard members to staff 30 traffic checkpoints, and a quick reaction force "of at least 300 guardsmen to be staged at the D.C. Armory with the ability to respond within thirty (30) minutes to a request for assistance."

The request, signed by Christopher Rodriguez, director of the city’s Homeland Security and Emergency Management Agency, was sent to the D.C. Guard’s commander, Maj. Gen. William Walker. The troops would be unarmed, and he asked that they be ready to start Monday.

The request, however, has been met with frustration from Defence and Guard officials who believe the city is relying too heavily on National Guard troops and should instead be seeking support from federal law enforcement agencies in the region. And tension is flaring as the city braces once again for potential demonstrations and unrest.

Federal authorities were warily watching as lawyers finished closing arguments Monday in the Chauvin trial in Minneapolis, and were preparing for the possibility of unrest if the jury does not reach a guilty verdict. Chauvin is facing murder and manslaughter charges in the death of George Floyd. Prosecutors argued that he squeezed the life out of Floyd by pinning his knee against Floyd's neck last May.

In the wake of the deadly riot at the U.S. Capitol on Jan. 6, states around the nation sent about 26,000 Guard troops to D.C. to help secure Biden’s inauguration.

But as weeks went by, divisions over the treatment of some Guard members â€” including complaints about food, resting areas and overcrowding amid COVID-19 fears â€” began to fester, and state leaders started pulling their troops home or openly opposing additional extensions.

In early March, concerns about the ongoing threat of violence at the Capitol prompted the city to ask Guard troops to stay another two months. But governors and Guard officials expressed reluctance or flatly refused to commit their troops to more time in D.C.

After several days of calls and meetings, the Pentagon wrangled commitments from some states for a total of 2,300 troops. But officials warned that another extension would be unlikely.

Over the past week, as the city made its latest request, those objections spiked again.

Defence officials said the long-term commitment has created funding issues and made it harder for Guard units to meet other commitments. In addition, Guard members must take time off their regular jobs to perform their military missions, and officials said employers are becoming weary of the lengthy time off. The officials spoke on condition of anonymity to discuss internal deliberations.

Michael McGuire, chairman of the National Guard Association of the United States, said in an interview after the March request that state Guard leaders were tired of the ongoing "pickup game" of using Guard troops to supplement law enforcement in D.C.

"There's been a quite a pivot in where people are at with this idea of having an expeditionary military police force in the District of Columbia," he said.

McGuire, who recently retired as the adjutant general of the Arizona National Guard, said states have not yet been reimbursed for the salary costs, and their Guard units are under growing strains to meet local missions. Thousands of Guard members are being used for COVID-19 vaccinations, and others are deployed overseas or providing assistance after fires, tornadoes and other state crises.

There also continues to be unease over the complicated and unusual Guard leadership situation in D.C. Because the district has no governor, responsibility for overseeing the D.C. Guard is delegated to the Army secretary.

In March, Gen. Dan Hokanson, chief of the National Guard Bureau, also expressed concerns about the ongoing D.C. deployment requests. In a memo he said that "the continued indefinite nature of this requirement may also impede our ability to man future missions as both adjutants general and guardsmen alike may be skeptical about committing to similar endeavours.”

It would be more preferable, he said, if D.C. pursued other "law enforcement" options.

The Metropolitan Police Department has been preparing for the possibility of unrest in the nation's capital after the Chauvin verdict comes down. As part of the preparations, the entire police force was being activated starting Monday, with officers working 12-hour shifts, a law enforcement official told The Associated Press. The department has also cancelled vacation days and requests for time off, the official said. The official could not discuss the internal procedures publicly and spoke to the AP on condition of anonymity.

The Justice Department has not said whether other federal law enforcement officials would be mobilized in Washington, as they were after the unrest in May and June.