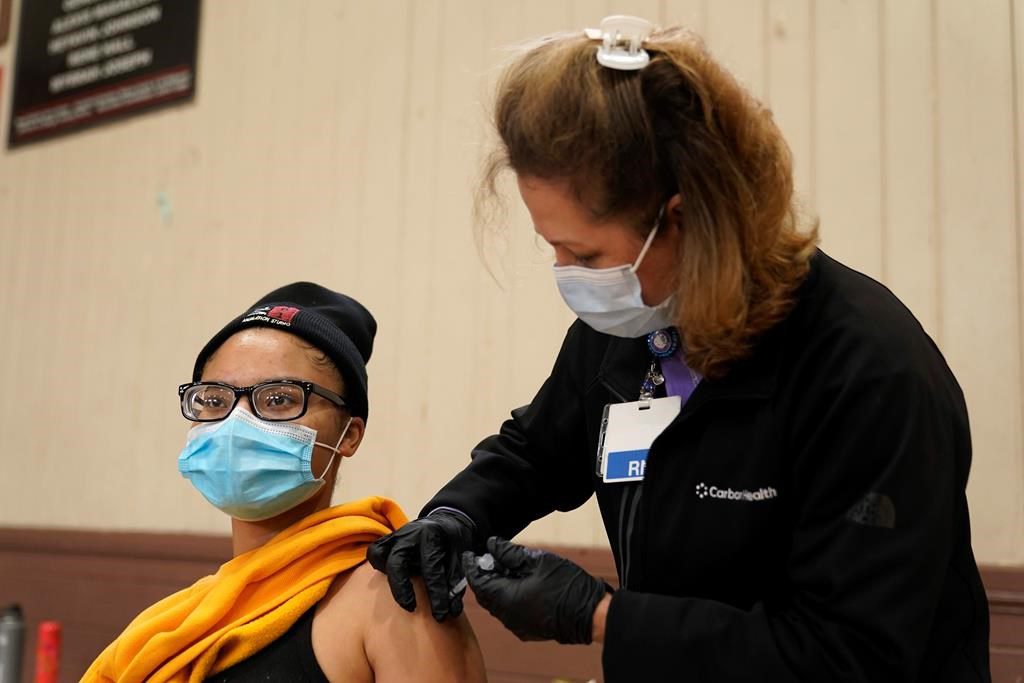 SAVANNAH, Georgia â€” With coronavirus shots now in the arms of nearly half of American adults, the parts of the U.S. that are excelling and those that are struggling with vaccinations are starting to look like the nation's political map: deeply divided between red and blue states.

Out in front is New Hampshire, where 65% of the population age 18 and older has received at least one dose of the vaccine, according to the Centers for Disease Control and Prevention. Following close behind are New Mexico, Connecticut, Maine and Massachusetts at 55% or greater. All have a history of voting Democratic and supported President Joe Biden in the 2020 election.

Meanwhile, at the bottom are five states where fewer than 40% have rolled up their sleeves for a shot. Four of them â€” Mississippi, Alabama, Louisiana and Tennessee â€” lean Republican and voted for Donald Trump last fall. The fifth is Georgia, which has a Republican governor and supported GOP presidential candidates for nearly three decades before narrowly backing Biden.

The emerging pattern: Americans in blue states that lean Democratic appear to be getting vaccinated at more robust rates, while those in red Republican states seem to be more hesitant.

"We can draw a conclusion that red states and voters that voted for Trump are going to be more difficult to vaccinate because we have real good survey data to support that,” said Dr. Howard Forman, a professor of public health and management at the Yale School of Medicine.

A poll by The Associated Press-NORC Center for Public Affairs Research in late March found that 36% of Republicans said they will probably or definitely not get vaccinated, compared with 12% of Democrats. Similarly, a third of rural Americans said they were leaning against getting shots, while fewer than a fourth of people living in cities and suburbs shared that hesitancy.

Forman cautioned that in most U.S. states, which receive vaccine shipments based on population, demand for the shot still exceeds supply. So it's hard to know how many people are resisting until everyone wanting the shots gets them. But if states soon start seeing significant numbers of unfilled appointments with many people still unvaccinated, he said consequences could be serious.

"We could see substantial outbreaks for a long time," Forman said. "It will determine whether we go back to normal in some cases."

Past AP-NORC polls have shown more Republicans than Democrats say the government has exaggerated the threat posed by the virus. Republicans have also been more opposed to restrictions and mask-wearing.

The CDC reports that nearly 121 million American adults â€” or 47% of the U.S. adult population â€” have received at least one coronavirus shot. California, the nation’s largest blue state, is slightly ahead of that pace, at 50%. The biggest red state, Texas, lags at less than 44%.

How swiftly states are vaccinating doesn’t always correlate with how they vote.

Deeply red South Dakota ranks among the most successful states, with 54% of its population getting injections. Among blue states, Nevada lags furthest behind the U.S. at less than 44%, followed by Oregon and Michigan at 45% each.

New Hampshire, which leads the nation in adult vaccinations, has a Republican governor and a GOP-controlled Legislature. However, Democrats hold all of its seats in Congress and the state has consistently Democratic in every presidential election since 2008.

West Virginia, where Trump carried 66% of the vote last year, became an early success story in the vaccine rollout as the first U.S. state to cover all nursing homes. But while Republican Gov. Jim Justice has remained a vaccine cheerleader, West Virginia now lags the U.S. overall with less than 42% of its population receiving at least one dose.

Among those who say they won’t get vaccinated is 58-year-old Martha Brown. Sitting outside her apartment complex in Charleston, West Virginia, Brown said she’s afraid of having a bad reaction after a flu shot last year left her with cold symptoms.

Experts said it’s too soon to tell whether pausing shots of the single-dose Johnson & Johnson vaccine will increase reluctance to get vaccinated. Government scientists are investigating reports of unusual blood clots in six women who received the vaccine.

If the issue gets resolved quickly and it’s deemed safe to resume Johnson & Johnson shots, there should be little impact on public confidence, said Claire Hannan, executive director of the Association of Immunization Managers. She hopes the response itself assures people "the system is working."

"It's really important to understand that's how closely we monitor everyone getting the vaccine" for potential problems, Hannan said. "We have systems in place to connect the dots.”

In a suburb outside Chicago, Jennifer Rockwood was getting ready to get her Johnson & Johnson shot Tuesday morning when she heard about the recommended pause. She cancelled her appointment after waiting months to get the vaccine.

"Did it give me hesitancy? Yes it did," said Rockwood, 49. "But I was immediately back at my kitchen counter flipping the laptop open again and seeing what I could do to schedule another one."

She booked an appointment to get the Pfizer vaccine Wednesday.

Trump has publicly urged Americans to get vaccinated but also received his own injections secretly, disclosing them only after he left office. As president, he spent much of the pandemic minimizing the dangers of the virus, even after being hospitalized with COVID-19.

Some Republican governors have likewise kept their own vaccinations quiet.

In Florida, where about 44% of the population has gotten at least one shot, it wasn’t disclosed that GOP Gov. Ron DeSantis got the single-dose Johnson& Johnson vaccine until a reporter asked the governor’s spokeswoman days later. Many other U.S. governors have gotten their shots on camera or held news conferences around them in an effort to assure people the vaccines are safe.

The Democratic governor of Kentucky, a Trump-voting state, is trying to persuade more people to get jabbed by promising to lift pandemic restrictions when vaccination rates improve. About 1.6 million people in Kentucky have gotten at least one dose, a rate equal to the U.S. overall.

“Every single individual's choices can get us closer to that normalcy we've been looking for," Beshear said.