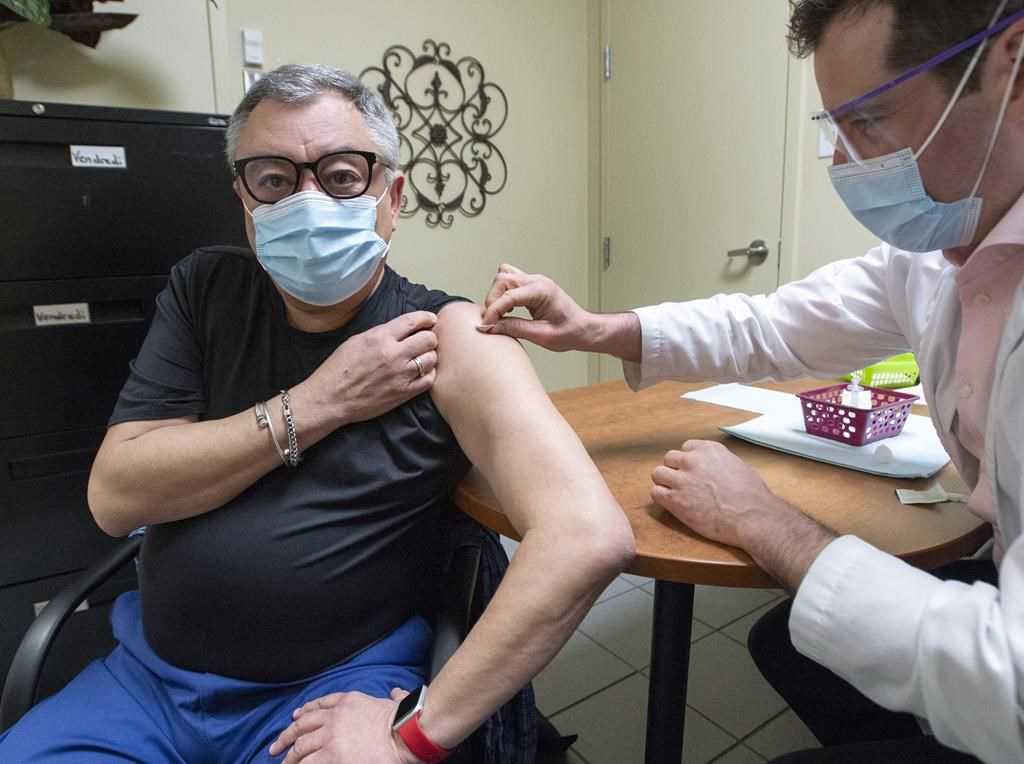 MONTREAL â€” Quebec’s director of public health says the province will be lowering the age of eligibility for the Oxford-AstraZeneca COVID-19 vaccine, following similar announcements by Ontario, Alberta and Manitoba.

Dr. Horacio Arruda told reporters Monday a recommendation from the province’s immunization committee is expected later in the day and could be put into effect this week.

“From what we suspect, there’s going to be a lowering of age like other provinces, but is it going to be 50, 45, 40? I cannot tell you before I receive the advice,” Arruda said.

The AstraZeneca vaccine is currently available to Quebecers between the ages of 55 and 79 at walk-in clinics and by appointment. Quebec suspended use of that vaccine for those younger than 55 over concerns about rare blood clots in a small number of recipients, but Health Canada has licensed the AstraZeneca shot for use in people over the age of 18.

Ontario, Alberta and Manitoba have announced they are expanding access to those 40 and older.

Quebec reported 1,092 new COVID-19 cases Monday and 15 more deaths attributed to the novel coronavirus, including two in the past 24 hours. The province hasn’t reported fewer than 1,100 cases since late March.

The significant drop in new infections is welcome news, Arruda said, but added it means public health measures must be maintained more than ever.

"The situation in Quebec, honestly, is not comparable to what is happening in the rest of Canada, we're really heading toward a drop or a plateau," Arruda said after receiving a first dose of the Moderna vaccine at a pharmacy in St-Eustache, Que., northwest of Montreal.

"But we must never, ever cry victory because things can change from day to day."

The Health Department reported 686 hospitalizations, a rise of three, and 183 people in intensive care, a rise of eight.

Meanwhile, new restrictions between Ontario and Quebec went into effect Monday, limiting travel between the provinces in order to reduce the spread of virus variants of concern. People from Ontario entering Quebec for non-essential reasons will need to self-isolate for 14 days.

The new measures snarled traffic between Gatineau and the national capital as police set up checkpoints at all crossings into Ottawa. Const. Martin Dompierre said Ottawa police officers were deployed to five bridges and two ferries linking Quebec and Ontario.

“We realized by 6 a.m. we were causing quite a bit of backlog and it was becoming a security issue, so we decided to flag people in and we were only stopping or intercepting people stopped for red lights,” Dompierre said.

The first three days will be an educational exercise and authorities will begin issuing fines going forward, Dompierre said.

In Quebec, a provincial police spokesman said officers will not be setting up checkpoints. Instead, Sgt. Marc Tessier said police will conduct “random and sporadic” checks.

“If people fall into conditions where they’re able to cross â€¦ it’s not a problem, but if they don’t have a legitimate reason, they’ll be invited to turn around and go back to Ontario,” he said in an interview.

Quebec says it administered 40,433 COVID-19 vaccine doses Sunday; nearly 2.4 million Quebecers â€” about 28 per cent of the population â€” have received at least one dose.

â€” with files from Paul Chiasson