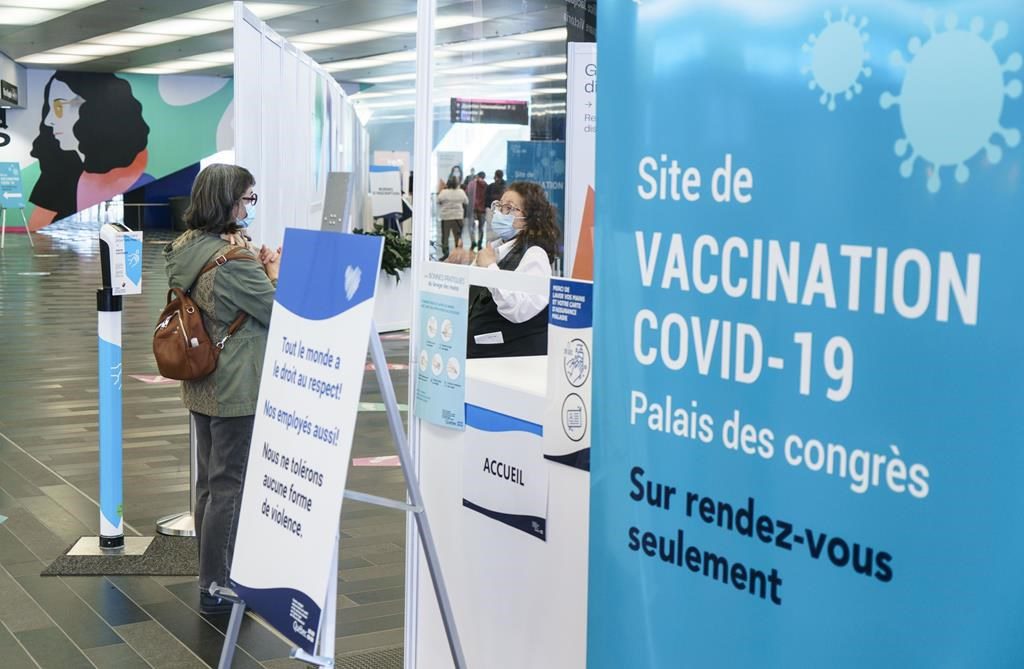 MONTREAL â€” A Quebec opposition party is calling on workers to be granted a four-hour paid break to be able to get vaccinated against COVID-19.

Quebec solidaire said it will present the proposal this week at the legislature, comparing it to rules ensuring people have time to vote.

"During elections, employers already have the obligation to free their employees to do their civic duty," Gabriel Nadeau-Dubois, co-spokesperson of the left-leaning Quebec solidaire, said in an interview Monday. "The same logic should apply during the vaccination campaign."

The opposition party said public sector workers received an email last week inviting them to get vaccinated by taking a sick day or using their personal time.

Nadeau-Dubois said access to vaccination should be equal for everyone, and he believes offering a paid break is a first step in that direction.

"Whether you are rich or poor, working for a multinational company, a small convenience store or a community organization, no matter our economic status, we should all have the same access to the vaccine," he said.

The number of COVID-19 patients in Quebec hospitals jumped by 22 on Monday as health authorities reported 1,599 new infections and two more deaths attributed to the novel coronavirus. Hospitalizations have risen by 127 patients over the past week.

Provincial health authorities said 52,705 doses of COVID-19 vaccine were administered on Sunday, for a total of 1,944,877; nearly 23 per cent of Quebec’s population has received at least one dose.

Montreal reported the highest number of new cases on Monday, with 358. The Quebec City area continued to report a high number of new infections, with 282, but that was down significantly from last week’s high of 449.

The Outaouais region, in western Quebec, reported 290 new cases, while the Chaudiere-Appalaches region, south of the provincial capital, reported 173.

Regional health authorities in Quebec City said Monday that the number of cases tied to a superspreader event at a local gym had risen to 222. The cases at the Mega Fitness Gym are linked to 356 secondary infections and 49 outbreaks.

Meanwhile, the province expanded its vaccination program Monday to include people in the Montreal area living with chronic illnesses and some underlying conditions that put them at risk of COVID-19.

Eligible people include those who are hospitalized for a condition such as heart, kidney or lung disease, high blood pressure, diabetes and some forms of immunosuppression. People receiving outpatient treatment for dialysis, organ donor recipients and many cancer patients can also receive one of the vaccines, which are mostly being administered in hospitals.

The Health Department on Monday reported that 230,490 doses of Pfizer-BioNTech and 176,400 Moderna doses are expected this week. Quebec continues to offer the Oxford-AstraZeneca vaccine, with or without an appointment, at provincial vaccination sites and at pharmacies.

Health Minister Christian Dube said on Twitter the latest delivery will allow long-term care residents who received a first dose of vaccine 16 weeks ago to begin receiving their boosters.

Last Friday, the government began vaccinating essential workers including teachers, daycare workers, police and temporary foreign workers. The government has said it plans to offer at least one dose of vaccine by June 24 to every adult in the province who wants one.