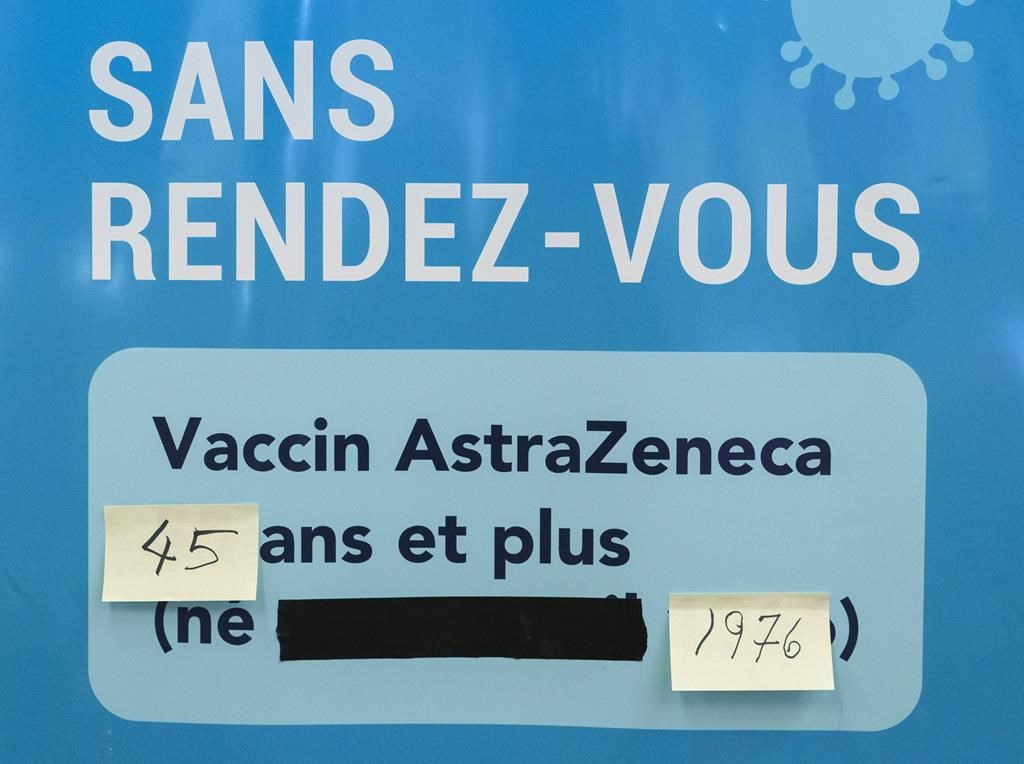 Dube said it will be up to people with chronic illnesses, a category that includes diabetes, obesity and respiratory problems, to decide whether they qualify.

Dube said he’s counting on the good faith of Quebecers to identify themselves if they qualify and not to take advantage of the self-identification system if they don’t, adding that anyone who thinks they fit into one of the categories should not hesitate to get vaccinated.

Dube said he’s confident the supply of vaccine will be sufficient to vaccinate the additional groups.

Earlier Thursday, Quebec Premier Francois Legault said he and a number of other premiers were writing to Prime Minister Justin Trudeau, urging him to tighten restrictions on land and air travel to prevent the entry of more novel coronavirus variants.

Legault told reporters in Quebec City he and his counterparts are concerned about flights coming from regions where more transmissible variants are rampant.

“We would like to reinforce the measures regarding international flights (from) India and Brazil,” Legault said.

“Second, for people coming from the United States on the ground, we would like to see more measures, including quarantine, to make sure we prevent the increase in the number of people infected in Canada.”

Legault said the premiers of Ontario, Alberta and British Columbia are among those behind the letter, adding that they agree more should be done to reduce interprovincial travel.

The province reported 1,248 new COVID-19 cases and seven deaths attributed to the novel coronavirus Thursday, including two in the past 24 hours. Health officials said hospitalizations dropped by five, to 711, and 174 people were in intensive care, a drop of four. Quebec has 12,124 active reported cases.

On Wednesday, Quebecers 45 and older officially became eligible to receive the AstraZeneca vaccine. Dube said 103,000 people have scheduled an appointment to get an AstraZeneca dose in the coming week.

He said 11,000 people have been trained to administer COVID-19 vaccines, and that the province is ready to receive more doses.

This report by The Canadian Press was first published on April 22, 2021.