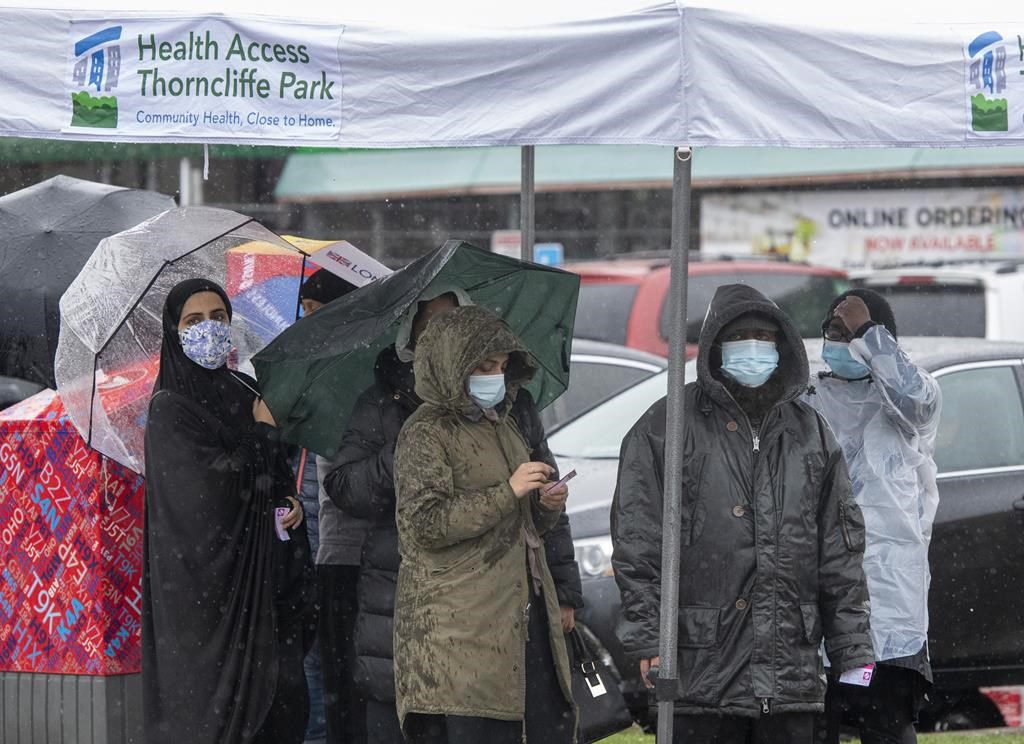 Ontario announced Monday it was closing its schools, and Toronto-area hospitals cleared pediatric beds to make room for COVID-19 patients as officials in other provinces defended the need for public-health restrictions.

Premier Doug Ford told a news conference that schools in the province would move to online learning next week, saying there is too much community spread of COVID-19 to risk a return to the classroom after spring break.

“The problem is not in our schools, it’s in our community,” he said. “And bringing our kids back to a congregate setting in school after a week off in the community is a risk that I won't take.”

Both Quebec and Ontario reported strong rises in COVID-19 hospitalizations on Monday, prompting concerns about the capacity of those province’s health-care systems amid a surge of more contagious variants of COVID-19.

The problem is most acute in Ontario, which reported a 133-person increase in hospitalizations on Monday. It has 1,646 COVID-19 patients in hospital, including 619 in intensive care.

In response to the pressure, the Ontario Hospital Association said nearly all Greater Toronto Area hospitals would close their pediatric units to help accommodate a surge in COVID-19 cases. Children at those hospitals will be sent to Toronto’s Hospital for Sick Children for care, according to association president Anthony Dale.

The news came as Toronto’s chief medical officer of health said the city could see 2,500 daily new COVID-19 cases by the end of April, even with a stay-at-home order in effect.

Quebec reported a 22-person jump in the number of hospitalizations on Monday, after an increase of 25 the day before. The province has 630 COVID-19 patients in hospital, with 142 requiring intensive care.

Saskatchewan saw a record high of 47 people in the ICU last week, including 31 in Regina, a hot spot for a more infectious strain of the virus. The total number was at 41 on Monday, but that’s still higher than the 27 receiving intensive care a month ago.

Alberta Premier Jason Kenney pointed to the situation in Ontario as he defended his government’s recent decision to impose stricter measures, including closing restaurant dining.

"We should take a real look at what's happening in the rest of the world, like Ontario right now, where they are dangerously close to their maximum capacity in intensive care â€¦. We don't ever want to be in that situation in Alberta,” said Kenney, who acknowledged some people were upset with the decision.

Some critical care nursing staff have also been redeployed to hospitals with the Fraser Health Authority and surgeries there may be adjusted, he said.

“This will not be like last year where we cancelled en masse scheduled surgeries, but will be targeted and for as short a period as possible.”

Quebec, meanwhile, was dealing with the fallout over its own decision to impose stricter rules after hundreds of people gathered Sunday in Montreal’s historic district to protest the provincial government’s decision to advance the nighttime curfew to 8 p.m.

A police spokesman said Monday that seven arrests were made after some protesters led a destructive trail through Old Montreal, breaking store windows and lighting garbage on fire.

Deputy premier Genevieve Guilbault said violent actions are unacceptable. “We have the right to express our disagreements, but we must do so with the greatest respect for the health rules in force,” she wrote on Twitter.

Canada’s chief public health officer said the number of hospitalizations has been rising across the country, putting pressure on health-care resources.

Dr. Theresa Tam said in a statement that the average number of people being treated in Canadian hospitals between April 2 and April 8 rose seven per cent compared to the week before, while ICU admissions rose by 23 per cent.

She said the people being hospitalized and receiving intensive care are increasingly under the age of 60 and infected with the more transmissible variants.

“This is a reminder that serious illness can occur at any age, and evidence indicates that variants of concern can be associated with more severe illness and increased risk of death,” she wrote.

Tam said there are more than 33,000 confirmed cases involving contagious variants in Canada. Most still involve the B.1.1.7 variant first detected in the United Kingdom. But Tam said there has also been a “concerning rise” in the number of cases of the P. 1 variant, first associated with Brazil, which is particularly worrisome because it may reduce the effectiveness of vaccines.

B.C. on Monday began vaccinating all adults in the ski resort town of Whistler, which has been hit hard with at least 197 cases of the P. 1 variant.

Saskatchewan reported 300 new cases of COVID-19 on Monday including 96 in Regina.