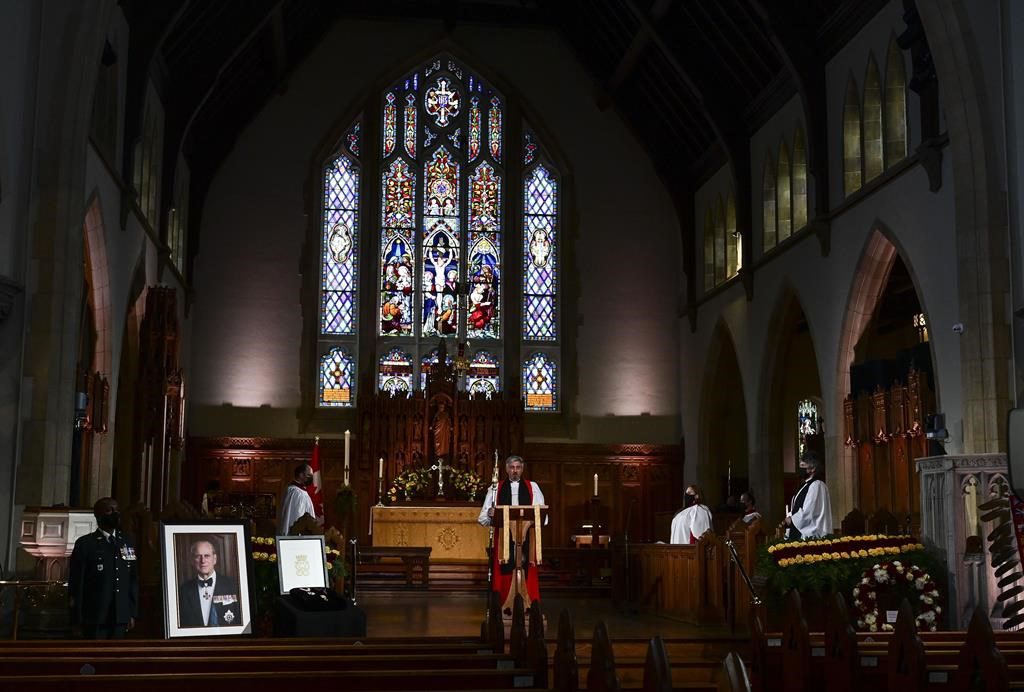 Canada’s commemorative ceremony in honour of the late Prince Philip offered a scaled back pandemic-era tribute to a man remembered for his public service, commitment to youth and enduring support of his wife the Queen.

The service at Christ Church Cathedral in Ottawa, which included virtual tributes and performances, followed the Duke of Edinburgh’s official funeral inside St. George's Chapel at Windsor Castle.

Prime Minister Justin Trudeau, who earlier on Saturday announced a $200,000 donation to the Duke of Edinburgh's International Award, called the late royal “a man of great service.”

“He devoted his life to duty and to the people of the Commonwealth,”  he said during the virtual service.

“In the days following his passing, we’ve heard from countless people across Canada and around the world,” Trudeau said. “They’ve shared memories, stories and spoken about his impact on their lives and their communities.”

Prince Philip was “a man who believed in people and in particular, in young people,” he added. “He challenged them to do more to believe in themselves and to push for a better and brighter tomorrow.”

In 2010, before his installation as governor general, Johnston said he and his wife Sharon were invited to Balmoral Castle in Scotland.

The Queen invited Sharon to spend a few hours at the stables tending to the horses, but she had only packed dress shoes, he said.

“Prince Philip twigged to the predicament,” Johnston said. “Turning his chair back, he peered under the table, glanced at Sharon’s feet, turned to the queen and said, ‘I think she’s your size.’

“Her Majesty disappeared from the breakfast table, returning moments later with a pair of well-worn brogues, problem solved,” he said. “In this moment, the Queen’s consort had overcome one possible obstacle to the Queen’s plans.”

In accordance with pandemic-related restrictions, no guests were invited to attend the church service.

Instead, Canadians were asked to watch the broadcast on television or online and not congregate outside.

A gun salute took place as part of the national ceremony, which was followed by a recital by the Dominion Carillonneur at the Peace Tower on Parliament Hill.

Earlier on Saturday, the official funeral took place at Windsor Castle amid public health restrictions meant to protect against the COVID-19 pandemic.

The Queen sat alone in the quire of St. George's Chapel as she mourned her husband, the longest serving royal consort in British history.

The service paid tribute to both Philip’s service in the British Royal Navy and his unwavering support for his wife.

The ceremony was limited to 30 mourners inside the chapel, including the widowed monarch, her four children and her grandchildren. Everyone wore face masks and maintained physical distance or sat in family bubbles.

“Certainly because of COVID there was perhaps a certain surreal quality about it but it was also very beautiful,” said John Yogis, secretary of the Halifax branch of the Monarchist League.

“The most touching aspect was to think about Her Majesty by herself.”

Yogis said seeing the Queen seated alone, a solitary figure after nearly three quarters of a century with Philip by her side, gave him “goosebumps and sadness at the same time. It really is an era coming to an end.”

Yogis, also director of the Commonwealth Judicial Education Institute, called the Duke of Edinburgh's International Award one of the Prince’s “most significant contributions to the Commonwealth.”

The program exposes youth to the “outdoors, the wilderness and the notion of service and citizenry,” he said.

The donation to the Canadian branch of the Duke of Edinburgh's International Award honours Prince Philip’s commitment to the success of future generations, Trudeau said in a statement.

Prince Philip served in the Royal Navy for more than 12 years and maintained close ties to the armed forces throughout his life.

Service personnel had a significant role in Saturday’s funeral tributes despite the attendance limit.

Royal Marine Buglers sounded the Navy's battle alert in honour of the Prince’s military service as his coffin was lowered into the Royal Vault at St. George's Chapel inside Windsor Castle.

â€” With files from The Associated Press.