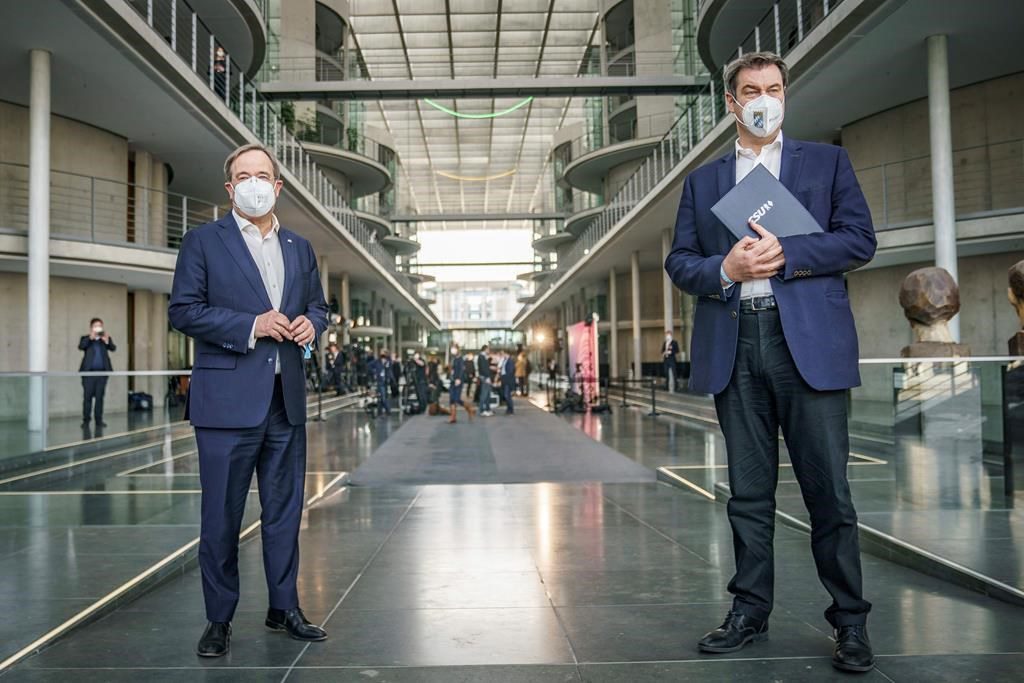 BERLIN â€” Pressure mounted Saturday on the two contenders hoping to lead German Chancellor Angela Merkel’s centre-right bloc into September’s national election to end their power struggle and agree which of them will run to succeed her.

Armin Laschet, the leader of Merkel’s Christian Democratic Union, and Markus Soeder, the head of its smaller Bavarian sister party, the Christian Social Union, have both declared their interest in running for chancellor.

Germany's parliamentary election Sept. 26 will determine who succeeds Merkel, who isn't seeking a fifth term after nearly 16 years in power.

Laschet and Soeder are the governors of Germany's two most populous states, North Rhine-Westphalia and Bavaria respectively. Soeder has much better poll ratings, but Laschet is the recently elected leader of the political party that is by far the largest one.

On Monday, Laschet rallied the CDU leadership behind his bid and called for a quick decision. But Soeder said the matter shouldn’t be resolved "only in a small back room," pointing to his superior poll ratings â€” angering many in the CDU.

On Tuesday, the two contenders appeared at a closed-door meeting of the Union bloc’s joint parliamentary group in Berlin that, according to German media reports, laid bare the divisions in the CDU. They held out the prospect of a decision by the end of the week.

There has been little sign of movement since, but mounting calls for a decision amid fears that the power struggle could do significant damage.

Defence Minister Annegret Kramp-Karrenbauer, Laschet’s predecessor as CDU leader, appealed Saturday for Laschet and Soeder to come to an agreement.

"No one can relieve them of this leadership responsibility," she said, according to the dpa news agency.

The centre-left Social Democrats nominated Finance Minister Olaf Scholz as their candidate for chancellor months ago. The environmentalist Greens are to announce Monday which of their co-leaders, Annalena Baerbock and Robert Habeck, will make their first run for the chancellery.