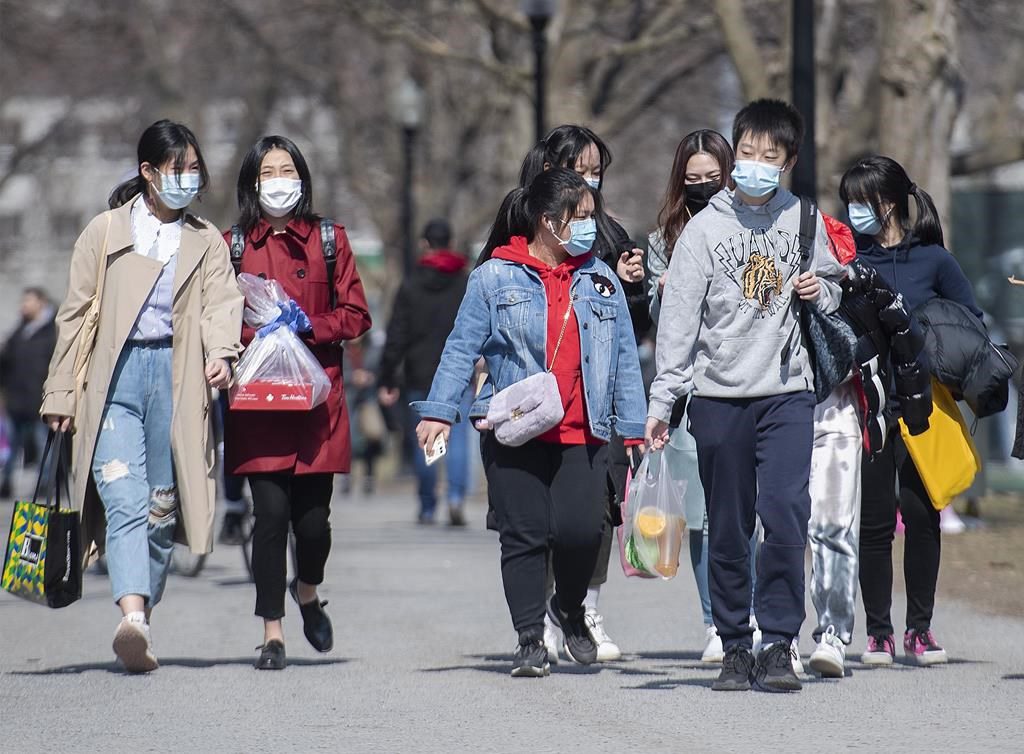 MONTREAL â€” Quebec Premier Francois Legault softened some rules surrounding outdoor mask wearing on Wednesday after criticism from the public and members of the political opposition.

On Tuesday, Legault reminded Quebecers about a new rule stating that any time two or more people from different households gather outside in red or orange pandemic-alert zones, they have to wear masks â€” except if they are sitting down at least two metres apart or doing water sports.

The new rule, he said, even applied to couples walking down the street or to people playing outdoor sports.

A day later, however, Legault appeared to backtrack.

In a message on his Facebook page, he said he had asked that the outdoor mask order apply only in situations when it may be difficult to respect a two-metre distance.

“In a situation where you are sure to always stay more than two metres away, such as tennis or golf, or sitting in a park, it is not necessary to wear the mask,” he said.

Legault said the mask rule would no longer apply to someone walking with a family member who is part of their bubble or to friends or romantic couples spending time outside.

The change came after the province’s health director admitted on Tuesday that the rules could appear “inconsistent” for couples who don’t live together and who are required to wear masks outside but not when they are together indoors.

In his Facebook message, Legault urged Quebecers to use their common sense and take as many precautions as possible given the contagious nature of the COVID-19 variants that are circulating in the province.

“If you have the least doubt, wear a mask.”

Members of the Opposition Liberals and Quebec solidaire blasted the government for not properly explaining the new measure to the public.

Quebec solidaire spokesperson Gabriel Nadeau-Dubois said Wednesday in Quebec City that the outdoor mask rules were hard to follow and they hadn’t been shown to be necessary.

Later in the day, Nadeau-Dubois congratulated Legault for changing his stance, while pointing out that the confusion could have been avoided.

Liberal Leader Dominique Anglade noted that the government had announced the original outdoor mask rule in a press release last week instead of mentioning it during the news conference that had taken place minutes prior.

The government’s public health institute recommended the outdoor mask rule as a precaution, despite a lack of data proving outdoor transmission is a problem.

Public health director Horacio Arruda acknowledged on Tuesday that the province doesn’t have data confirming that transmission is happening outdoors but said experts believe there’s a risk given the contagious nature of new COVID-19 variants.

“Given the very high transmissibility of the variants, given the fact that outside, less than two metres there are still particles â€¦ this recommendation was adopted by our experts, by consensus,” he said.

Nima Machouf, an epidemiologist at Universite de Montreal, says she understands the government's concern over outdoor COVID-19 transmission, but says the initial decision to impose a near-universal outdoor mask rule was wrong since many outdoor activities can be safe.

"It just reduces people's adhesion to the health measures, for one, and right now it's dangerous to alienate the population," Machouf said.

She says the population is already showing signs of alienation following protests and vandalism in Montreal earlier this week in reaction to Legault’s decision to advance the nighttime curfew in Montreal to 8 p.m. Legault imposed the curfew “as a precaution,” he said, despite no significant rise in cases in the region.

Instead of imposing rules that many see as arbitrary, the government should be upfront about how COVID-19 is transmitted â€” including by aerosols, she said.

The government is reluctant to discuss transmission by air, she said, because it would raise questions about the safety of schools and workplaces. Instead, the government has decided to impose strict orders that anger a frustrated public.

"Instead of explaining, they're saying:, ‘At 8 p.m. you have to go home; in the park if you see each other you wear a mask' â€” things that aren't very logical," she said in an interview Wednesday.

In an email sent Wednesday morning, the Health Department said its contact tracing process seeks to identify in what setting an outbreak occurred but not whether it happened indoors or outdoors. Doing a more detailed breakdown is “not a priority at this time,” a spokesperson said.

The mask-wearing rules, the department added, were brought in out of concern that people were forgetting to maintain a two-metre distance during outdoor gatherings, which have become more popular in recent weeks given the warm weather.

â€” With files from Caroline Plante.