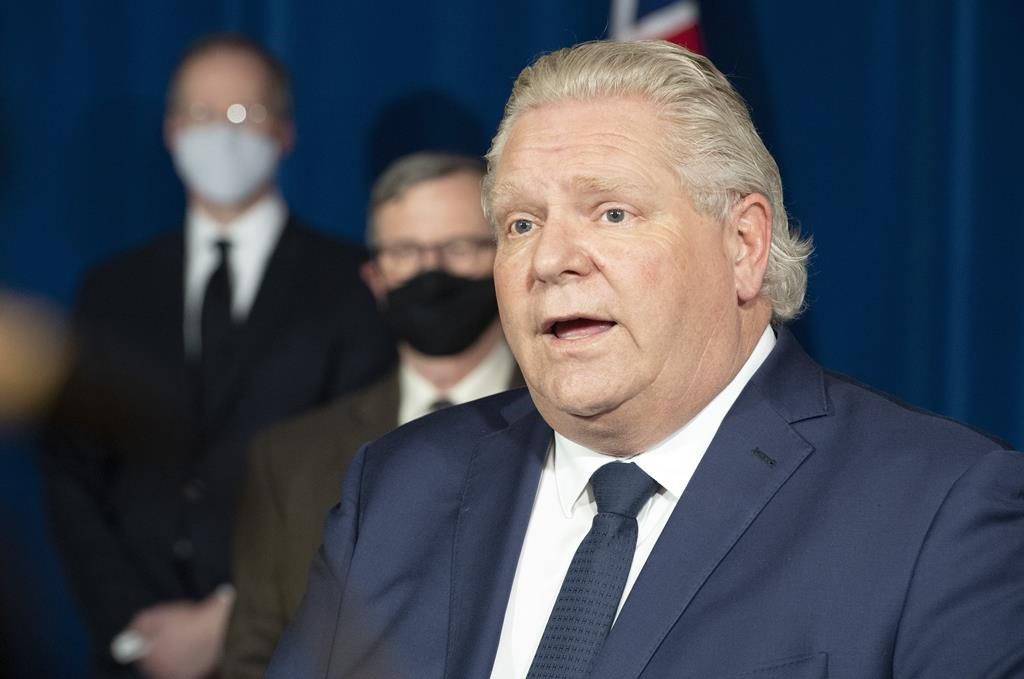 TORONTO â€” Ontario Premier Doug Ford issued an emotional apology on Thursday for introducing COVID-19 restrictions that sparked furious backlash as he confirmed his government would bring in paid sick-leave for workers after months of refusing to do so.

Ford said he was sorry for increasing police enforcement powers and closing playgrounds last Friday measures that were rolled back amid an onslaught of criticism and said his government got it wrong.

“I will always try to do what’s right,” Ford said, choking back tears. “If we get something wrong, we’ll fix it.”

The premier acknowledged his government’s recent moves had angered many but maintained he still had the authority to lead the province. He deflected criticism that the impact of the third wave could have been lessened with stronger policy responses, saying he could have done more with greater vaccine supply.

The government announced last week’s restrictions amid soaring COVID-19 cases and an alarming rise in people in hospital and intensive care. Critics were especially incensed at the government handing police the power to stop people at random to ask why they were out during the province’s stay-at-home order.

Ford said the measures had been brought in too fast in response to dire COVID-19 projections.

“We moved too quick; if I make a mistake, I correct it immediately,” Ford said. “I’m sorry and I apologize to each and everyone of you.”

The premier confirmed that his government was working on a sick-leave program to support workers, although he did not provide a timeline or any further specifics.

Critics slammed Ford for failing to make commitments to immediately implement sick leave and noted he also didn’t move to follow other recommendations from experts, like closing all non-essential workplaces.

NDP Leader Andrea Horwath said Ford’s inaction earlier in the pandemic set people up for the devastating third wave and he failed to make firm promises Thursday to improve the situation.

“How much longer are Ontarians going to have to wait for their premier to do the right thing, base his decisions on public health and science, and save lives and stop the spread of this virus,” Horwath said.

“The people of Ontario need more than an apology," he said. “They need action that follows the science. That’s what’s driving the frustration and anger.”

“It’s time for far more than assurance that he’ll work on something,” said Fred Hahn, president of the Canadian Union of Public Employees Ontario.

The CEO of the Registered Nurses’ Association of Ontario expressed frustration with Ford’s apology, saying he should delegate the entire pandemic file to Health Minister Christine Elliott.

“The time for emotional pleas from the Premier is over,” said Doris Grinspun. “I hope that the Minister of Health will understand better the situation and act quickly.”

Public health experts, opposition politicians, labour groups and local officials have been calling for sick-leave support for much of the pandemic, arguing it would reduce COVID-19 spread in workplaces.

Ford had steadfastly refused to implement such a program, pointing to an existing federal benefit, but his government indicated this week that it would finally change course.

His ministers said a provincial policy would fill “gaps” in the federal benefit, including reducing wait times for funds, expanding eligibility, and providing time off to get vaccinated.

Ontario reported 3,682 new cases of COVID-19 on Thursday and 806 people in intensive care. The province also reported 40 more deaths from the virus.

As hospitals continued to be stretched to capacity, the province issued two new emergency orders Thursday that will help bring more health-care workers to the facilities.

One order allows workers to provide patient care outside their regular scope of practice, consistent with duties assigned by a hospital. The other allows out-of-province health care workers to practice in an Ontario hospital without registering with regulatory colleges in the province.

The government said the orders will allow staff from Ontario health facilities to be redeployed to hospitals and will also pave the way for out-of-province health workers to practice here.

Ontario said it had received tentative offers of health-worker support from Newfoundland and Labrador, Prince Edward Island and Nova Scotia.

Meanwhile, a group of doctors published an open letter asking Ontarians to urge the government to allow more people to work from home, target vaccinations at the hardest-hit areas and increase workplace testing.

“This is a crucial moment for the people of Ontario, for its economy, for its people's health and for our collective futures,” the letter said. “We need your vocal support to keep you and your families and communities safe and out of our hospitals.”

– with files from Shawn Jeffords.