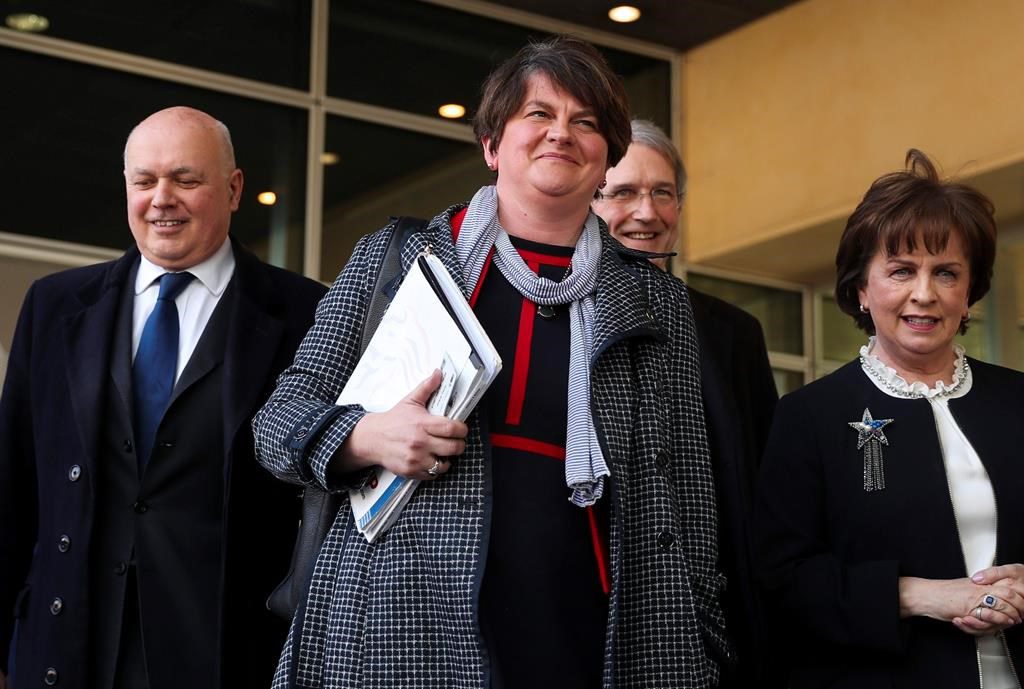 LONDON â€” Northern Ireland’s Democratic Unionist Party is looking for a new leader following First Minister Arlene Foster’s announcement that she will be standing down after nearly 5 1/2 years in the post.

Following weeks of pressure related to her handling of Brexit and her perceived softening on social issues such as abortion and LGBT rights, Foster said she would step down as leader of the party on May 28 and as first minister of Northern Ireland at the end of June.

Her successor, who will be the party’s fourth leader, is set to be chosen in a ballot of the party’s lawmakers in the U.K. Parliament in London as well as those in Northern Ireland’s power-sharing assembly in Belfast.

It’s unclear whether there will be more than one candidate. If there is, it would be the first time in the Democratic Unionist Party’s 50-year history that an election has taken place. It’s also not clear whether the winner will necessarily take up the position of first minister as the leader could be based in London.

Still, who replaces Foster matters â€” for Northern Ireland and for the wider United Kingdom and its relationships with Ireland and the European Union.

That’s because the DUP has played an outsized role in British politics over the past couple of decades after becoming the leading proponent of the union between Northern Ireland and Britain.

The party has provided three of the four first ministers to have run the devolved administration in Northern Ireland since the Good Friday Agreement of 1998 formalized power-sharing arrangements between those who want to remain in the U.K. and those who wish to see Northern Ireland become part of the Republic of Ireland.

For decades, that fissure fueled sectarian violence. The so-called Troubles, which formally ended with the Good Friday Agreement, resulted in around 3,500 deaths.

The DUP also played a prominent role in the Brexit debate. It backed the U.K.’s departure from the EU in the 2016 referendum and has tried to use its votes in the U.K. Parliament in the years since to eke out concessions from successive British Conservative governments.

However, post-Brexit trade rules that took effect at the start of this year imposed customs checks on some goods moving between Northern Ireland and the rest of the U.K., which has angered many within the DUP .

These are some potential contenders to succeed Foster:

Poots, 55, the current agriculture minister in the Northern Ireland assembly, is seen by many as the leading contender to replace Foster, partly because he takes a hardline stance on social issues that many DUP members think echo the party's founder, Dr. Ian Paisley. When he was health minister in the Northern Ireland assembly, Poots in 2011 backed a ban on gay men donating blood, and he is a vociferous opponent of abortion and LGBT people adopting children. Recently, he found himself in an awkward position as his ministerial portfolio requires him to implement the border checks required under the Brexit deal. Earlier this year, Poots had surgery for kidney cancer and returned to work soon after.

Donaldson, 58, has been a lawmaker in the U.K. Parliament since 1997 and leads the DUP’s eight–member grouping there. He says he wanted to enter politics after the Irish Republican Army killed his police officer cousin Samuel Donaldson in 1970. Like Foster, he is considered a pragmatist. Both started out in the Ulster Unionist Party, which the DUP usurped as Northern Ireland’s main voice of unionism. As a result, he may face questions of trust â€” as Foster did â€” from the more traditional wing of the DUP. He was knighted by Queen Elizabeth II in 2016.

Robinson, 36, has been a lawmaker in the U.K. Parliament for the East Belfast constituency since 2015. Given his youth and relatively liberal views, the former lawyer could be the option for those who think it’s time for the party to move on. Others may think it’s too soon.

Wilson, 68, was heard regularly during the Brexit debates. While Northern Ireland ultimately voted to remain in the EU, Wilson aired his pro-Brexit views with passion. As a result, he is a popular figure within the party. His social conservatism, such as his consistent opposition to same-sex marriages, may be an asset, though it’s unclear whether he will run to become DUP leader. He declined to do so in 2015.

The 54-year-old son of the party’s founder, Paisley has appeal within the DUP. However, he is sometimes viewed as somewhat of a maverick. A series of controversies involving the non-declaration of foreign trips with U.K. Parliament authorities have dinted his standing.