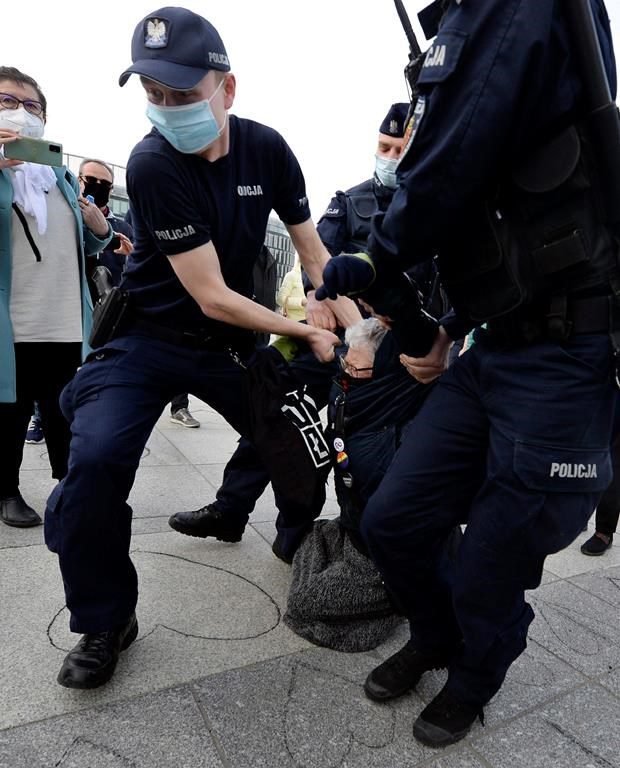 WARSAW, Poland â€” A Polish court on Tuesday acquitted a prominent senior citizen activist of charges she insulted and assaulted a police officer who tried to detain her during an anti-government protest last week.

The activist, Katarzyna Augustynek, has participated in many street demonstrations against the right-wing government, and has had several run-ins with police.

According to a Polish media reports, the judge at the District Court in Warsaw said evidence indicated that Augustynek had been protesting peacefully.

Gazeta Wyborcza daily said on its website the judge stressed that the constitution guarantees the right to protest. The judge also argued that there was no justification for the way police had treated Augustynek, who resisted detention during last week’s protest.

Augustynek, who is in her mid 60s, has supported women's rights, judicial independence and other causes.

Known widely as Babcia Kasia, or Grandma Kasia, she has been repeatedly stopped by police and asked to show identification or detained, under increasingly assertive tactics â€” including large-scale identifications, detentions and the use of tear gas â€” police have deployed against protesters.

On April 11, an Associated Press photographer documented her being dragged to a police van for painting crosses and hearts in honour of COVID-19 victims on the pavement of a downtown square in Warsaw.

The authorities argue that protests held during the pandemic have been in violation of health regulations.

Augustynek, often seen carrying an LGBT rainbow rights bag, gained recognition amid the mass protests triggered when the constitutional court issued a ruling that led to a near-total ban on abortion.

The recent charges stemmed from her participation in a demonstration last Wednesday in support of a judge facing a possible arrest order.

Last fall, Augustynek described to the AP how she had supported the anti-communist Solidarity movement in the 1980s but then abstained from political activities until the governing Law and Justice party won elections in 2015. Since then she has protested regularly.

"I reached a point where I could not stand what was happening in my country," she said.