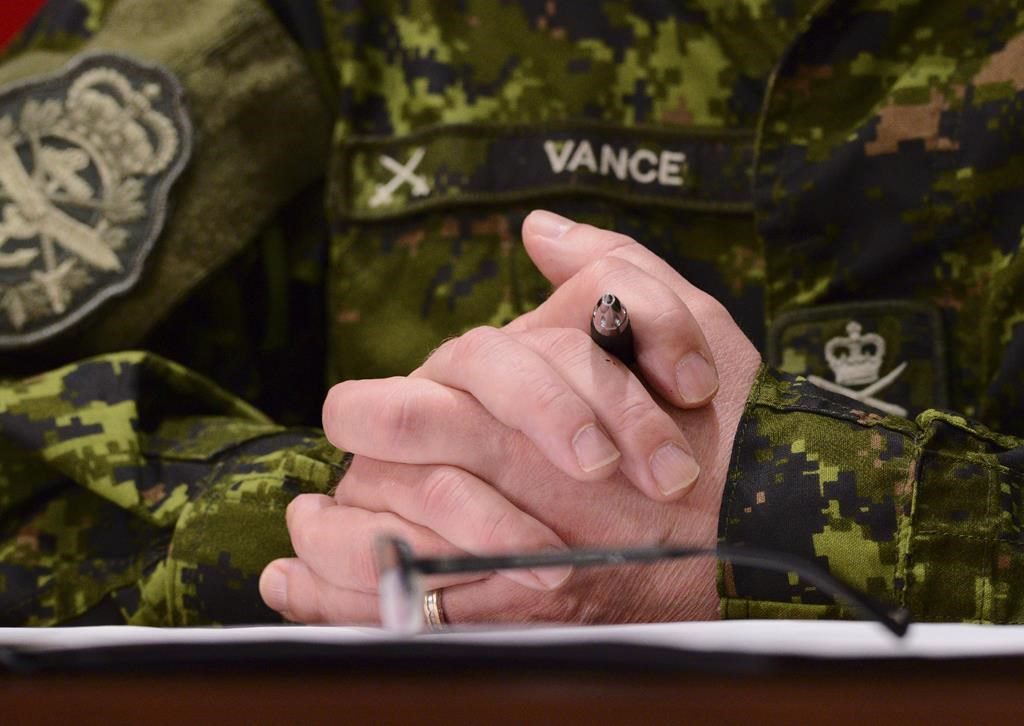 OTTAWA â€” Prime Minister Justin Trudeau vigorously defended his top aide on Tuesday, saying that while his office knew there was a complaint against then-defence chief general Jonathan Vance three years ago, no one knew it was about sexual misconduct.

The comments came in response to fresh questions about what the prime minister and his chief of staff, Katie Telford, knew about the allegation against Vance in March 2018 following testimony last week from one of Trudeau's former advisers.

Responding to a question during one of his regular COVID-19 briefings, Trudeau described his chief of staff as "an extraordinarily strong leader" who has been instrumental in pushing the federal government to become more feminist.

"It’s because of Katie that I have sat down with multiple women leaders within the Armed Forces and elsewhere to have conversations about this over the years to look at what more can and should be done," the prime minister said.

He went on to say that while "my office knew there was a complaint against (now retired) general Vance, nobody knew that it was a 'Me Too' complaint. We did not have information on what was the nature of that complaint of that allegation."

Trudeau later repeated the comments in the House of Commons in response to Conservative questions, adding in French that "there was no one in my office or in (Defence) Minister (Harjit) Sajjan's office who knew the nature of the complaint."

Former Trudeau adviser Elder Marques told a parliamentary committee on Friday that Telford or her assistant contacted him in early March 2018 to speak with Sajjan's top aide about an issue relating to Vance.

That request came shortly after then-military ombudsman Gary Walbourne raised a complaint against Vance of inappropriate sexual behaviour with Sajjan during a closed-door meeting on March 1, 2018.

The testimony from Marques appeared to contradict the sequence of events laid out by Sajjan earlier this month, and raised new questions about what Trudeau knew about the allegation before Global News reported on the allegations in February.

While the nature of the complaint reported by Walbourne has not been confirmed, Global has reported that it involves a lewd email Vance allegedly sent to a service member he significantly outranked in 2012, before he became commander of Canada's military.

Trudeau has denied personally knowing about the allegations until the Global story broke on Feb. 2.

Vance, who stepped down as chief of the defence staff in January and retired from the military in April, has not responded to requests for comment from The Canadian Press, but Global has reported he denies any wrongdoing.

In the House of Commons, Conservative Leader Erin O'Toole pointed to Marques' testimony as well as partially redacted email exchanges on March 2, 2018 referencing "allegations of sexual harassment" to undermine Trudeau’s claim on Tuesday.

The emails dated March 2, 2018, obtained by The Canadian Press, are between Privy Council official Janine Sherman and someone else who appears to be offering advice on how Sherman should approach Walbourne to start investigating the allegation.

Sherman has testified that she exchanged emails on that date with "people in the Prime Minister's Office," though the emails discussing sexual harassment appear to have originated from someone within Sajjan's office.

"He just told the House that his office was not aware that they were of a 'Me Too' nature," O'Toole said as he held a piece of paper in the House of Commons. "The only trouble is his team used the term sexual harassment in their emails about this incident in March 2018.

"Will the prime minister be honest with this house and with the women serving bravely in our Canadian Armed Forces that he was aware and he failed them for three years?"

Conservatives on the defence committee, meanwhile, have latched onto Marques' testimony as evidence that more hearings are needed to find out why the Liberal government didn't do more to investigate the allegation against Vance.

The defence committee is scheduled to meet again on Friday, where the Tories are expected to push for Telford to testify.

Walbourne has testified he told Sajjan the complaint related to "inappropriate sexual behaviour," but Marques was more circumspect in whether he and Telford knew about the nature of the complaint.

"I believe I was told that the issue was an issue of personal misconduct," Marques told the Commons defence committee.

"I have to say, in the context of hearing that, that I think my presumption was certainly that it could be of a sexual nature, but I don’t think I was actually given that information specifically."

Former Privy Council clerk Michael Wernick was also uncertain, though he told the committee that email exchanges between Marques, Sajjan's chief of staff Zita Astravas and a senior civil servant, Janine Sherman, at the time may have referred to sexual misconduct.

Sherman was charged with looking into the allegation against Vance, but has told the committee that she could not conduct an investigation because Walbourne would not provide information about the complaint.

"I think the language was 'potential sexual harassment,'" Wernick said. "There is a back-and-forth of emails between Zita, Janine and Elder. I certainly would say that it was in the realm of sexual misconduct or sexual harassment, but I couldn’t speak to the exact language."

This report by The Canadian Press was first published Apr. 27, 2021.