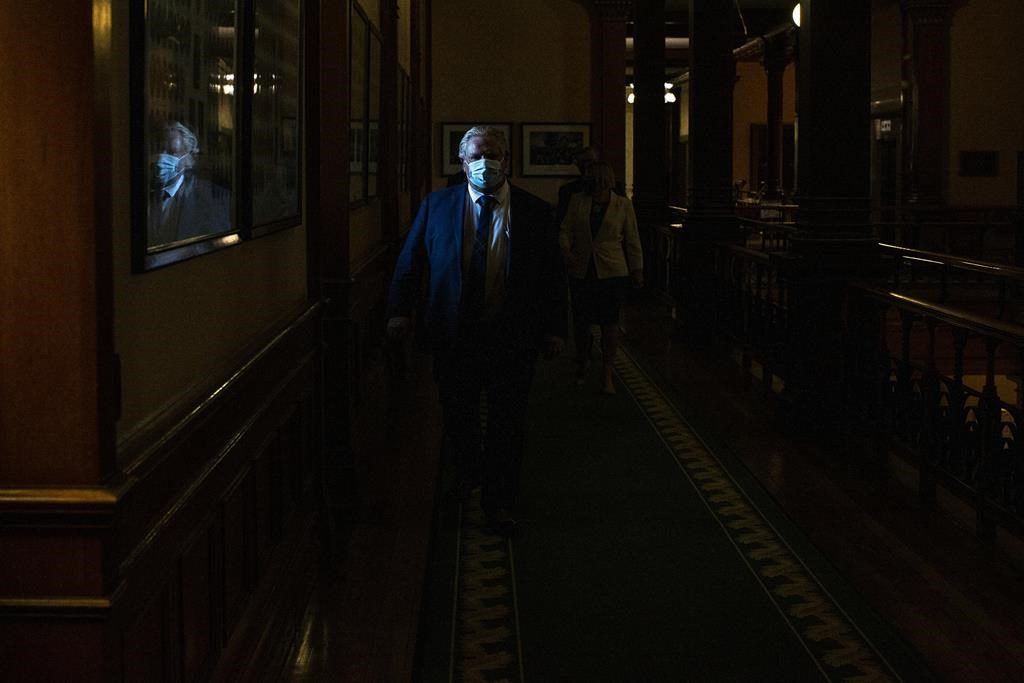 TORONTO â€” Ontario’s plan to use mobile units to vaccinate those aged 18 and older in COVID-19 hot spots will take some time to launch, a member of the province’s immunization task force said Thursday as residents in those areas searched for specifics on the project.

Dr. Dirk Huyer said the plan was being developed “rapidly” but could provide few details a day after it was announced by Premier Doug Ford.

Huyer, who is also the provincial outbreak response co-ordinator, said the government still needs to iron out details with the hot spots of Toronto and Peel Region and work with community leaders.

“That work takes time, to be able to deliver the vaccines, because it’s linking with the community,” he said, noting that mass vaccination clinics will continue to be a vital channel for immunization. “That work is all rapidly in progress.”

Ford announced Wednesday that mobile teams will deliver vaccines to hot spot residents aged 18 and older in congregate settings, residential buildings, faith-based centres and at large workplaces. Regions will be selected based on patterns of transmission, severe illness and mortality from COVID-19.

Humera Iqbal lives in what is considered a hot spot neighbourhood in Mississauga, which is part of Peel, and said she was frustrated at the lack of details from the province.

The 41-year-old said she wants to get vaccinated as soon as she can and criticized the province for not being ready to implement its plan as soon as it was announced.

“It's just another example of the confusion with any of the messages that are coming from the government,” she said.

“I would have expected that … at least in the announcement it would mention ‘it's starting this date, individuals would be eligible,'” she said. “There's no information or indication on when I could expect it, only that I should expect it.”

“Pop-up clinics will also be set-up in highly impacted neighbourhoods to administer vaccines to those 18+, including at faith-based locations and community centres,” Alexandra Hilkene said in a statement.

She said the mobile teams and pop-up clinics will not use the provincial booking system and more details on how to receive an appointment will be provide in the future.

Meanwhile, the top doctor for Peel Region – which includes Mississauga, Brampton and Caledon – said the region will begin moving through five-year age groups every week for residents in hot-spot postal codes as it aims to accelerate the COVID-19 vaccine rollout.

“I am hopeful, because vaccination is here, and while it will need time to be successful, it will position us well to ultimately prevent a fourth wave,” said Dr. Lawrence Loh, the region’s chief medical officer.

Peel public health officials said they will start vaccinating residents of hot-spot postal codes aged 50 and older on Monday, and will descend through the age ranges in five-year increments each week.

Public health experts have said the novel coronavirus is hardest to control in cities such as Brampton where households are larger and there’s a higher proportion of essential service workers.

Officials with Peel Region said their vaccination timeline could be extended depending on vaccine supply or if uptake in an age group is higher than predicted. They estimate that they will be able to give 65 per cent of the region’s population their first shot by early June.

Meanwhile, a stay-at-home order took effect on Thursday as the province sought to bring soaring COVID-19 cases under control.

Ontario reported 3,295 new cases of COVID-19 on Thursday and 19 more deaths linked to the virus.

Residents received emergency alerts about the order on their cellphones, radios and televisions Thursday morning, asking them to only leave home for essential purposes such as  food, health care, exercise or work.

Under the new rules, stores that sell goods such as groceries, cleaning supplies and pharmacy products can remain open but only to sell essential items. Non-essential retail can open for curbside pickup or delivery only.

The province also promised to expand access to asymptomatic testing for students and school staff during spring break next week. Previously, students were only able to access a test without symptoms if they were a close contact of a confirmed case of COVID-19 or were part of the government’s surveillance testing.

-with files from Denise Paglinawan.

This report by The Canadian Press was first published April 8, 2021.

Note to readers: This is a corrected story. An earlier version incorrectly said Peel Region will start vaccinating all residents aged 50 and older on Monday.