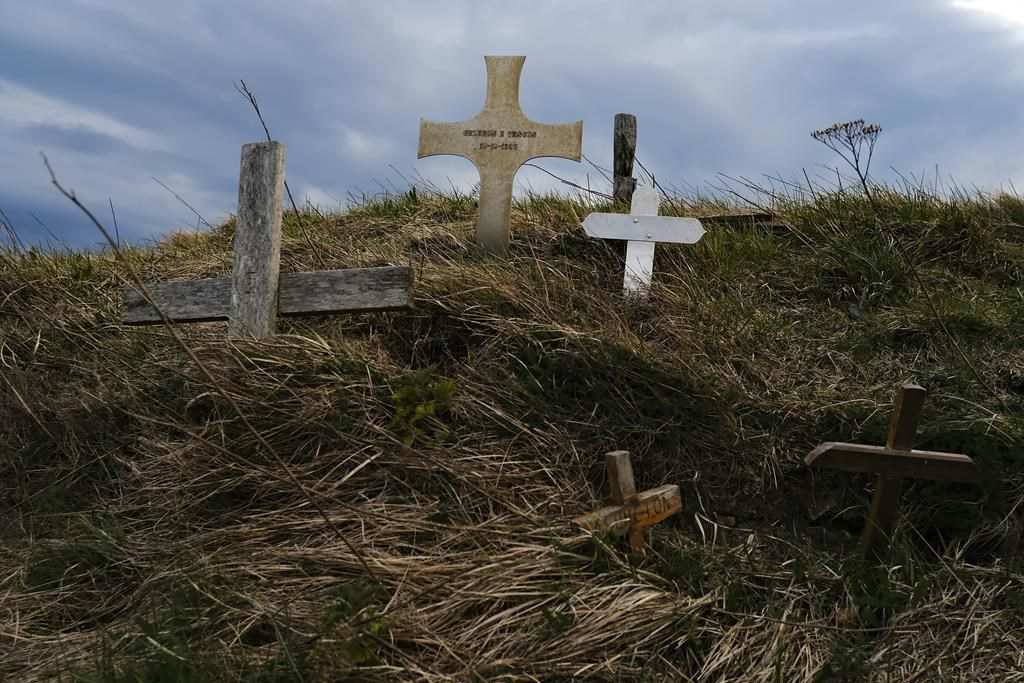 SANTIAGO DE COMPOSTELA, Spain (AP) — Committing to the pilgrim’s path has for centuries been a source of renewal for those willing to put their lives on hold and spend days, weeks or even months crossing Spain along the Camino de Santiago, a journey that takes hikers to the reported burial place of the apostle St. James.

But after a year of being kept off the Way of St. James due to pandemic-related travel restrictions, soul-searchers hoping to heal wounds left by the coronavirus are once again strapping on backpacks and following trails marked with a seashell emblem to the shrine in the city of Santiago de Compostela.

Some travelers taking to the Camino are like Laura Ferrón, whose marriage ended during Spain’s lockdown and who fears she might lose her job because the bank she works for plans massive layoffs. She and two lifelong friends flew from their homes in Spain’s North Africa enclave of Ceuta to spend a week walking the final 100 kilometers (62 miles) of the pilgrimage route.

“This helps you let it all go. This pandemic has taught us to give more importance to what we have and to take a good long look at yourself,” Ferrón, 33, said while resting on a climb near Arzúa. The village in the green hills of northwest Spain is about two days away from the medieval cathedral in Santiago that is the traditional ending point.

The Camino de Santiago is actually a series of paths that fan out beyond the Iberian Peninsula and spread across Europe. Whichever route one takes, they all end at the Santiago’s baroque cathedral, where believers can visit what is said to be the tomb of James, the apostle who, according to Catholic tradition, brought Christianity to Spain and Portugal.

The pilgrimage has its roots in the alleged discovery of the tomb in the 9th century. Pilgrims have come to Santiago for a millenium, but the number of both believers and non-believers making the trip boomed in recent decades after regional authorities revived the route.

It is now supported by a wide network of religious and civic organizations and served by public and private hostels at prices for all pocketbooks.

Over 340,000 people from all over the world walked “El Camino” in 2019. Only 50,000 walked it last year, when Spain blocked both foreign and domestic travel except for during the summer months.

Before a state of emergency that limited travel between Spain’s regions ended on May 9, only a handful of Spanish pilgrims were arriving in Santiago each day and registering with the Pilgrim’s Reception Office to receive their official credential for having completed the pilgrimage.

Now that travel is again permitted, more people from Spain and elsewhere in Europe are walking the ancient path, although many of the hostels that cater to pilgrims them are still closed. A few hundred arrive in Santiago each day, compared to the several thousand exhausted pilgrims swinging their walking sticks along the city’s cobblestone streets during a typical summer.

Spain’s Health Ministry has reported the deaths of over 79,000 people from COVID-19. As it did around the world, the disease took its biggest toll on the country’s oldest residents.

“For old people, one year of pandemic has felt like five,” Naty Arias, 81, said while walking the Camino with her 84-year-old husband and two of their daughters. “And like my husband says, we don’t have that much time left anyway, so we have to make the most of it.”

The numbers of pilgrims arriving in Santiago over the next year-and-a-half will be boosted after Pope Francis extended the 2021 holy year dedicated to St. James through 2022. For Roman Catholics who take part in the pilgrimage, walking it during a Jubilee Year gives them the chance to receive the plenary indulgence, which grants them the full remission of the temporal punishment for their sins. The last Jubilee Year for the trail was in 2010.

Santiago Archbishop Julián Barrio said he is cautiously optimistic that some 300,000 pilgrims could turn out this year, as long as the pace of Spain’s vaccination program and the health situation worldwide continues to improve. He expects many to come seeking solace from the pain of the pandemic.

“The Way of St. James, in this sense, can help us. It is a space that helps us recover our inner peace, our stability, our spirit, which without doubt we all need, given the difficulties that we have in facing the pain and the ravages of the pandemic that sometimes leave us speechless,” Barrio told The Associated Press.

Daniel Sarto, 67, joined three friends on the trail, looking to relax after months of stress from seeing his Barcelona-based trade show company bring in zero revenue.

“It has been a very, very, very hard year. Psychologically, it is very sad constantly thinking that this is going nowhere, about what will happen to our employees,” Sarto said. “This is a relief being here, without a doubt. My wife told me that I had to get out of the house. I had to come.”

Mental health experts agree that the pilgrimage can lead to emotional healing for both faithful Roman Catholics and the large number of non-Catholics who are drawn to make one. Dr. Albert Feliu, a health psychologist and lecturer at the Autonomous University of Barcelona, said preliminary results from a survey of 100 pilgrims point to a reduction of stress and depression that surpass those seen after regular vacations.

The survey was part of a multi-year study of the benefits of walking the Camino de Santiago being done by clinical researchers from universities in Spain and Brazil. Manu Mariño, the director of Quietud Mindfulness Center in Santiago, is also involved in the research. He has gone on the pilgrimage 24 times.

“The Way of St. James is a very good place to help us realize that suffering forms part of life, and that our suffering depends on how we relate to what we are experiencing,” Mariño said. “You learn to live with just what is necessary, which means exactly what you can carry in a backpack.”

Vladimir Vala, a 25-year-old university graduate in business, came to Spain to walk for three weeks before returning to the Czech Republic to get married. For Vala, the pandemic has one positive facet among all the misery, that he feels dovetails with the experience of walking, mostly by himself, day after day through the countryside.

“People were alone and they had to face themselves (during the pandemic),” Vala said after visiting the cathedral. “And I think the Camino is (about) facing yourself in its meaning. So it comes together really close. It’s beautiful and hard.”

The newly divorced Ferrón had a similar assessment.

“The trail is good for your mental health because all this can drive anyone crazy, being locked up, the fear, the psychosis,” she said. “Some climbs are really hard, but at the end of the day you reach your goal and then you have the reward of a cold beer, which is divine.”

Associated Press religion coverage receives support from the Lilly Endowment through The Conversation U.S. The AP is solely responsible for this content.