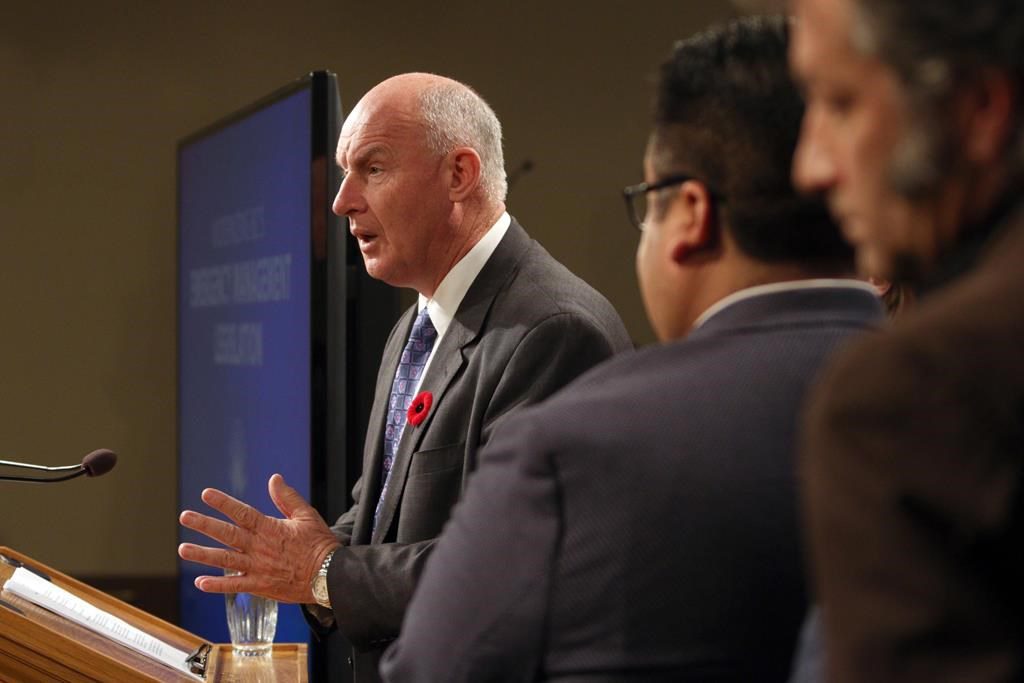 VICTORIA â€” The British Columbia government is looking at using periodic roadblocks to limit travel in a bid to slow the spread of COVID-19.

Mike Farnworth, minister of public safety and the solicitor general, said the checks would be set up at locations like ferry terminals or along major highways leading out of Metro Vancouver.

The goal is to discourage recreational travel, but there will be no random, individual stops, Farnworth said in a statement Tuesday.

“Most British Columbians know they have a part to play in helping to curb the spread of COVID-19 and I am sure they will adhere to the new rules and stay in their region,” Farnworth said.

"Our intention is to discourage recreational and leisure travel, not punish people, and we are not interested in disrupting commuters and people going about their lives.”

He is expected to announce more details on Friday.

Police will wait for an order under the Emergency Program Act and any associated guidelines before proceeding, the Public Safety Ministry said.

The government has been working with the tourism industry to cancel bookings that have been made and to not accept new ones from people living outside their intended destination. BC Ferries will be cancelling reservations that include recreational vehicles such as campers.

Measures that ban indoor dining and adult activities at gyms were also extended for another five weeks, matching the length of the travel restrictions, which will continue until at least May 24.

The province reported 849 new cases on Tuesday, for a total of 120,889 infections, along with one more death, amounting to 1,539 fatalities since the pandemic began.

Provincial health officer Dr. Bonnie Henry and Health Minister Adrian Dix said 1.4 million doses of vaccine had been administered to B.C.’s population of 4.3 million eligible residents and people aged 35 and older could now register online for a vaccine in the age-based program.

B.C. is also ramping up vaccinations with the Oxford-AstraZeneca vaccine in 13 high-risk communities. And it has lowered the eligibility for that vaccine to age 40 from 55, the same as in Alberta, Manitoba and Ontario. Saskatchewan and Quebec will start offering the AstraZeneca vaccine to those 45 and over starting Wednesday following recommendations from a national vaccine panel.

“At the current rates of transmission, our health-care workers and hospitals are getting pushed to the limits to support the many people with COVID-19 who require care,” Henry and Dix said in a statement encouraging people to put any travel plans on hold until it is safe to do so.

Vivek Sharma, chair of the Tourism Industry Association of B.C., said businesses across the province are suffering from the absence of domestic and international travellers. Even some destinations on Vancouver Island and the Okanagan, for example, that have had tourists from within the province can’t survive much longer without year-round bookings from abroad, he said.

The industry needs more financial support from the government as both sides work together to consider what other jurisdictions in Canada and globally are doing to try and boost tourism when it can safely resume with the use of rapid testing for COVID-19, Sharma said.

Ontario has introduced a travel tax credit allowing for a 20 per cent return on every dollar spent on travel within the province this year, with the government setting aside $150 million. Sharma said that’s one example of the types of measures that could be taken to spur a recovery for the sector.

“How are we going to use and deploy rapid testing and reopening the travel economy? What is our position on vaccine passports? How are we going to allow people who’ve been vaccinated greater movement and freedom in travelling wherever they want to travel?”

Horgan said Monday that signs would be posted at the B.C. and Alberta boundary to advise against non-essential travel between the two provinces.

Justin Brattinga, press secretary for Jobs, Economy and Innovation Minister Doug Schweitzer in Alberta, said the province has not heard any specific details from the B.C. government.

"Alberta's government continues to recommend against interprovincial travel and urges all Albertans to follow the public health guidelines,” he said in a statement. “Our No. 1 priority is getting Albertans vaccinated, which will ultimately allow economic activity related to travel and tourism to resume safely."

â€” By Camille Bains in Vancouver