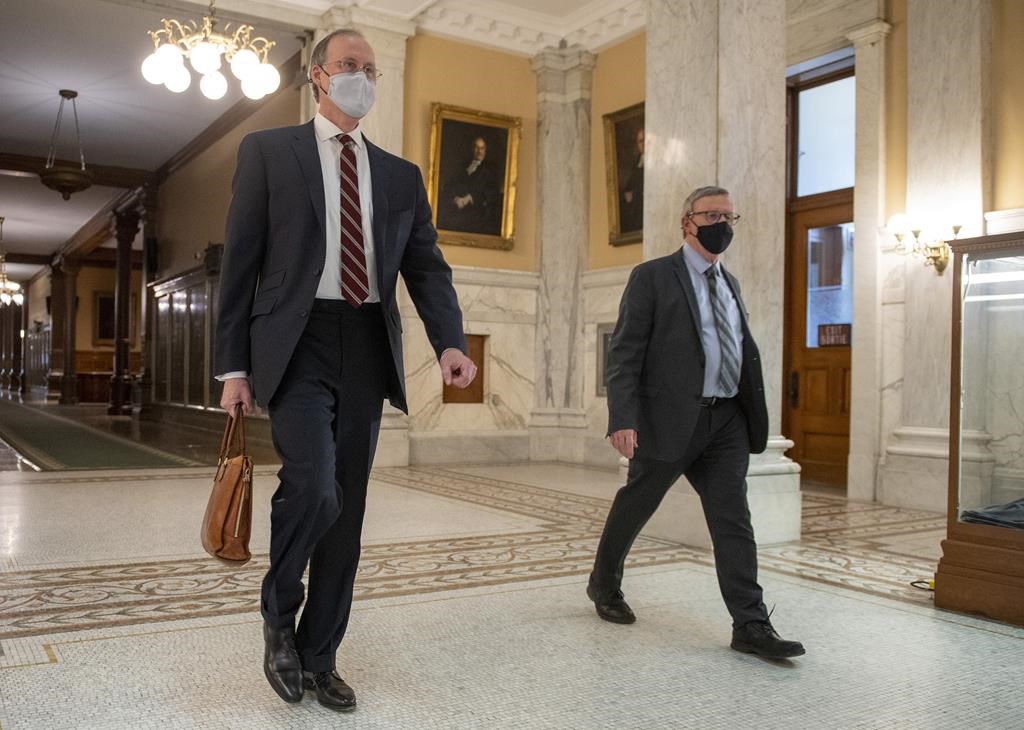 TORONTO â€” Ontario’s Ministry of Long Term Care unveiled new moves it said could ease strain on a hospital system stretched to the limit by mounting COVID-19 cases, as public health officials in one hot-spot region partially closed two warehouses due to the virus.

The ministry announced Saturday that it will try to free up hospital beds by waiving fees for patients who agree to take a spot in a home that may not be their first choice until they’re placed in the facility they want.

The province said patients who opt for an alternative long-term care placement won’t lose their waiting list spots at their preferred facility. If they’re fully immunized, the government said they could also skip the otherwise mandatory isolation period before moving.

The ministry also announced it was relaxing staffing rules instituted earlier in the pandemic, saying long-term care staff who are fully vaccinated are no longer limited to working in just one facility.

It’s an approach the Ontario Hospital Association had been promoting in recent weeks as ICU admissions soared to unprecedented highs.

“Obviously, this has to be done very closely and as collaboratively as possible with long-term care, but in doing so, we will ultimately help provide hospitals with additional staffing flexibility to address the other very significant patient care priorities in hospitals,” association President Anthony Dale said in an interview.

The patient transfer strategy is the province’s latest attempt to curb COVID-19 cases, which have remained high and grown to include 36 cases of a new variant first detected in India.

Ontario reported 4,094 new COVID-19 infections and 24 new virus-related deaths on Saturday alone, adding 2,277 people in the province remain in hospital because of the disease.

Figures showed 833 of those patients were in intensive care, with 600 on ventilators.

The province has hoped its recently increased vaccination efforts, which included making the Oxford-AstraZeneca shot available to residents 40 and older, would reduce those numbers. But the group of experts advising the government believes the provincial strategy may need an overhaul.

The Ontario COVID-19 Science Advisory Table issued a report Friday saying focusing on hot-spot neighbourhoods where COVID-19 infection rates are highest and residents are less able to work from home would reduce hospitalizations by 14 per cent and deaths by 11 per cent.

The group of scientific experts and health system leaders said the current approach, which has largely focused on vaccinating people based on age, health condition or status as a resident of a congregate care setting, has left some of those most at risk least likely to receive a shot.

Residents of neighbourhoods with the lowest risk of COVID-19 are 1.5 times more likely to have received at least one shot, the table’s analysis showed.

“At the same time, COVID-19 continues to disproportionately impact neighbourhoods with the highest proportion of essential workers,” their report reads.

To quell the virus, the group said the province could move to an accelerated strategy that would see half the province’s vaccine supply allocated to 74 neighbourhoods with the highest COVID-19 infection rates.

The remaining half, it said, could be equally distributed across the province.

A spokeswoman for Health Minister Christine Elliot did not indicate whether the province will consider the strategy, but said the government is committed to supporting at-risk communities as more vaccines arrive.

On top of a new hot spot-focused strategy, the table also noted there could be additional benefits if Ontario further prioritized workers in warehouses, factories and other facilities with large numbers of outbreaks.

Peel Region highlighted the risks inherent in such environments on Saturday when it partially closed two Amazon fulfilment centres west of Toronto.

The closures were permitted under new regional measures that grant the power to temporarily shut down workplaces where five or more COVID-19 cases have surfaced within 14 days.

The closures affected an Amazon centre on Heritage Road in Brampton, Ont., as well as one in nearby Bolton. The Brampton facility was previously shut down and workers there were forced to isolate after 240 cases of the virus were linked back to the centre over two weeks in March.

Under Peel's new policy, closures can last up to 10 days and require affected employees to isolate and refrain from working elsewhere during that time.

“Our most recent round of mandatory testing confirmed a positivity rate of approximately 1 per cent, and there appears to be little risk of spread within our facility," Amazon spokesperson Dave Bauer in an email.

The shutdown affects three out of 18 shifts in Brampton and one out of 18 in Bolton, the company said.

All staff asked to isolate will be provided with pay and benefits and the closures will have some short-term impact on customers, it added.

As Peel clamped down on the tech giant, the region recorded 1,014 new COVID cases on Saturday.

That public health unit took a similar tack to the one deployed in Peel, announcing Saturday that it was stepping up workplace investigations in order to best enforce its own workplace closure policy.

Toronto Public Health said 10 workplaces are currently being investigated, and officials expect to announce whether any will have to close starting on Monday.