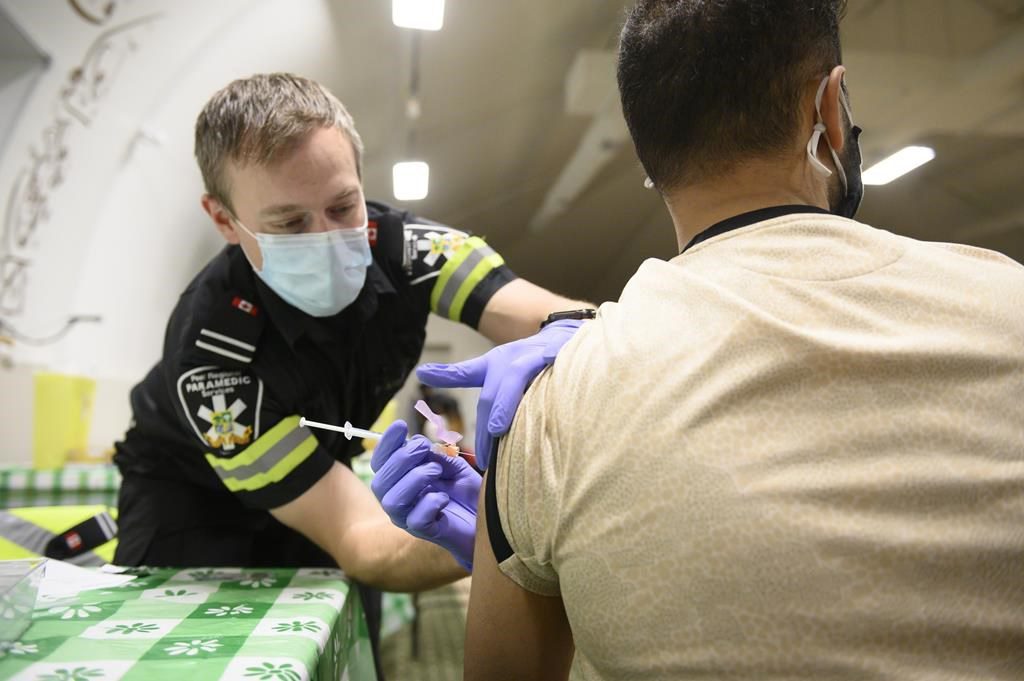 The coming week will see a significant expansion in the number of Ontario residents eligible for a COVID-19 vaccine, the province announced Sunday as it made good on a promise to ramp up efforts in areas hit particularly hard by the pandemic.

The government announced all adults 18 and older living in any of 114 designated hot spot postal codes will be able to book their shots through its online portal as of 8 a.m. Monday. The move comes days after the province pledged to allot half its vaccine supplies to areas with particularly high case counts over the next two weeks.

Eligibility will expand further on Thursday when online bookings open up to residents 50 and older, the province said. Others captured in that expansion include people with high-risk health conditions, those who can’t work from home including teachers and school workers and First Nation, Inuit and Metis people not previously targeted in earlier phases of the immunization drive.

“Continuing to focus on getting vaccines in the arms of those most at risk will help to stop the spread of COVID-19 in these communities, protect our hospital capacity and save lives,” Elliott said in a statement as she urged residents to avail themselves of the expanded eligibility criteria and get vaccinated.

Premier Doug Ford’s government has been criticized for a slow and bumpy vaccine rollout while cases have soared, particularly during the ongoing third wave of the pandemic. But last week Elliott promised a major expansion was on the way thanks to an expected influx of millions of vaccine doses.

The next 14 days will see half of Ontario’s supplies directed to hot spot postal codes, a move first suggested by the provincial science advisers who urged distributing shots based on transmission rate rather than age group to reduce virus-related hospitalizations and deaths.

All adults in hot spots have been cleared for immunization for some time, though they could not book through the provincial website. Instead, residents have been getting shots at pop-up and mobile clinics, sometimes standing in line for hours.

Ontario said it will return to per capita distribution for vaccines on the week of May 17.

If supply holds, the province expects to make those 18 and older eligible for a shot at mass sites provincewide on the week of May 24.

Thursday’s planned expansion to those with high-risk health conditions include those living with obesity, developmental disabilities and treatments requiring immunosuppression among others.

Details of the expanded rollout came as Ontario reported 3,732 new cases of COVID-19 on Sunday, along with 23 more deaths linked to the virus.

Despite the uptick in cases, the province recorded a decrease in both hospitalizations and admissions to intensive care units.