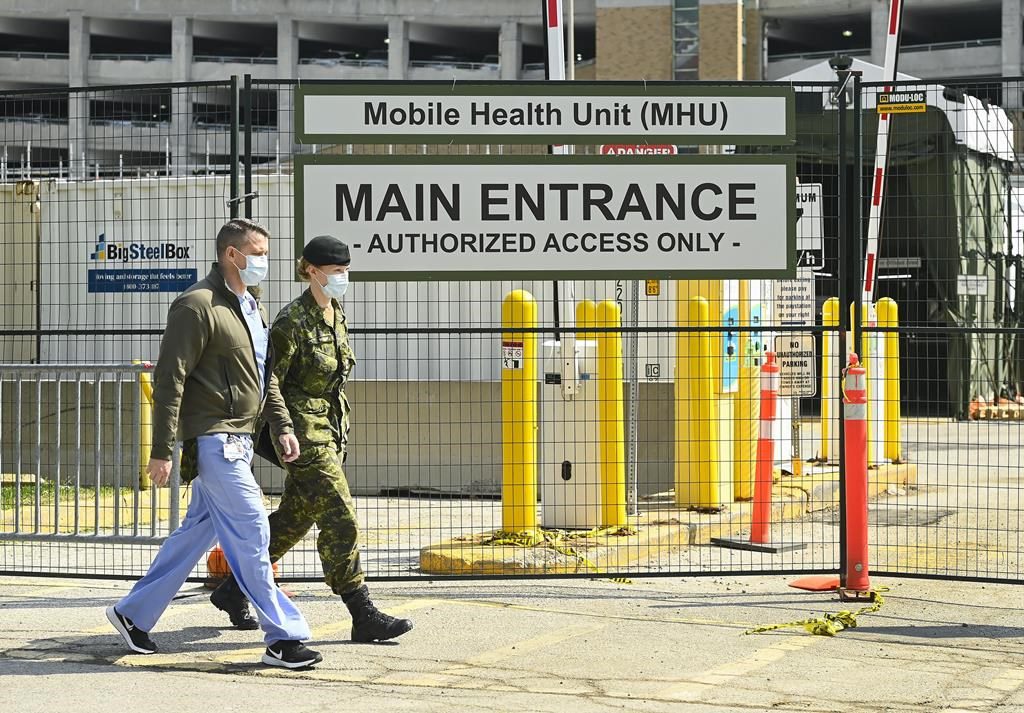 TORONTO â€” Hospitals in Ontario will be able to transfer patients waiting for a long-term care space to any nursing home without their consent, the government announced Wednesday as it scrambled to free up beds for people with COVID-19.

Health Minister Christine Elliott said a new emergency order allowing for the transfers would help ease the immense pressure hospitals were under amid an onslaught of the virus.

“This would be done in only the most urgent of situations, when a hospital is at risk of becoming overwhelmed,” she said.

Elliott said hundreds of patients currently in hospital are waiting to be discharged to a long-term care home.

Transfers without consent will only take place if the patients’ medical team is confident the temporary move will not compromise their condition, she added.

Patients will also be vaccinated before entering the nursing home, not lose their place on a waitlist for their preferred home, and will not subject to the usual co-payment to take the place in the home.

There were 2,281 people hospitalized with the novel coronavirus across Ontario on Wednesday, with 877 in intensive care and 605 are on a ventilator.

Those figures were reported as the province logged 3,480 new cases of COVID-19 slightly lower than numbers seen last week and 24 more deaths linked to the virus.

“You have to see the case counts come down first and then we will see the impact in the ICUs, in hospitalizations, and that timeline can be two to three weeks,” said Matthew Anderson.

NDP Leader Andrea Horwath said she was worried the order would “railroad” people into facilities they don’t want to live in.

“I’m really, really concerned about how this is going to impact people’s access to their loved ones (and) making sure that they’re getting the quality of care that they need,” she said.

Liberal House Leader John Fraser said the government had been forced to impose the new order because it hasn’t done enough to move patients, voluntarily, into safe available nursing home spaces for months.

“We have to take this urgent action, basically overriding people’s rights, because of a failure to plan,” he said.

The president of the Ontario Council of Hospital Unions said he was concerned that patients’ quality of care could be affected.

Michael Hurley said he also believed the government will use the order to address long-standing issues with so-called alternate level of care patients, who were often cited as factors in hospital overcrowding prior to the pandemic.

“They’re going to use this to deal with hallway medicine, they’re going to designate a greater and greater swath of patients, most of whom are older patients, as alternate level of care,” he said.

“That suggests they don’t need to be in hospital, but actually, a significant number of them are still acutely ill. And they still require a high level of care, and they’re not going to get that in long term care.”

Earlier this month, hospitals ramped down non-urgent procedures and were also given the authority to transfer patients to other hospitals without their consent.

Health-care workers from other provinces and non-hospital settings are also now authorized to work in Ontario’s overburdened intensive care units.

“Hospitals are doing everything they can to maintain and sustain capacity by transferring patients out of hotspot regions and redeploying staff and resources but the pressures are unrelenting,” said association CEO Anthony Dale.

“Using temporary policy measures, it may be possible to safely and effectively increase the number of patients being discharged to a care setting more appropriate to their health needs.”

The order came as Ontario’s auditor general issued a report Wednesday saying the province’s nursing homes were woefully unprepared for the pandemic due to years of failure to address known problems.

Bonnie Lysyk cited poor ministry oversight and a severe staffing shortage that existed even before the pandemic struck, saying both the provincial government and nursing-home sector had not heeded lessons learned from the SARS epidemic.