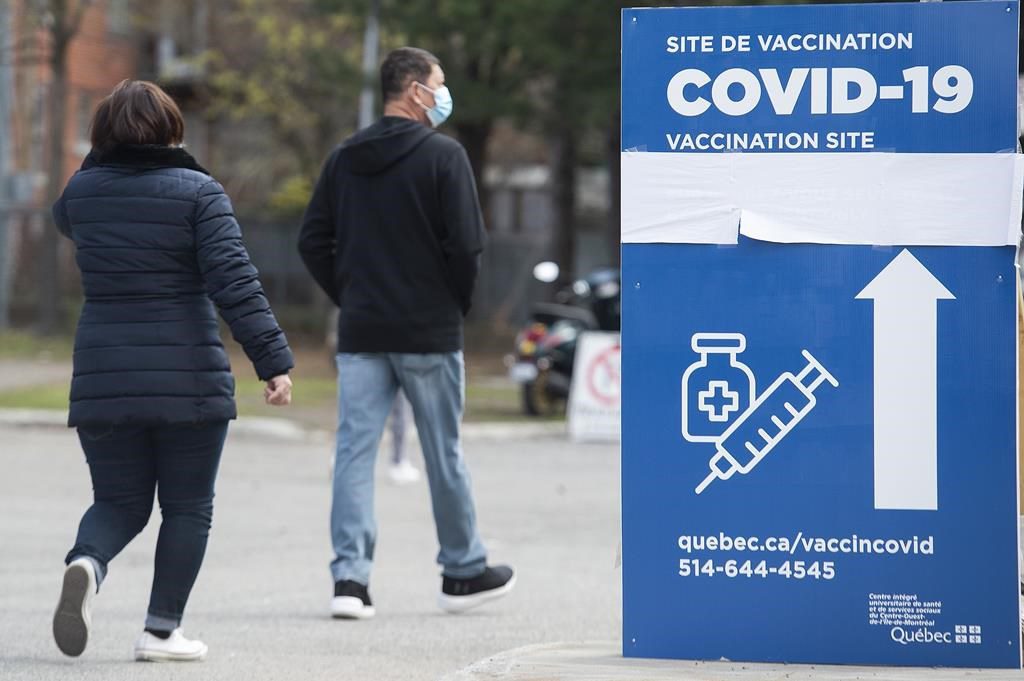 Provinces are free to offer the Oxford-AstraZeneca vaccine to all adults, Canada’s health minister said Sunday as calls mounted in at least one province hard hit by COVID-19 to lower the age restriction on the shot.

While the National Advisory Committee on Immunization has yet to release updated recommendations on the vaccine, Patty Hajdu said provincial officials are not beholden to the group’s current advice to only offer the shot to those 55 and older.

“NACI provides advice to provinces and territories,” Hajdu told a news conference Sunday. “They can adjust their use for AstraZeneca as per their desire and the advice from their own public health authorities and medical expertise.”

She noted that Health Canada has licensed the AstraZeneca shot for use in people over the age of 18.

“NACI continues to review the advice on AstraZeneca use and will have updated guidance in the very near future,” Hajdu added.

Her comments come as some provinces — particularly Ontario and Alberta — grapple with devastating third waves of COVID-19.

And while Ontario Premier Doug Ford points the finger at a lack of vaccine supply, the head of the association that represents the province’s hospitals argued that AstraZeneca shots were sitting in pharmacy freezers.

Anthony Dale, president and CEO of the Ontario Hospital Association, tweeted that there is “‘surplus supply at risk of expiring,” and the government must act on it.

Many Ontario physicians took to social media to express their frustration with the province’s lack of action on the issue.

“Pharmacies, listen up. DO NOT WASTE A SINGLE DOSE OF THE AZ VACCINE. Explain the risk and obtain informed consent to administer to people under age 55,” Dr. Brian Goldman said in a tweet Sunday.

Steven Del Duca, who heads up the Liberal party in the province, agreed.

“Doug Ford must release the AstraZeneca vaccine from pharmacy freezers and get it into the arms of anyone over 18 in a hot spot,” he tweeted Sunday. “(Patty Hajdu) was clear: there is nothing stopping him from getting shots into arms.”

A spokeswoman for Ontario Health Minister Christine Elliott did not immediately respond to a request for comment on the matter, but the provincial government has previously said it will follow NACI’s recommendations on the shot.

The calls to lower the threshold for the AstraZeneca vaccine extended beyond Ontario’s borders.

“It sounds like Alberta is having trouble using its AstraZeneca. Lower the minimum age; Gen X can help!” Lisa Young, a political science professor at the University of Calgary, tweeted this week.

Some have been hesitant to accept the AstraZeneca vaccine due to a very rare blood clotting condition, which has thus far affected two Canadians.

More than 700,000 doses of the AstraZeneca vaccine have been administered in this country.

The global frequency of the blood clot disorder, known as vaccine-induced immune thrombotic thrombocytopenia, or VITT, has been estimated at about one case in 100,000 to 250,000 doses.

The risk of developing blood clots due to COVID-19 is much higher, and experts say people should accept the first vaccine they’re offered.

Meanwhile, the federal government announced Sunday that it was mobilizing its own resources and co-ordinating with lesser-hit provinces to send health-care workers and other support to help Ontario as it battles record-breaking COVID-19 numbers.

It wasn’t immediately clear how the Ontario government would respond to Ottawa’s offer.

Hospitalizations and admissions to intensive care units continued to reach record heights in Ontario, which reported 4,250 new COVID-19 infections in the the last 24 hours.

Ontario announced a number of new restrictions to quell the skyrocketing numbers, but has faced pressure to roll back limits on outdoor activities, which critics have said will do little to stop the spread.

Meanwhile, data released by Canada’s chief public health officer shows that the average daily number of hospitalizations and deaths in the country jumped by more than 30 per cent between April 9 and 15 compared to the week before.

The latest national-level data found that an average of 3,428 people with COVID-19 were being treated in Canadian hospitals each day during the most recent seven-day reporting period, representing a 34 per cent increase over the week before.

An average of 41 people died each day during the same period, which is 38 per cent higher than the previous week.

Dr. Theresa Tam said cases, test positivity rates and intensive care admissions are all rising as Canada battles a wave of COVID-19 that is driven by more contagious variants.

Quebec, meanwhile, reported more than 1,300 new infections in the past 24 hours.

Farther west, Manitoba recorded 170 new cases of the virus and one added death, while Saskatchewan counted 289 new cases and one death.

Alberta, which is currently dealing with the highest rate of COVID-19 per capita in Canada, reported 1,516 new cases of the virus on Sunday and three more deaths.

This report by The Canadian Press was first published April 18, 2021