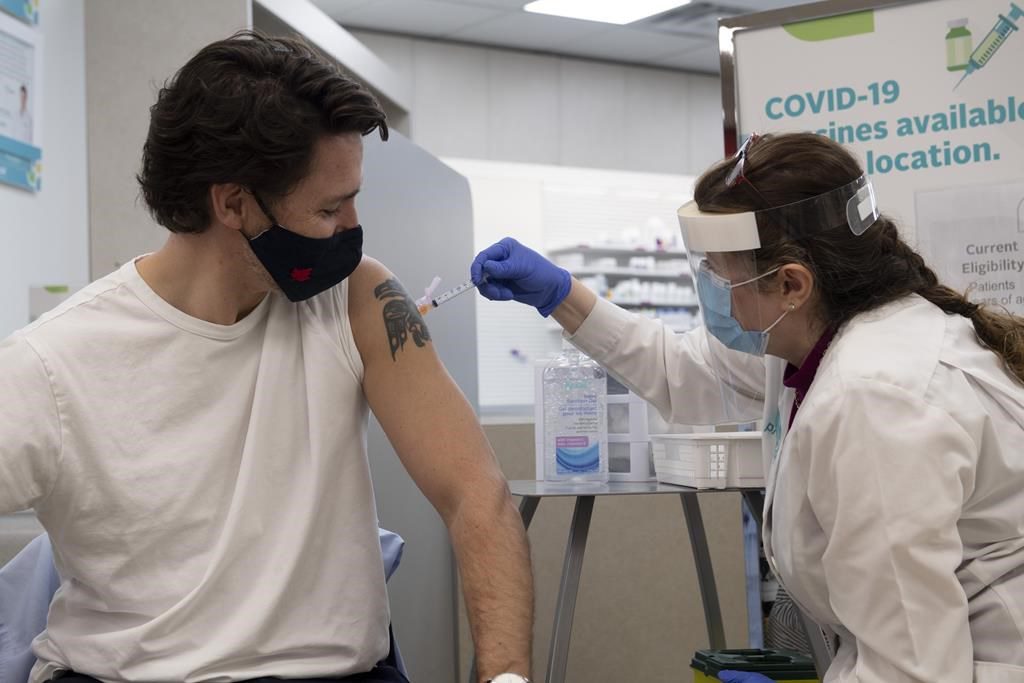 WASHINGTON â€” Canadians have nothing to fear from Oxford-AstraZeneca vaccine doses made in the United States, Prime Minister Justin Trudeau said Friday as he rolled up his sleeve to set an example for the country.

Trudeau and wife Sophie GrÃ©goire-Trudeau both got their first shots of AstraZeneca in full view of the cameras â€” an effort both to encourage others to follow suit and allay persistent fears about the vaccine itself.

The prime minister and his procurement minister, Anita Anand, both insisted that 1.5 million AstraZeneca doses “loaned” by the U.S. were not impacted by quality control problems at a key facility in Baltimore.

“There is absolutely no danger of that for Canadians,” Trudeau told a news conference. “There is no reason for anyone to be concerned.”

It wasn’t immediately clear if the Trudeaus received doses that were manufactured in the U.S.

Anand said the federal government reached out to AstraZeneca when reports first surfaced in the New York Times about chronic problems at a Baltimore plant run by Emergent BioSolutions, where both AstraZeneca and Johnson & Johnson doses were being manufactured.

Emergent announced earlier this month that 15 million doses of the latter were ruined by cross-contamination â€” a development that prompted the White House to put J&J in charge of the facility.

The Times also pointed to shortcomings in basic quality control at the Baltimore plant, including disinfection and contamination protocols that fell short of industry standards, despite a $163-million cash injection from the federal government.

“When this issue first came to light, we contacted the supplier and ensured that the supply that was coming to Canada was not affected by the issues that emerged at the plant,” Anand said.

“This is an issue that we were immediately in touch with the supplier about, and the supplier assured us that these issues had not been affected.”

Officials and researchers around the world have also been investigating a handful of cases of an extremely rare blood clot disorder in small numbers of people who received either the AstraZeneca or the J&J shot.

Public health experts insist that the benefits of either vaccine vastly outweigh the risk of complications, which is small. On Wednesday, Canada’s National Advisory Committee on Immunization cleared the AstraZeneca vaccine for use in people over 30.

On Wednesday, President Joe Biden mentioned Trudeau by name when he mused aloud that the U.S. would likely be providing additional vaccine help to Canada in the coming days.

“We helped a little bit there,” Biden said. “We’re going to try to help some more.”

Afterward, government officials in Ottawa seemed caught off guard by the president’s comments, but Trudeau insisted Friday he wasn’t surprised.

“I had spoken earlier that day with President Biden about our situation and how we could continue to work together,” he said. “So it was not a surprise when he brought it up in the press conference.”

Anand said talks about further vaccine exchanges between the two countries are ongoing, as reflected by the president’s comments.

“We should always remember that our portfolio of seven contracts provides us with the basis for undertaking these negotiations,” she said.

“The fact we had the contract with AstraZeneca, for example, allows us to do the exchange agreement where we are drawing down on the 20 million doses that we have procured from AstraZeneca.”