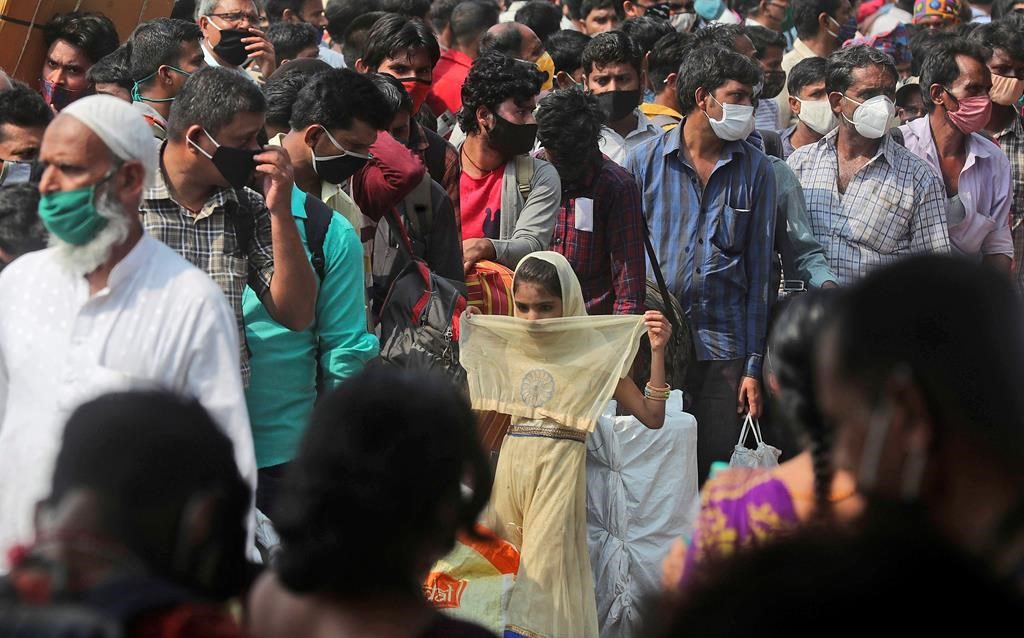 NEW DELHI â€” Seema Gandotra, sick with the coronavirus, gasped for breath in an ambulance for 10 hours, as it tried unsuccessfully at six hospitals in India’s sprawling capital to find an open bed. By the time she was admitted, it was too late, and the 51-year-old died hours later.

Rajiv Tiwari, whose oxygen levels began falling after he tested positive for the virus, has the opposite problem: He identified an open bed, but the 30-something resident of Lucknow in Uttar Pradesh can’t get to it. "There is no ambulance to take me to hospital," he said.

Such tragedies are familiar from surges in other parts of the world â€” but were largely unknown in India, which was able to prevent a collapse in its health system last year through a harsh lockdown. But now they are everyday occurrences in the vast country, which is seeing its largest surge of the pandemic so far and watching its chronically underfunded health system crumble.

Tests are delayed. Medical oxygen is scarce. Hospitals are understaffed and overflowing. Intensive care units are full. Nearly all ventilators are in use, and the dead are piling up at crematoriums and graveyards. India recorded over 250,000 new infections and over 1,700 deaths in the past 24 hours alone, and the U.K. announced a travel ban on most visitors from the country this week. Overall, India has reported more than 15 million cases and some 180,000 deaths â€” and experts say these numbers are likely an undercounts.

India’s wave of cases is contributing to a worldwide rise in infections as many places experience deepening crises, such as Brazil and France, spurred in part by new, more contagious variants, including one first detected in India. More than a year into the pandemic, global deaths have passed 3 million and are climbing again, running at nearly 12,000 per day on average. At the same time, vaccination campaigns have seen setbacks in many places â€” and India’s surge has only exacerbated that: The country is a major vaccine producer but was forced it to delay deliveries of shots to focus on its domestic demand.

Bhramar Mukherjee, a biostatistician at the University of Michigan who has been tracking India's pandemic, said India failed to learn from surges elsewhere and take anticipatory measures.

When new infections started dipping in September, authorities thought the worst of the pandemic was over. Health Minister Harsh Vardhan even declared in March that the country had entered the "endgame" â€” but he was already behind the curve: Average weekly cases in Maharashtra state, home to the financial capital of Mumbai, had tripled in the previous month.

Mukherjee was among those who had urged authorities to take advantage of cases being low earlier in the year to speed up vaccinations. Instead officials dithered in limiting huge gatherings during Hindu festivals and refused to delay ongoing elections in the eastern West Bengal state, where experts fear that large, unmasked crowds at rallies will fuel the spread of the virus.

Now India’s two largest cities have imposed strict lockdowns, the pain of which will fall inordinately on the poor. Many have already left major cities, fearing a repeat of last year, when an abrupt lockdown forced many migrant workers to walk to their home villages or risk starvation.

New Delhi, the capital, is rushing to convert schools into hospitals. Field hospitals in hard-hit cities that had been abandoned are being resuscitated. India is trying to import oxygen and has started to divert oxygen supplies from industry to the health system.

It remains to be seen whether these frantic efforts will be enough. New Delhi’s government-run Sanjay Gandhi Hospital is increasing its beds for COVID-19 patients from 46 to 160. But R. Meneka, the official co-ordinating the COVID-19 response at the hospital, said he wasn’t sure if the facility had the capacity to provide oxygen to that many beds.

The government-run hospital at Burari, an industrial hub in the capitals’ outskirts, only had oxygen for two days Monday, and found that most vendors in the city had run out, said Ramesh Verma, who co-ordinates the COVID-19 response there.

"Every minute, we keep getting hundreds of calls for beds," he said.

Kamla Devi, a 71-year-old diabetic, was rushed to a hospital in New Delhi when her blood sugar levels fell last week. On returning home, her levels plummeted again but this time, there were no beds. She died before she could be tested for the virus. "If you have corona(virus) or if you don’t, it doesn’t matter. The hospitals have no place for you," said Dharmendra Kumar, her son.

Laboratories were unprepared for the steep rise in demand for testing that came with the current surge, and everyone was "caught with their pants down," said A. Velumani, the chairman and managing director of Thyrocare, one of India’s largest private testing labs. He said that the current demand was three times that of last year.

India’s massive vaccination drive is also struggling. Several states have flagged shortages, although the federal government has claimed there are enough stocks.

India said last week that it would allow the use of all COVID-19 shots that had been greenlit by the World Health Organization or regulators in the United States, Europe, Britain or Japan. On Monday, it said that it would soon expand vaccinations to include every adult in the country, an estimated 900 million people. But with vaccine in short global supply, it isn’t clear when Indian vaccine makers will have the capacity to meet these goals. Indian vaccine maker Bharat Biotech said it was scaling up to make 700 million doses each year.

Meanwhile, Shahid Malik, who works at a small supplier of oxygen, said that the demand for medical oxygen had increased by a factor of 10. His phone has been ringing continuously for two days. By Monday, the shop still had oxygen but no cylinders.

He answered each call with the same message: "If you have your own cylinder, come pick up the oxygen. If you don't, we can't help you."

The Associated Press Health and Science Department receives support from the Howard Hughes Medical Institute's Department of Science Education. The AP is solely responsible for all content.