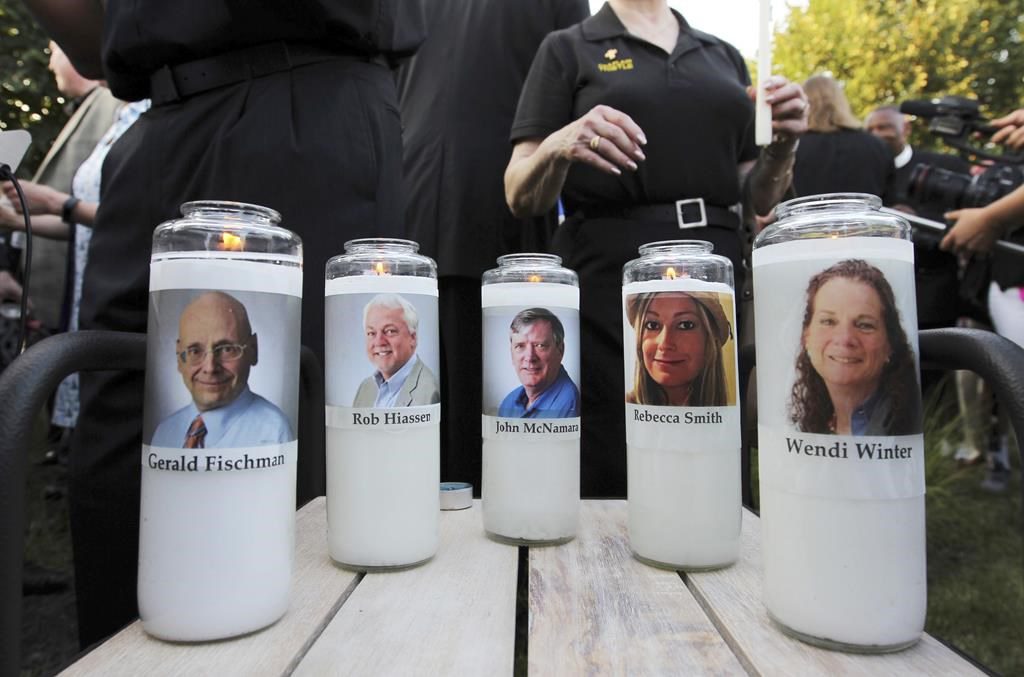 ANNAPOLIS, Md. (AP) — The man who shot and killed five people at a Maryland newspaper told a state psychiatrist he wanted to destroy a building “Timothy McVeigh-style” and that there was “no defense” for the crimes he committed, attorneys said during a court hearing Wednesday.

Attorneys said Jarrod Ramos spoke of thinking about destroying the Capital Gazette office during an interview with a state psychiatrist . He also talked about targeting the building where Maryland’s two appellate courts are located.

Lawyers for Ramos tried to persuade a judge to redact statements their client made to a state psychiatrist in a report that will be part of the second phase of his trial to determine whether he is criminally responsible for the June 2018 attack at the Capital Gazette due to his mental health. Ramos already has pleaded guilty but not criminally responsible due to insanity.

Matthew Connell, one of Ramos’ lawyers, argued that reports by expert witnesses in the case were “hearsay” and “prejudicial” and should not be admissible. Judge Michael Wachs ruled the reports were admissible, but he said some material in them would be redacted.

Dr. Sameer Patel, a psychiatrist with the state Health Department, interviewed Ramos after the shooting as part of a mental health evaluation and found him to be legally sane. The report has been under seal. Attorneys for Ramos have said experts on the defense team reached a different conclusion.

In addition to referring to McVeigh, whose fertilizer truck bomb ripped apart the Alfred P. Murrah Federal Building on April 19, 1995, killing 168 people, Ramos also mentioned the 2018 shooting at Marjory Stoneman Douglas High School in Parkland, Florida, that left 17 dead, and the 1999 shooting at Columbine High School in suburban Denver that left 12 students and one teacher dead, the psychiatrist wrote in his report.

He wrote that Ramos also told him initially he didn’t want a lawyer because “there is no defense for the crime I committed.”

Ramos’ attorney Katy O’Donnell argued that the references should be redacted from the record because they are prejudicial to her client. But Anne Arundel County State’s Attorney Anne Leitess contended the references pointed to Ramos’ thoughtful planning of the attack and indicated that he understood the criminality of his actions.

Wachs denied the request for redaction on those points.

The court has started preparing to select a jury in the high-profile case in Maryland’s small state capital by summoning 300 people to the courthouse to fill out a questionnaire. Jury selection is set to begin June 23. Opening statements are scheduled to begin June 29, a day after the third anniversary of the attack.

Ramos, 41, had a well-documented history of harassing the newspaper’s journalists. He filed a lawsuit against the paper in 2012, alleging he was defamed in an article about his conviction in a criminal harassment case in 2011. The defamation suit was dismissed as groundless, and Ramos railed against staff at the newspaper in profanity-laced tweets.

Ramos also was angry at the courts for dismissing his case. One of three letters he sent on the day of the shooting went to Maryland’s Court of Special Appeals, the state’s intermediate appellate court, addressed to retired Judge Charles Moylan Jr., who decided against Ramos in his defamation case.

Ramos pleaded guilty in October 2019 to all 23 counts against him for killing John McNamara, Gerald Fischman, Wendi Winters, Rob Hiaasen and Rebecca Smith.

If Ramos were found not criminally responsible, he would be committed to a maximum-security psychiatric hospital instead of prison.

Under Maryland law, a defendant has the burden to show by a preponderance of the evidence that he is not criminally responsible for his actions. State law says a defendant is not criminally responsible for criminal conduct if, because of a mental disorder or developmental disabilities, he lacked substantial capacity to appreciate the criminality of his conduct.