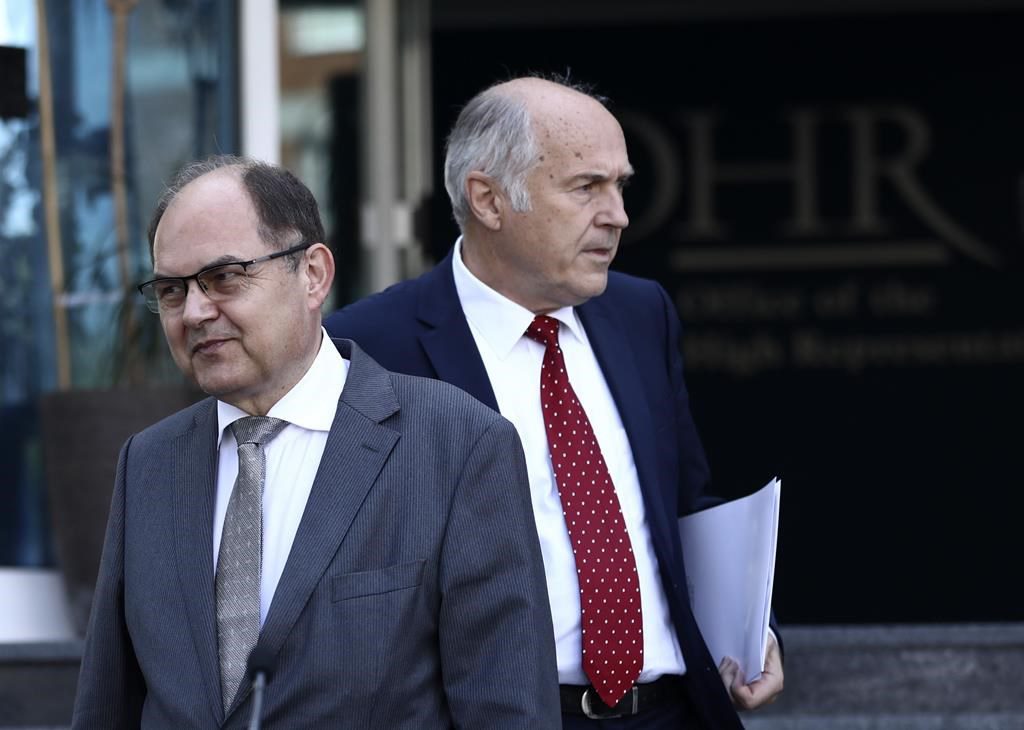 SARAJEVO, Bosnia-Herzegovina (AP) — A German diplomat on Monday took office as the top international envoy to Bosnia, facing opposition from the country’s Serbs, who have rejected both his appointment and a ban on genocide denial brought by his predecessor.

Christian Schmidt took over from Valentin Inzko, an Austrian diplomat, at a ceremony in the capital, Sarajevo. The Office of High Representative that Schmidt will run was established after Bosnia’s 1992-95 war to oversee peace implementation and promote reconciliation and development.

While backed by the United States and the European Union, the United Nations office has recently has faced criticism from Bosnia’s Serbs and their allies Russia and China, who have demanded that it be dismantled, reflecting a bid by Moscow and Beijing to increase their influence in the Balkans.

In a speech, Schmid pledged that he will work to help Bosnia reach stability and economic prosperity nearly three decades after the war that killed over 100,000 people and left millions homeless. He also urged the international community to step in more resolutely to help achieve these goals.

“Bosnia-Herzegovina must be put back on the political agenda of the international community and the European Union,” he said. “I take office with a firm will to help the people here.”

As the top international body in Bosnia, the OHR has the authority to impose decisions or dismiss officials who undermine the post-war ethnic balance and reconciliation efforts among the Bosniaks, who are mostly Muslim, and the Bosnian Serbs and Croats.

A decision earlier this month by Inzko to impose a ban on genocide denial has angered Bosnian Serbs, who have sought to minimize the scope of the 1995 massacre in Srebrenica of more than 8,000 Bosniaks, Europe’s only post-World War II genocide.

Inzko also banned the glorification of war criminals. He was appalled that Bosnian Serbs widely honor their wartime political leader Radovan Karadzic and military commander Ratko Mladic as heroes, though both have been convicted of genocide and sentenced to life in prison by an international tribunal.

In response, the Bosnian Serb nationalists have pledged to block Bosnia’s joint institutions and the assembly of the Bosnian Serb entity, the Republika Srpska, has overwhelmingly rejected Inzko’s decision.

In addition, Bosnian Serb leader Milorad Dodik, who has repeatedly campaigned for the separation of the Serb entity from Bosnia, also has rejected Schmidt’s appointment as “illegal” and announced a boycott of his future moves.

The dispute illustrates ongoing tensions in Bosnia long after the war that started after Bosnian Serbs rebelled against the country’s split from the former Yugoslavia and took control over large swaths of territory to create an own self-styled state, expelling Bosniaks and Croats.

The genocide in Srebrenica happened after Bosnian Serbs took control over the eastern enclave in July 1995. They executed Bosniak men and boys and dumped their remains into mass graves which were later dug up and reburied to cover the crime. The victims’ remains are still being unearthed and identified.

Schmidt said that the goal for Bosnia now must be to strengthen the country and move it closer to EU membership that it is striving to achieve. He cited German reunification as an example that “miracles are possible.”

“It will be our job to overcome boundaries in people’s mind,” he said.