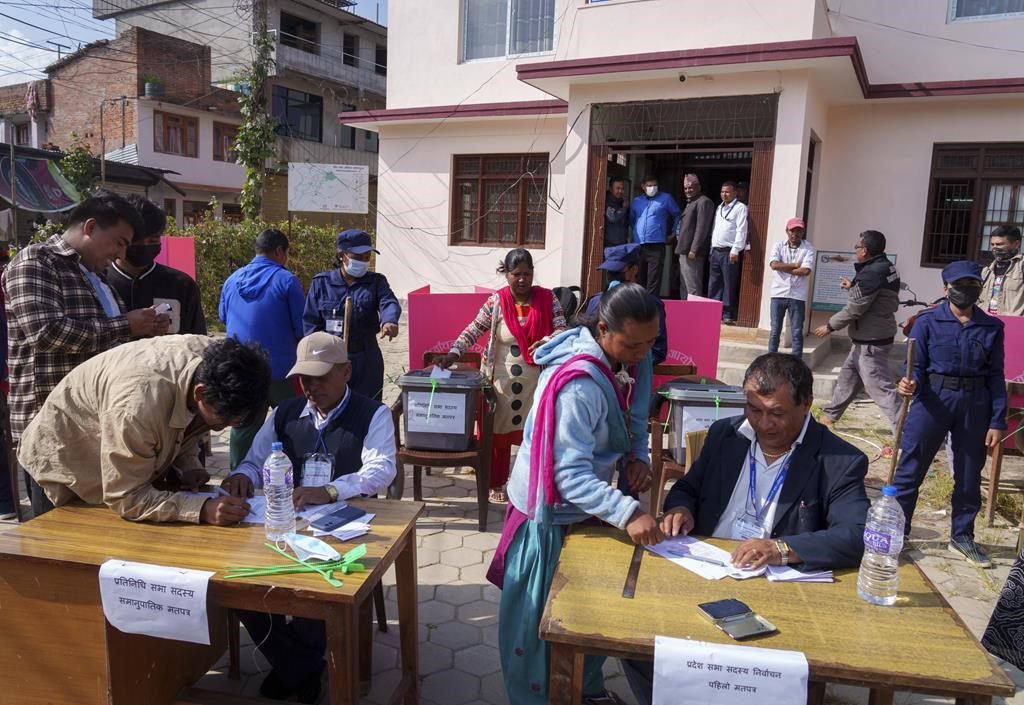 KATHMANDU, Nepal (AP) — Nepal’s parliamentary elections being held Sunday are the fourth since the Himalayan nation abolished a centuries-old monarchy and became a republic. Nepalis have seen little change since, with the same generation of leaders holding power through their control of the main political parties.

Many voters say they are tired of the same leaders retaining power and failing to deliver on promises to improve people’s lives while the country makes little progress.

Political instability has left Nepal with 13 different governments in the past 16 years. The frequent changes and squabbles among parties have been blamed for a slow economy.

“My preference will be for young leaders who will be able to be dedicated to work for the country,” business executive Hari Bhattarai, 40, said as he watched an election rally in the capital, Kathmandu.

“I don’t see any candidates other than the young leaders to be elected to move the country forward who will work for the economy, to boost the economy and repair the economy that was pushed back by the pandemic,” he said.

Social media users are sharing a “no not again” campaign asking others not to return the same old leaders to parliament who would eventually be leading the government.

“The ‘no not again’ campaign did not come just like that. All good changes in the world have been done by the younger leaders,” said Yagya Mani Neupane, a lawyer. “The people who made changes in the 1990 democracy movement when they were younger are still leading the country but have made little difference in the country now.”

Nepal’s current Prime Minister Sher Bahadur Deuba, 76, has been in the position five times. Both prominent leaders of the communist parties, Pushpa Kamal Dahal, 67, and Khadga Prasad Oli, 70, have been prime minister twice each.

Meanwhile, Nepal’s population is young, with 49% age 24 or under.

Analysts said many voters are seeking fresh leadership and though changes are being seen, it was but unlikely in the next elected government.

“They (voters) want to change the old guards who have been failed to ensure good governance, rule of law in this country and justice,” said Bhojraj Pokharel, an independent analyst who is also the country’s former chief election commissioner.

The desire for change in political leadership was evident in April when a moderately known rap musician was elected Kathmandu mayor. Balen Shah, who is not affiliated with any political party, won a comfortable majority of votes while defeating well-known politicians.

Pokharel said Sunday’s election is unlikely to bring many young leaders to parliament because most of the candidates fielded by political parties are from the older generation.

“For the new generation to take over the government, we will have to wait until the next election,” he said.

He added that even a small number of young members can have influence and that a good track record once they are elected can create an environment to bring more of their voices into parliament.

One of the most prominent candidates in the younger generation is Gagan Thapa of the ruling Nepali Congress party. He has announced that after the election he will contest within the party against Deuba to be the candidate for the next prime minister.

“My preparation is for contesting as the prime minster candidate and I am making my public position with that goal,” Thapa said. “Just not me, I am appealing to all the other candidates in the party who win the election to be part of the change.”

The politicians leading the country and parties have been blamed for squabbling with each other for power while the country was struggling with the coronavirus pandemic and its economic impact.

“Our economy is in bad shape, people are really frustrated, without working with sense of urgency we will not yield positive results, if we continue the old ways of working following the traditional format of governance there will be no results,” he said. “For that there needs to be change in the core place of governance.”

“Without sitting in the driving seat there is not going to be any big change,” Thapa said.

Election results are likely to take days if not weeks as some ballot boxes need to be carried from remote mountain villages. Once all votes are counted, the elected members in parliament will chose a prime minister who will have to get support of half the total members.

The next government, likely a coalition, is going to face challenges of keeping a stable political administration, revive the tourism industry and balance relation between the giant nations that neighbor the tiny country — China and India.