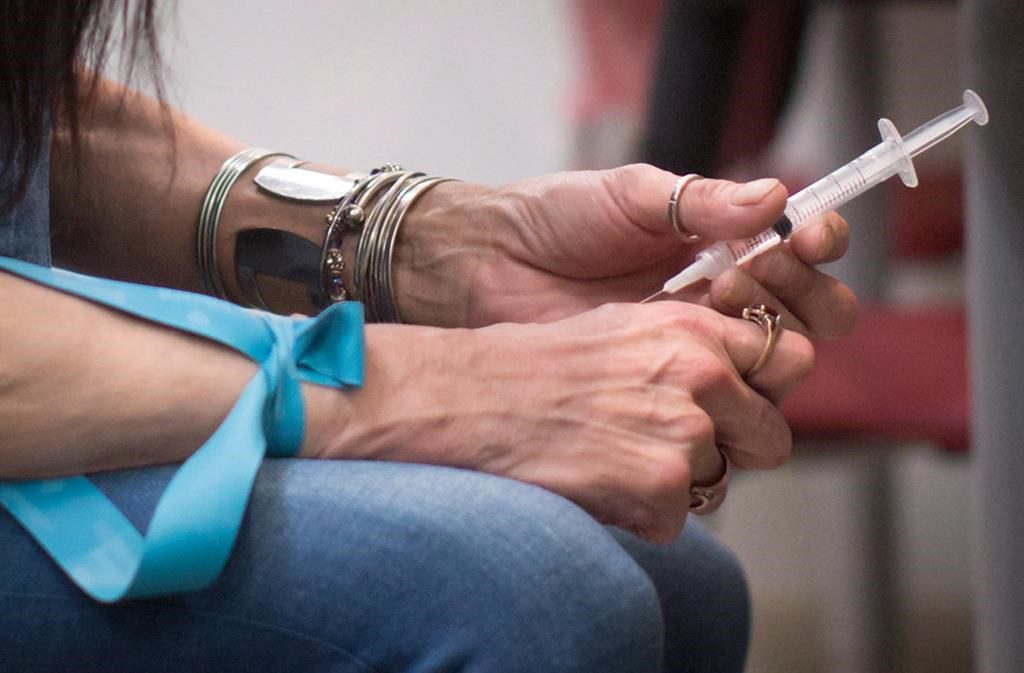 OTTAWA â€” An NDP lawmaker is tabling legislation to decriminalize drug use in Canada, seeking to treat it as a health issue amid a lethal opioid crisis.

The legislation is unlikely to reach the debate stage, but Davies says current federal policy is causing “unneeded deaths,” despite moving in the right direction recently.

“Decades of criminalization, a toxic illicit street supply and a lack of timely access to harm reduction, treatment and recovery services have caused this ongoing catastrophe. It's time to treat substance use and addiction as the health issues they truly are,” he said at a news conference.

The Liberal government has proposed to relax penalties for personal drug possession, tabling a bill in February that would repeal mandatory minimum sentences for drug offences and require police and prosecutors to consider alternative measures for possession cases, including diversion to addiction-treatment programs.

Health Canada is also working with Vancouver on the city’s request for exemption from criminal provisions on simple possession of small amounts of drugs. The city wants people to be allowed to carry a three-day supply of various drugs.

Vancouver has been the epicentre of an opioid crisis that saw British Columbia record 1,176 illicit drug overdose deaths in 2020 â€” the highest ever in a single year â€” and more than 7,000 deaths since a public health emergency was declared in April 2016.

Donald MacPherson, director of the Canadian Drug Policy Coalition at Simon Fraser University, said the Liberals have taken “good” but incremental steps, with the NDP bill representing a fundamentally different approach to drug use rooted in public health.

"Our current drug policy is not fit for purpose anymore. It never was. It was built on punishment, criminalization, imbued with colonial values,” he said in an interview.

“Being incarcerated for possession never improved health, never stopped addiction. What incarceration often does is make people sick and vulnerable. It throws their families into chaos, inflicts legal fees. There is nothing about it that works,” she said at the news conference.

Criminalizing drug use costs taxpayers money and contributes to a shroud of “fear, shame, stigma,” she said, as well as challenges securing housing and employment.

The opioid epidemic has seen more than 20,000 Canadians die from toxic drug overdoses.

“My son Jordan has been gone seven years, but I could cry right now,” McBain said.

Drug users face greater dangers as the third wave of COVID-19 forces harm reduction sites and outreach programs to curtail their services, leaving at-risk communities out in the cold.

In B.C., deaths linked to the synthetic opioid fentanyl had been on the decline for more than a year until last April, when monthly numbers routinely began to double those of 2019.

Opioid-related deaths countrywide could climb as high as 2,000 per quarter in the first half of 2021, far surpassing the peak of nearly 1,200 in the last three months of 2018, according to modelling from the Public Health Agency of Canada.

Benzodiazepines have been detected in drugs circulating in parts of several provinces. Users can be difficult to rouse and slow to respond to naloxone â€” the drug that reverses opioid overdoses â€” and more likely to overdose when fentanyl or other opioids are also in the mix.

The B.C. government has made several commitments to helping drug users, with some supervised consumption sites in the province, as well as overdose prevention sites in many cities.

"A toxic, illicit drug supply is killing far too many and we need to ensure a safer supply to save lives," Liberal MP Nathaniel Erskine-Smith said in an interview.

Governments should “treat patients as patients and not as criminals,” he said, adding that he supports the NDP bill’s principles.

Guy Felicella, a peer clinical adviser with the Overdose Emergency Response Centre and the BC Centre on Substance Use, has long called for regulated supply of opioids so that they’re not only decriminalized but clean.

“Punishment, enforcement, stigma drove me from the community of Richmond into the Downtown Eastside of Vancouver and buried me there for over two decades,” he said.

"This is not a war on drugs, it's a war on people, poverty, homelessness. And it's killing people."

In 2018, the federal government allocated $150 million in one-time emergency funding for provinces and territories to expand treatment services. The federal government announced Wednesday it would spend $7.7 million to expand safe supply with three projects in Toronto that will provide a pharmaceutical alternative to illegal opioids.

The Canadian Association of Chiefs of Police recommended in July 2020 that all police agencies in Canada recognize substance abuse and addiction as health issues and endorsed the decriminalization of personal possession of illicit drugs.