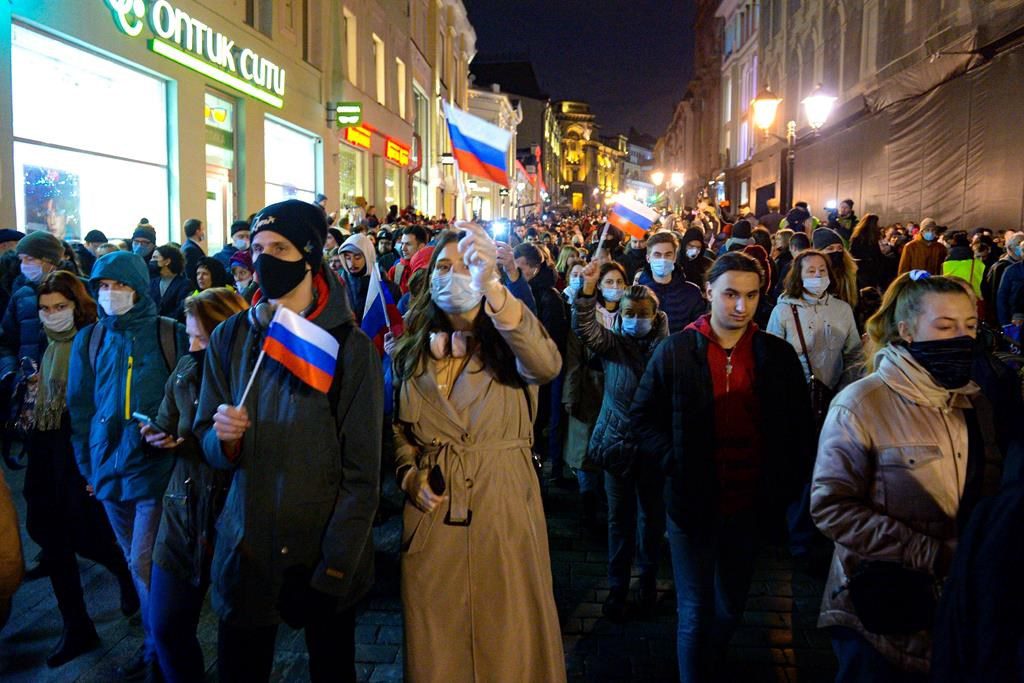 MOSCOW â€” Imprisoned Russian opposition leader Alexei Navalny said in an emotional message from behind bars Thursday that he felt "pride and hope" after learning from his lawyer about the mass protests demanding his freedom that swept across Russia the previous night.

Meanwhile, Navalny’s doctors urged him to "immediately" end a prison hunger strike now in its fourth week "to save his life and health." And a top aide said Wednesday night's protests seemed to have brought a compromise from Russian authorities on getting Navalny the medical help he had demanded when launching the hunger strike.

In an Instagram post Thursday, Navalny called people who turned out to protest in his support "the salvation of Russia.”

The 44-year-old who is President Vladimir Putin’s most well-known critic said he hadn’t known "what was really happening" outside the prison because he only has access to one TV channel, but his lawyer visited him Thursday and brought him up to speed. "And, I will sincerely say, two feelings are raging inside me: pride and hope."

"People are marching in the street. It means they know and understand everything,” said Navalny. “They won’t give up their future, the future of their children, their country. Yes, it will be difficult and dark for some time. But those pulling Russia back historically are doomed. There are more of us in any case."

Navalny was arrested in January upon his return from Germany, where he had spent five months recovering from a nerve agent poisoning he blames on the Kremlin â€” accusations that Russian officials reject.

Soon after, a court found that the politician's stay in Germany violated the terms of his suspended sentence for a 2014 embezzlement conviction and ordered him to serve 2 1/2 years in prison.

The mass street protests in support of Navalny â€” which authorities had declared unlawful â€” swept dozens of cities and smaller towns across Russia. The largest crowds were seen in Moscow, where thousands marched down the city centre amid a heavy police presence.

Yet unlike on past occasions, officers in riot gear didn’t interfere with the rally in the Russian capital, allowing crowds to swarm streets and squares for hours. According to OVD-Info, a rights group that monitors political arrests, police detained only 31 people in Moscow, which usually accounts for the vast majority of arrests across the country.

But overall, OVD-Info tallied more than 1,900 arrests Wednesday night, with more than 800 in St. Petersburg. While some violent detentions, with police using stun guns, were reported in St. Petersburg, in many cities the demonstrations went on without clashes with law enforcement.

Leonid Volkov, Navalny’s top strategist and chief of staff, noted in the YouTube live stream that the number of arrests was significantly lower than during the nationwide protests in January after Navalny was arrested.

Hundreds were jailed after the January demonstrations and Navalny allies were slapped with criminal charges for allegedly violating coronavirus restrictions.

Navalny's aides and associates in different Russian regions, in the meantime, were targeted with detentions and raids both before and after Wednesday’s protests. Many were jailed, and one was reportedly brutally beaten by police who came to search his apartment.

Gallyamov said this indicated a change of tactics for the authorities, from sweeping crackdowns on all demonstrators to targeting suspected protest leaders.

Last week, Russian authorities took the pressure on Navalny's allies and supporters to a new level, with the Moscow prosecutor's office petitioning a court to label as his Foundation for Fighting Corruption and his network of regional offices as extremist groups. Human rights activists say such a move would paralyze their activities and expose their members and donors to prison sentences of up to 10 years.

Navalny began the hunger strike to protest prison authorities' refusal to let his doctors visit after he developed severe back pain and numbness in his legs. Officials insisted Navalny was getting all the medical help he needs. But Navalny’s doctors said last week that the politician could be near death, as his test results showed sharply elevated levels of potassium, which can bring on cardiac arrest, and heightened creatinine levels that indicated impaired kidneys.

Navalny was transferred Sunday from a penal colony east of Moscow to the hospital ward of another prison in Vladimir, a city 180 kilometres (110 miles) east of the capital.

On Thursday, Navalny’s personal physician Dr. Anastasia Vasilyeva released a letter she signed with four other doctors, urging him to end his hunger strike.

The letter revealed that Navalny was taken to a regular hospital Tuesday in Vladimir, where he underwent tests and was examined by specialists "in accordance" with requests from his doctors. It said they were given the results of those tests through Navalny's lawyers and family on Thursday.

Navalny's doctors said they would continue to insist on access to their patient â€” his chief demand in launching his hunger strike â€” but urged him "to immediately stop the hunger strike in order to save life and health," saying that they consider being examined by "civilian," non-prison doctors and undergoing "objective tests" enough to end the strike.

Volkov in a tweet Thursday said the pressure Navalny's supporters put on the authorities, first by calling a demonstration and then by making it happen, helped achieve this result.