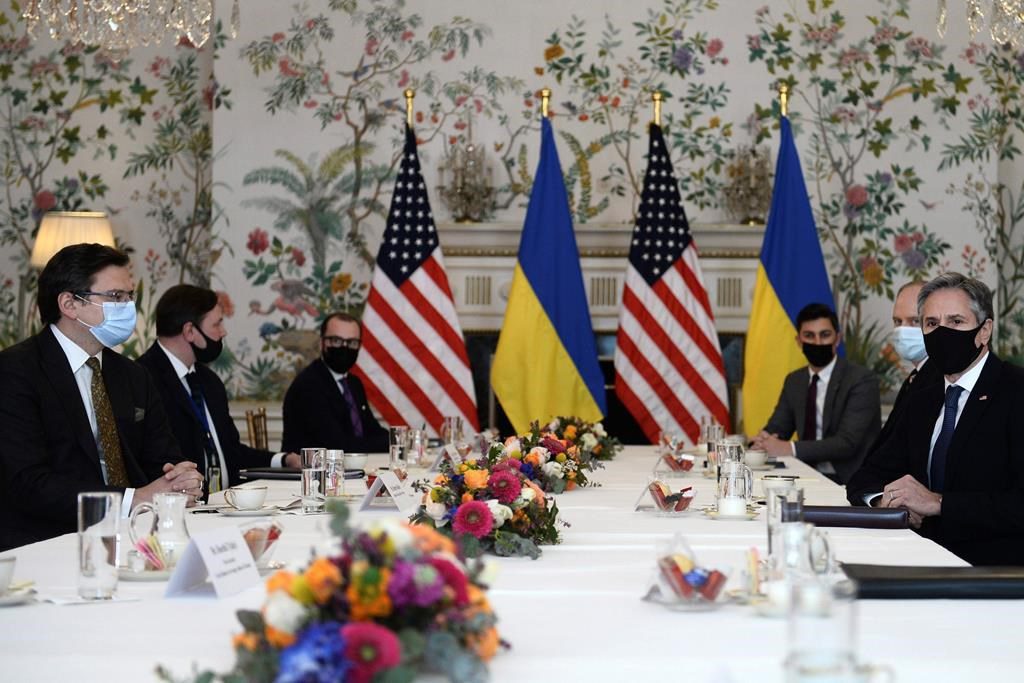 BRUSSELS â€” The United States and NATO on Tuesday expressed strong support for Ukraine and warned Russia against pressing ahead with a major troop buildup along the former Soviet republic's eastern border.

Blinken accused Russia of taking "very provocative" actions that have alarmed Ukraine and the West. Stoltenberg, meanwhile, called the Russian movements "unjustified, unexplained and deeply concerning." Ukrainian Foreign Minister Dmytro Kuleba said Kyiv welcomed the support and urged Western countries to make clear to Moscow that it would pay a price for its "aggression."

The comments came amid a surge of cease-fire violations in eastern Ukraine, where Russia-ba?ked separatists and Ukrainian forces have been locked in a conflict since Moscow's 2014 annexation of Ukraine's Crimean Peninsula. NATO is holding a special meeting Tuesday on Ukraine.

"The U.S. stands firmly behind the sovereignty and the territorial integrity of Ukraine," Blinken told Kuleba at the start of their meeting at the residence of the U.S. ambassador to Belgium, a post once held by Blinken’s uncle. “That's particularly important at a time when were seeing, unfortunately, Russia take very provocative actions when it comes to Ukraine."

Kuleba replied that Ukraine was grateful for the support of the U.S. and NATO, an alliance that Kyiv is looking to join over fierce Russian objections.

"In this struggle, the support of the United States is absolutely crucial and deeply appreciated," Kuleba said. He called Russia’s troop build-up "aggressive" and asked the U.S. and others to “make it very clear to Russia that the price of its aggression against Ukraine will be too heavy for it to bear."

Earlier, at news conference with Kuleba at NATO headquarters, Stoltenberg said the alliance was united in its "unwavering" support for Ukraine. "NATO stands with Ukraine," he said. "Russia must end this military buildup in and around Ukraine, stop its provocations and de-escalate immediately.”

"Russia has moved thousands of combat troops to Ukraine's borders, the largest massing of Russian troops since the illegal annexation of Crimea in 2014. Over the last days, several Ukrainian soldiers have been killed in eastern Ukraine," he said.

The Ukrainian foreign minister sounded defiant toward Moscow, and said Ukraine and its Western partners were better prepared than seven years ago.

"Should Moscow take any reckless move or start a new spiral of violence, it will be costly in all senses," Kuleba said.

A special NATO meeting Tuesday on Ukraine would make sure the alliance is not caught unaware, he said.

“By gathering today, we try to avoid the mistake that was made in 2014 when Russia was ready to act swiftly and pursue its military goals,” Kuleba said.

Ukraine has said Russia has accumulated 41,000 troops at its border with eastern Ukraine and 42,000 more in Crimea. The numbers are likely to grow as the troops keep arriving.

The Kremlin has maintained that Russia is free to deploy its troops wherever it wants on its territory and has repeatedly accused the Ukrainian military of "provocative actions" along the line of control and of planning to retake control of the rebel regions by force.

Kremlin officials charged that Kyiv's actions have threatened Russia's security, warning that Russia may intervene to protect Russian speakers in the east.

Stoltenberg insisted it was up to the alliance’s 30 members to decide who could join the group, "and no one else has any right to try to meddle or to interfere in that process. It's a sovereign right of every nation like Ukraine to apply for membership."

"This is an important principle, because Russia is now trying to reestablish some kind of sphere of influence where they try to decide what neighbours can do. And that is a world we are really trying to leave behind," the NATO chief said.