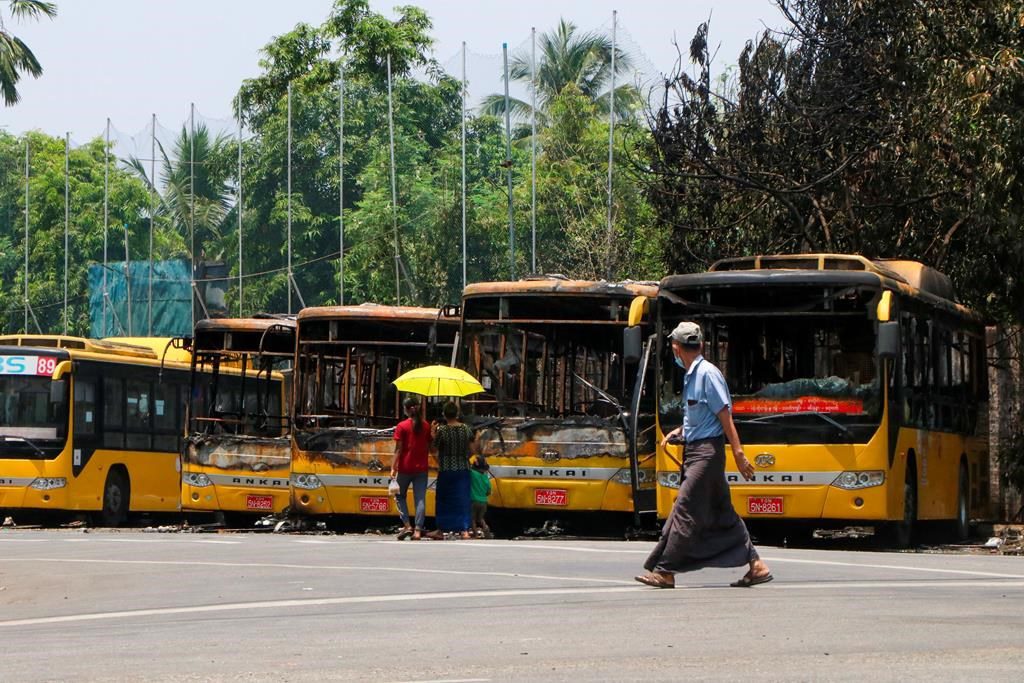 YANGON, Myanmar â€” Myanmar's ruling military squared off against its opponents in the courts, the streets and the countryside Monday, showing no sign of relenting in its crackdown against those opposed to February’s coup.

Aung San Suu Kyi, who led the elected government toppled in the military takeover, was accused of a fresh criminal charge when she appeared by video link before a judge in the capital Naypyitaw on Monday, according to her lawyers.

Suu Kyi was accused of breaching a law intended to control the spread of the coronavirus, the second such charge against her under the same law. She is already facing charges of illegally importing walkie-talkies, unlicensed use of them, inciting public unrest and breaking the official secrets act.

The junta also has accused Suu Kyi of corruption and presented on state television what it said was evidence that she took bribes.

Suu Kyi's supporters say the prosecutions are politically motivated tactics to try to legitimize the Feb. 1 coup and discredit her. The generals overthrew Suu Kyi's government less than three months after she won a landslide victory in a general election and any conviction could see her banned from a future election.

The coup put a halt to the progress Myanmar had made toward greater democratization after five decades of military rule. The takeover and the bloody crackdown on opposition that has followed has led to calls for an arms embargo on the country and other international sanctions that could pressure the military into a return to more democratic rule.

As of Sunday, 706 protesters and bystanders have been verified as killed in the post-coup crackdown, said the Assistance Association for Political Prisoners, which tracks casualties and arrests.

U.N. officials in Myanmar said they are “appalled by the violence since Friday in which some 93 protesters were reportedly killed, many of them in the city of Bago, U.N. spokesman Stephane Dujarric said, adding that the U.N. team "is particularly concerned over reports of the use of heavy artillery against protesters."

Despite the lethal threat protesters returned to the streets and rural by-ways of southern Myanmar on Monday, determined to keep public demonstrations going.

In Launglone Township near the city of Dawei, a large group mounted motorbikes and rode through the villages of Pandale and Nyin Maw, red banners snapping in the breeze as they sang and chanted slogans of resistance.

In Dawei itself, students, teachers and engineers carried their message of defiance through the city on foot.

Marches took place in other cities and towns as well, and a few carried on a trend of assigning a quirky theme to their protests.

Demonstrators in Mandalay, the country's second-biggest city, held a "Watermelon Strike," marching with big slices and making anti-coup displays featuring slogans painted on the melons or attached to them.

In Yangon, five public city buses caught fire before dawn, with no indications of who might have set them alight. Such mysterious attacks have mounted in recent weeks, with the junta blaming protesters and protesters blaming the junta.

More intense violence took place in the northern state of Kachin, where two Myanmar military fighter jets attacked a base belonging to the Kachin Independence Organization, which is the main political group representing the Kachin ethnic group in the area. The organization, which seeks autonomy for the Kachin, maintains its own military force, and said its base has also been under artillery attack, reported the Kachin News Group,

Their report also said Kachin forces on Monday staged a successful attack to drive away a Myanmar military force guarding a bridge on a major road.

The Kachin are one of more than a dozen ethnic minority groups who have been seeking autonomy for decades. Another, the Karen in eastern Myanmar, have also been facing attacks from the army since the coup, including air strikes.

The Free Burma Rangers, which offers humanitarian medical assistance to ethnic minority villagers in Myanmar's border regions, says more than 20,000 villagers have been displaced by the government's offensive, which was continuing Monday with the use of artillery.

The Kachin and the Karen have declared their solidarity with the protests against the coup and vowed to protects demonstrations in the territory they control.

According to the head of her legal team, Khin Maung Zaw, the three defendants appeared in good health, but the lawyer who was in court was not allowed to speak to them about any matters other than the immediate cases against them.

On the diplomatic front, U.N. Secretary-General Antonio Guterres called the latest reports of violence and killings by security forces "appalling" and encouraged the 192 other U.N. member nations "to use their influence to impress on the parties the need to stop this escalation and to take steps that will facilitate the return to civilian rule," U.N. spokesman Dujarric said.

"He emphasizes the key role that the region can and must play in advising the national actors to take steps towards the return of peace and stability in Myanmar," Dujarric said.

U.N. Special Envoy for Myanmar Christine Schraner Burgener is in the region meeting key players "in order to promote an effective international response based on a unified regional effort," Dujarric said, adding that despite the military turning down her request to visit she remains ready to go "at the earliest opportunity."