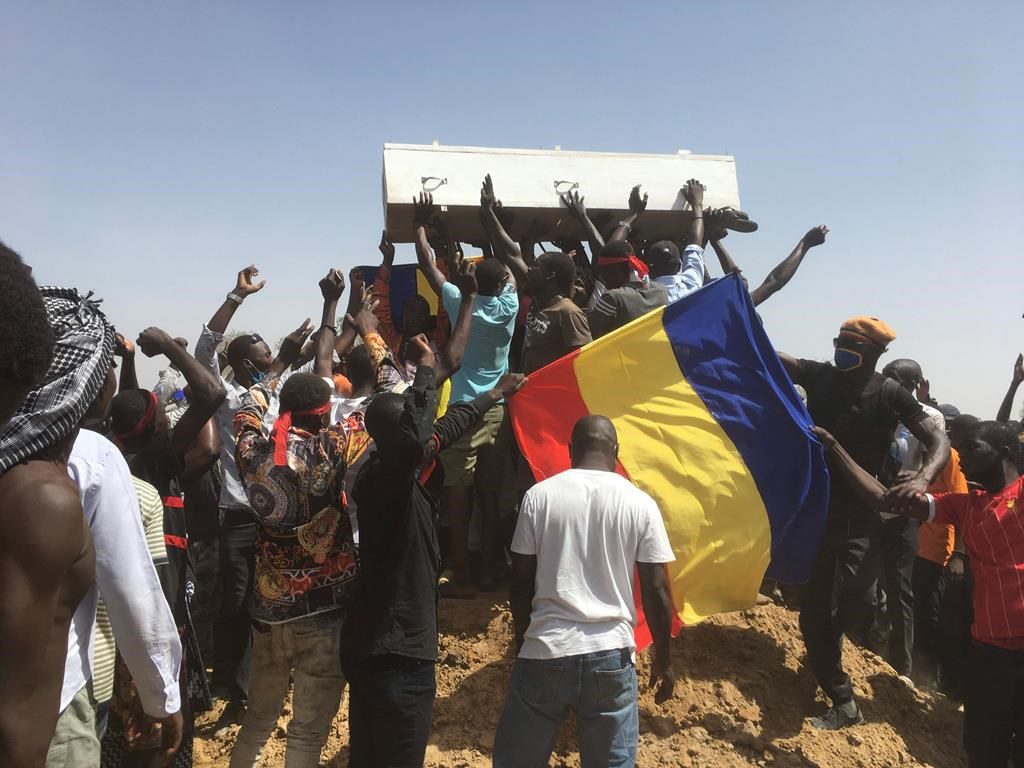 N’DJAMENA, Chad â€” Hundreds of chanting mourners carrying Chadian flags gathered Saturday to bury some victims who shot dead this week during demonstrations against the country’s new military government, the first change in leadership in this central African nation in more than three decades.

The outpouring of grief in the capital of N’Djamena came as authorities put down another anti-government demonstration in southern Chad and as the country’s new prime minister urged calm amid calls for more protests.

The crowds of mourners arrived by minibus and motorcycle taxis under a scorching sun at midday, as military and police vehicles lined the road to the cemetery’s entrance. Family members wailed as Yannick Djikoloum’s flag-draped casket was lowered into the ground.

"The history of great men is written in blood. The victory of the Chadian people is in hand," read a sign held by one mourner.

The 20-year-old was one of at least six people who died Tuesday when demonstrations began before dawn in the largest unrest to hit N’Djamena since the military announced a week earlier that rebels had killed President Idriss Deby Itno on a distant battlefield.

The fear of further crackdowns kept demonstrators home in N’Djamena on Saturday, though a protest was swiftly put down in the southern town of Sarh.

On Tuesday, security forces were accused of shooting at the crowds who took to the streets to protest that the military put Deby’s 37-year-old son, Mahamat, in charge after his death. Under Chad’s constitution, power should have been handed over to the president of National Assembly.

The U.N. human rights office expressed alarm at Tuesday’s violence, saying it was "deeply disturbed by the apparently disproportionate use of force â€” including the use of live ammunition â€” by defence and security forces."

The spectre of more anti-government protests is just one of the threats now facing the transitional military council in power. The rebels blamed for killing Deby also have continued to battle the Chadian military 300 kilometres (186 miles) north of the capital.

The armed group known as the Front for Change and Concord in Chad has threatened to attack the capital and depose Deby’s son. A march on N’Djamena, though, became less likely after former colonizer France lent its support publicly to the new administration.

The French have a large military base in Chad, and the rebels already have accused France of providing intelligence on rebel positions to the Chadian army.

France’s acceptance of Mahamat Idriss Deby comes after Chad became a vital partner in the fight against Islamic extremism during his father’s tenure. Chadian forces have played a critical role in the fight against Islamic extremism, particularly in northern Mali, and the French government described Deby as a "courageous friend" following his death.