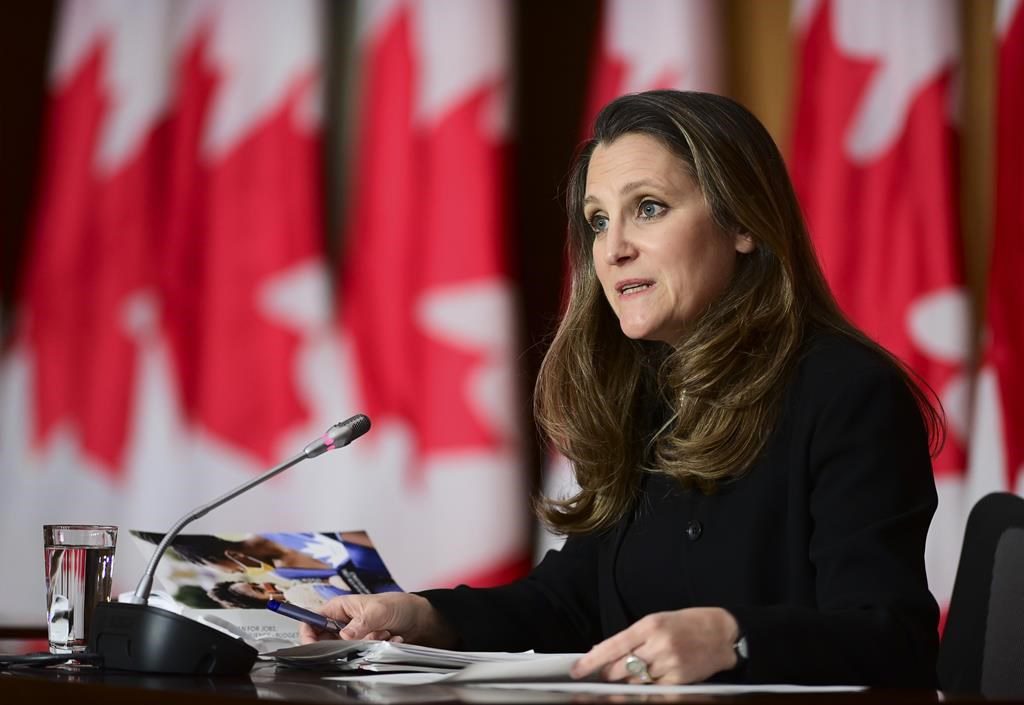 OTTAWA â€” Finance Minister Chrystia Freeland says the country needs a boost in the supply of housing to help make prices more affordable, but suggests there may be other steps governments can take.

Speaking at a virtual event on Thursday, Freeland said the federal government wants to work with lower levels of government on the issue, saying there is more that cities, provinces and Ottawa can do together.

Freeland didn’t detail what other options could be out there during her hour-long talk with the Greater Vancouver Board of Trade.

Monday’s federal budget promised $2.4 billion over five years, beginning with nearly $1.8 billion this fiscal year, for affordable housing and pledged to tax foreigners who own vacant homes in Canada.

Freeland said the government would take into account concerns from places like Whistler, B.C., where a vacancy tax may be problematic for Americans who own vacation properties in the area.

While housing shouldn’t be used by foreign buyers to store wealth offshore, Freeland said that affordability concerns are first and foremost an issue of supply.

“Something that we want to work with provinces, municipalities on is really finding more and more creative ways to increase housing supply in Canada,” Freeland said during the event, one of several designed to promote budget measures.

The federal government has faced increasing pressure to intervene in Canada’s hot housing market where the average sale price in March reached a record $717,000, a year-over-year increase of 32 per cent, according to the Canadian Real Estate Association.

High household debt was a key economic concern prior to the pandemic, and a research note this month from staff at the Bank of Canada pointed out that although mortgage rates are at all-time lows, highly indebted households remain financially vulnerable.

The research note, which the bank publishes but is not official policy, said the share of newly issued mortgages with loan-to-income ratios above 450 per cent has risen substantially since the start of the pandemic, hitting highs not seen since just before a stress test kicked in for uninsured mortgages.

Earlier this month, the federal banking regulator proposed tightening the stress test and setting the qualifying rate for uninsured mortgages at the contracted rate plus two percentage points or 5.25 per cent, whichever is higher.

The Office of the Superintendent of Financial Institutions expressed concerns that current market conditions could put lenders at increased risk should economic conditions deteriorate. It was also concerned borrowers may have repayment problems if and when interest rates rise from their current rock-bottom levels.

Borrowers affected by the proposed floor could find themselves having to save more for a larger down payment, which OSFI noted would lower their mortgage amount, or opt for a cheaper house.

A spokesman for the regulator said its analysis of approved borrowers over the second half of 2020 suggested the change in qualifying rate would reduce mortgage loan amounts between two and four per cent, holding the amortization steady.

Freeland would have to decide on any changes to the stress test for insured mortgages. On Monday, Freeland would only say the government will closely follow OSFI’s consultations.

On Wednesday, Bank of Canada governor Tiff Macklem welcomed the move by OSFI to tighten its stress test. He also said that the federal budget’s vacancy tax would also be helpful in tamping down speculation and encourage owners to rent out those homes to add supply to the market.

“The problem with that is that you purchase a home and you leave it vacant, you’re taking housing stock effectively out of the market. Nobody can live in it,” Macklem said.

“What we’re seeing in the market is that demand is running ahead of supply. A big part of the solution is to get supply to catch up with demand.”

Macklem said the central bank is keeping a close eye on developments in the housing market, and will have more to say next month.