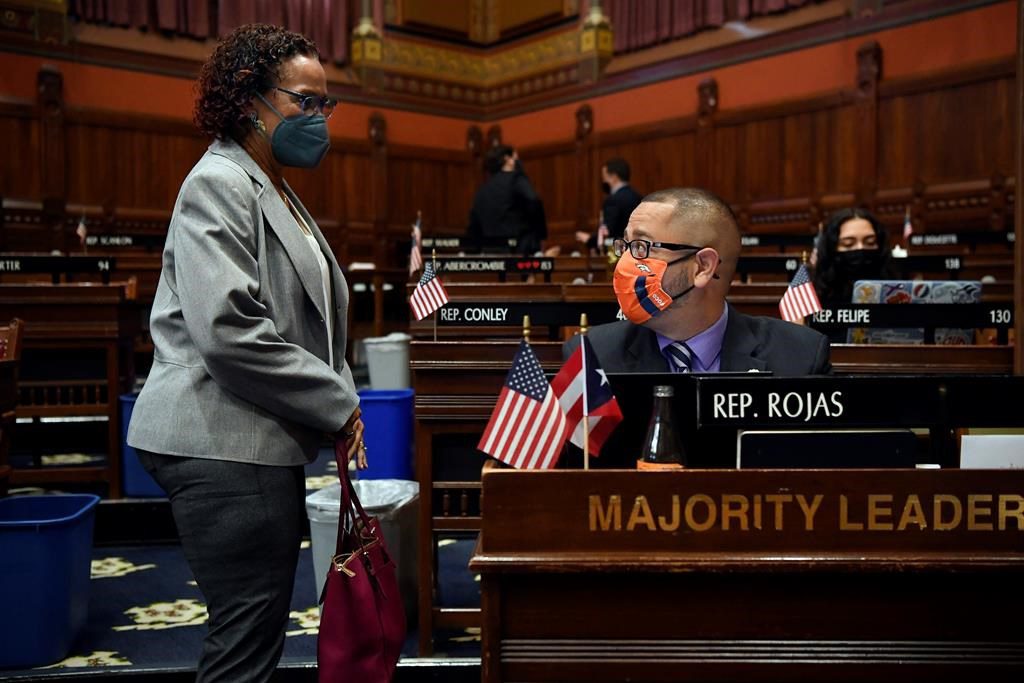 In July after George Floyd was killed in Minneapolis, Black and Latino members of the Connecticut General Assembly worked to enact sweeping changes to policing in the state, and since, have continue to flex their collective muscles.

Vowing that was "just the beginning," the lawmakers have turned to other long-standing issues affecting communities of colour, from insisting any new recreational marijuana program will benefit those most harmed by the war on drugs, to addressing the impact of racism on public health disparities that were underscored by the COVID-19 pandemic.

"We pretty much said that no bill will pass if it's not equitable to the communities of colour. We pretty much said, 'That's our mantra,'" said Rep. Geraldo Reyes, a Democrat and chairman of the influential Black and Puerto Rican Caucus, which has a record high 32 members this year in the 151-member Connecticut General Assembly.

They led passage of a bill in March making it illegal to discriminate against someone because of their hairstyle, with lawmakers recalling during emotional floor debates the indignity they and their relatives have experienced for wearing their natural hair in work places or at schools. Democratic Gov. Ned Lamont signed it into law.

In state legislatures across the country, minority legislators and their allies are seizing on the nation's reckoning with racial injustice to insist equity be considered in a range of legislation. And many are urging their colleagues to be bold.

"If we don't do it now, we will never get it done," said Connecticut state Sen. Doug McCrory of Hartford, a Black legislator who called for an end to "Novocain" legislation: numbing, incremental bills that don’t make major improvements for people of colour regarding housing, economic opportunity, education and more.

A similar sentiment was echoed in California, where the first Black lawmakers to lead that Legislature's two public safety committees promised to bring "radical change" to improve the treatment of Black and Latino people by law enforcement.

"We can now focus like a laser to make sure that our communities are not continuing to be oppressed," said Assemblyman Reggie Jones-Sawyer, a Democrat from Los Angeles.

The push comes as legislators of colour are growing in numbers and political clout in some states, giving them a greater ability to advance such ambitious legislation that's being urged by their constituents.

"As a Black woman, I personally experience the effect of systemic racism, daily, but for the low-income public housing community, it is greater because there are multiple systems that weigh-in on their lives," she said.

Liles is part of a grassroots group of public housing residents residents who she said lives in "environmentally damaged" areas with poor clinics and schools "because of this cyclical oppression resulting from racism."

In Connecticut, there are more racial minorities in legislative leadership positions than anytime in recent memory, including House Majority Leader Jason Rojas, the first Hispanic person to hold one of the top jobs.

According to the National Association of Latino Elected and Appointed Officials or NALEO, the number of Latino state legislators has grown nationally from 197 members in 2001 to 332 in 2021. NALEO also identified Latino lawmakers holding top legislative leadership positions in nine states. Meanwhile, there are currently 752 Black lawmakers in state and U.S. territory legislatures, according to the National Black Caucus of State Legislators.

Legislators in other states including Minnesota, Ohio and Pennsylvania say they too are sensing an opportunity to advance equity-related proposals that have stalled in the past.

Minnesota State Rep. Fue Lee, a Hmong-American Democrat who represents part of Minneapolis, the city where Floyd was killed, said his legislature would not have been able to pass wide-ranging police reforms last year, including a ban on chokeholds in all but extreme circumstances, without the efforts of the People of Color and Indigenous (POCI) Caucus.

"We are looking at the public investment that we're making and some of the policies through a racial equity lens to ensure that whatever money or whatever legislative policy that's coming through the legislature, it needs to consider the racial equity impact that it's going to have on the rest of Minnesotans," said Lee, who chairs the State Capital Investment Committee that oversees a budget of about $1 billion.

Even as Black, Latino and Asian lawmakers move into leadership positions in Democratic leaning states, some politically red states are considering bills that may limit voting participation.

In Georgia, where Republicans control the legislature, Democratic lawmakers of colour failed to stop the passage of a contentious election law that adds a photo ID requirement for voting absentee by mail and cuts the amount of time people have to request an absentee ballot, among other provisions. It’s part of a tide of GOP-sponsored election bills introduced in legislatures across the country after Republican former President Donald Trump falsely claimed there was widespread election fraud.

While Republicans in Georgia have argued the law is needed to restore voters' confidence, critics have said it will make it harder for people to vote, particularly Black and other minority voters.

Democratic state Senate Minority Leader Gloria Butler said the new law overshadowed legislative accomplishments made in 2021, such as the repeal of the Georgia's citizen's arrest law. The bill passed a little more than a year after the fatal shooting of a Black man, Ahmaud Arbery, who was pursued and killed by white men who said they suspected him of a crime.

"It's hard not to feel that with this excellent progress, that we are not taking one step forward and two steps back," Butler said on the closing day of the legislative session last month.

Arturo Vargas, CEO of the NALEO Education Fund, said he believes the voting legislation that passed in Georgia and similar proposals considered in other Republican-leaning states reflect an attempt to curb the growing influence of minority state lawmakers.

"At some point, there will be more Latinos and Latinas and African Americans in leadership roles, and I think what the status quo wants to do is to delay it as much as possible,” he said. “And that is exactly, in my view, the point of some of these changes in voting practices that legislatures are doing around the country."

Not all state lawmakers of colour support these efforts to promote racial equity through state laws. In Connecticut, Republican Rep. Kimberly Fiorello, who is of Asian descent, recently questioned language that referred to addressing racial and gender disparities in a bill legalizing the adult use of cannabis.

"I understand the desire to legalize marijuana. But this kind of language, I don’t know that this is the proper role of government. I don’t know how. We will always have disparities in the world,” she said during a virtual committee meeting.

But the renewed scrutiny of fatal police shootings, coupled with mass protests, have pushed more legislators to take on equity issues, former state senator in Nebraska and policy lead at the National Black Caucus of State Legislators, Tanya Cook said.

"They can say there’s no such thing as systemic racism, but they sound like an idiot," Cook said. "I think people seeing George Floyd get killed and Breonna Taylor and all of the uprising that we saw over the last year, with people of all ages and colours participating, heightened the awareness that, 'Hey, I maybe thought things had changed with Barack Obama, but clearly they haven't.'"

Associated Press Writers Don Thompson in Sacramento and Jeff Amy in Atlanta contributed to this report.