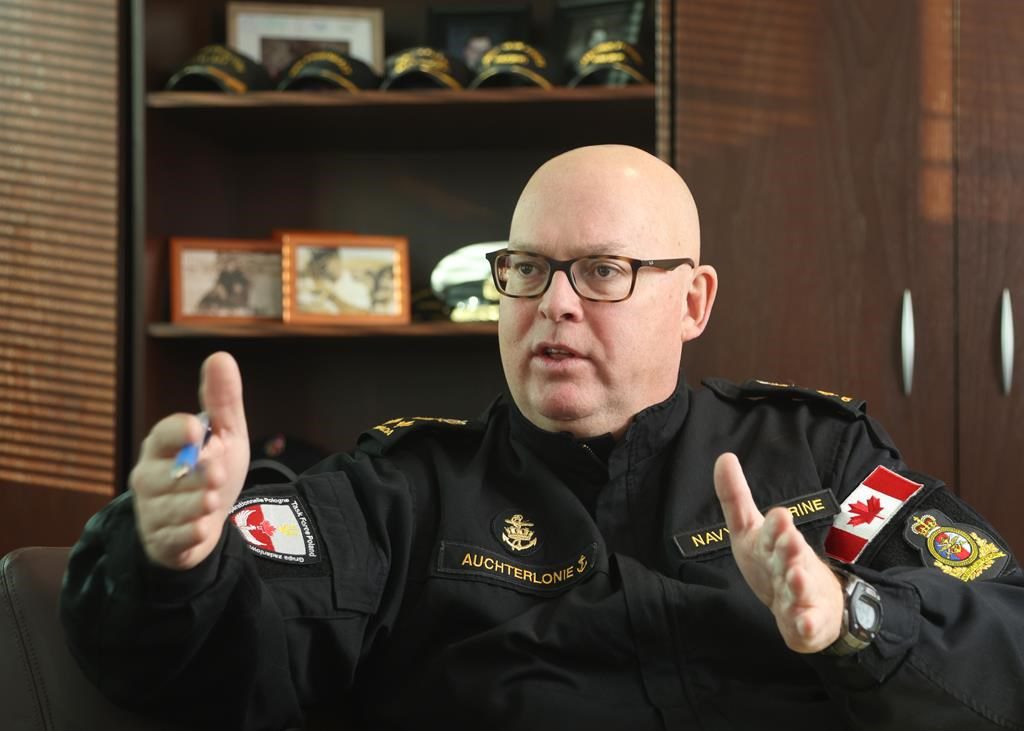 OTTAWA — There are concerns at the highest levels of the Canadian Armed Forces that this country won’t have access to the same cutting-edge military technology as its closest allies because it is not part of a security pact between Australia, Britain and the United States.

The trilateral treaty, nicknamed “AUKUS” after the three countries involved, was announced in September 2021 in what many have seen as a bid to counter China’s growing military presence in the Indo-Pacific region, where Canada has growing economic and security interests.

While much of the attention around the pact has centred on American and British plans to provide nuclear submarine technology to Australia, Vice-Admiral Bob Auchterlonie told The Canadian Press in a recent interview that isn’t the whole story.

Auchterlonie is the commander of the Canadian Joint Operations Command. In that role, he is responsible for managing dozens of military operations at home and abroad while closely monitoring the threats and challenges facing Canada and the Armed Forces.

“The fact is that (nuclear submarine) technology has existed for a while, so the sharing of that is not a big deal,” he said.

“The issue is when you start talking about advanced technology in terms of the artificial-intelligence domain, machine learning, quantum, all of these things that really matter moving forward. Those are conversations we need to be in on. And the issue is: Why are we not included in this? Is it resistance to get involved? Is it policy restrictions that we have? Or are we just not going to invest? That’s the question. So it is a significant concern.”

The federal Liberal government has not said why Canada is not part of AUKUS, or even whether it was invited, with Defence Minister Anita Anand’s office again sidestepping the question last week.

Anand’s spokesman Daniel Minden instead referred to Canada’s participation in the Five Eyes intelligence-sharing alliance, which includes Australia, Britain, the U.S. and New Zealand, as well as the North American Aerospace Defence Command and the NATO military alliance.

“Through the Five Eyes and our bilateral partnerships, we will continue to work with our closest allies to keep Canadians safe,” Minden said in an email.

The Australian High Commission and U.S. Embassy in Ottawa referred questions to their respective capitals. The British High Commission did not respond to a request for comment.

Some analysts have previously questioned whether Canada’s absence is an indication of impatience over Ottawa’s perceived failure to get tough with China.

The government has in recent months hardened its position on China in a variety of ways, including through a ban on Huawei technology in Canada’s 5G network, new restrictions on foreign ownership in critical minerals and the unveiling of an Indo-Pacific strategy.

That strategy is intended to signal a marked shift in federal policy and priorities toward the region given its growing importance to Canada’s economy and security. It specifically identified China as “an increasingly disruptive global power.”

Many of those actions, such as the Huawei ban, came only after frustration from allies over long delays. Some critics have said the government still isn’t taking a hard enough line with Beijing.

Auchterlonie praised the Indo-Pacific strategy, which includes promises to deploy more naval warships and other military assets to the region while building closer defence relationships with a number of different countries.

“The strategy we have just come up with, and the fact that we have now blocked (Chinese) companies from investing in the North, has been a positive step for Canada, a real positive step,” he added. “I think we recognize the challenge we’re facing.”

He also reported no noticeable change when it comes to Canada’s participation in the Five Eyes alliance.

American officials warned for years that they may withhold sensitive intelligence if Canada did not take a stronger position on China, particularly during the Trump administration and as the Liberal government repeatedly put off a decision on Huawei and 5G.

“I work with my Five Eyes partners throughout the globe, and I haven’t seen a change in terms of the information-sharing piece,” Auchterlonie said. “So that is good.”

He nonetheless expressed concern about Canada’s lack of involvement in AUKUS, even as he acknowledged the issue has political dimensions and it may not be his place as a military officer to express such a sentiment.

“This is probably not my lane, but the fact is: What do I do for a living?” he said.

“I am the operational side of the Armed Forces. Therefore, am I concerned? Do I want to be involved with our closest allies in things? Yes, I do. Absolutely. And I think it’s critical given where you see technology moving. Canada needs to be part of that.”

This report by The Canadian Press was first published Jan. 15, 2023.