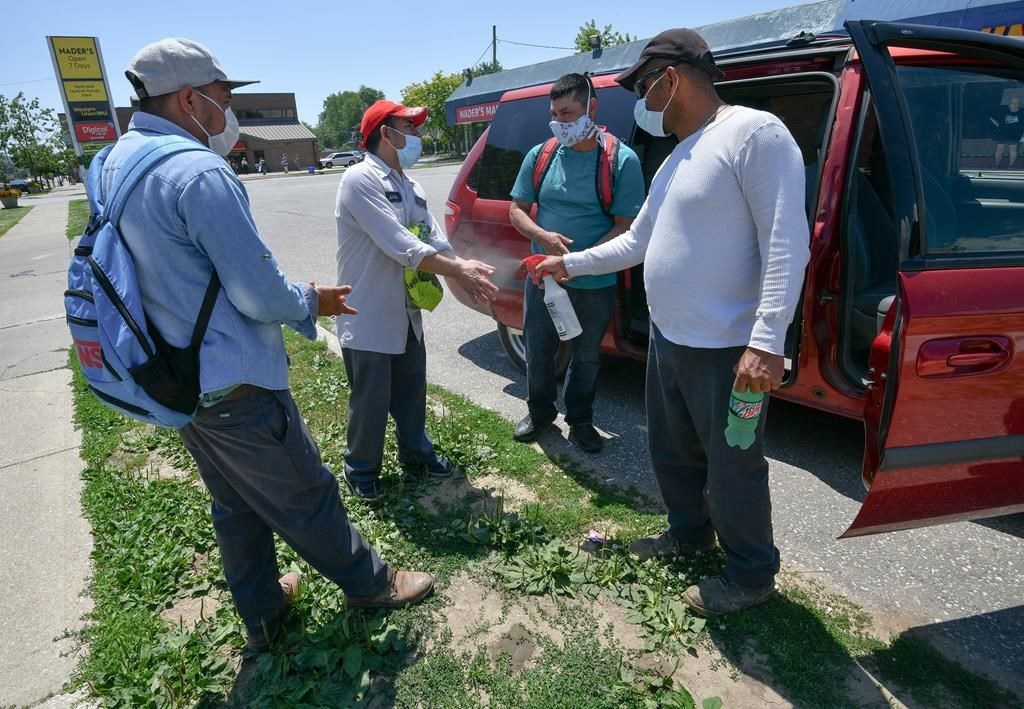 TORONTO â€” Migrant farm workers who come to Ontario from other countries are at higher risk of contracting COVID-19 and other infectious diseases due to their communal living and working conditions, according to a coroner’s report released on Tuesday.

To protect their health, the report recommends putting isolation centres in place, setting up an anonymous phone line for reporting concerns, and conducting random tests for COVID-19.

Foreigners without permanent status in Canada are allowed to do temporary agricultural work in this country under a federal program. Others find their way onto Ontario farms illegally.

The report by Reuven Jhirad, the province’s deputy chief coroner, was based on an investigation into the COVID-19 deaths in southwestern Ontario of three Mexican farm workers. Bonifacio Romero, Rogelio Santos and Juan Chaparro died in May and June last year.

Where exactly they contracted the infection well after arrival in Canada â€” in the community or at their residences or workplaces â€” is unknown.

“We should not forget that this review and its recommendations arise out of the unfortunate and untimely deaths of three men who left their home country to work in ours,” Jhirad says.

In all, his report makes 35 recommendations. Several are directed at enhanced information sharing between the various levels of government, employers, public health authorities, the workers and their advocates.

“This report does not represent full consensus between all of the participants,” he says. “This is too complex an issue with a variety of opinions to achieve that.”

The report stresses ensuring workers have access to medical care that isn’t necessarily dependent on their employers.

One recommendation calls on the federal government to consider an amnesty for an employer who seeks care for an undocumented worker. Ottawa, however, says doing so could shield scofflaw employers from legal consequences and the same applies to the workers.

“An amnesty triggered by a non-status worker seeking medical attention would effectively prohibit the government of Canada from ever seeking the removal of that particular worker,” the federal government says.

Another recommendation calls on Ottawa to make it clear employers should pay workers forced into quarantine or isolation, and can’t make them work during that time.

The report also suggests mandatory reporting under the Coroners Act for all migrant farm worker deaths.

It notes a coroner initially decided against investigating one of the three deaths on the basis that COVID-19 was a natural disease. The decision was later reversed in light of the “importance of understanding the risks” to the workers from a public health and societal point of view.

In response to the report, Ontario’s agriculture minister, Ernie Hardeman, said he was reviewing the recommendations.

Hardeman said the province had already taken steps to protect migrant agri-food workers such as by making COVID-19 vaccines available to them on arrival in Canada and offering immediate health-care insurance.

Other measures, he said, include inspections of farms, greenhouses and other agricultural operations to ensure health and safety measures are followed, and working with Ottawa to help ensure employers have quarantine and isolation plans in place.

“Workers who come to Ontario under the federal government's (temporary farm worker) program are valued members of Ontario’s agri-food sector,” Hardeman said. “Their health, safety and well-being are very important to us.”

Since 2001, Ontario’s coroner has investigated 41 deaths of foreign farm workers, seven of which occurred last year. Four of the latest deaths are still under review.