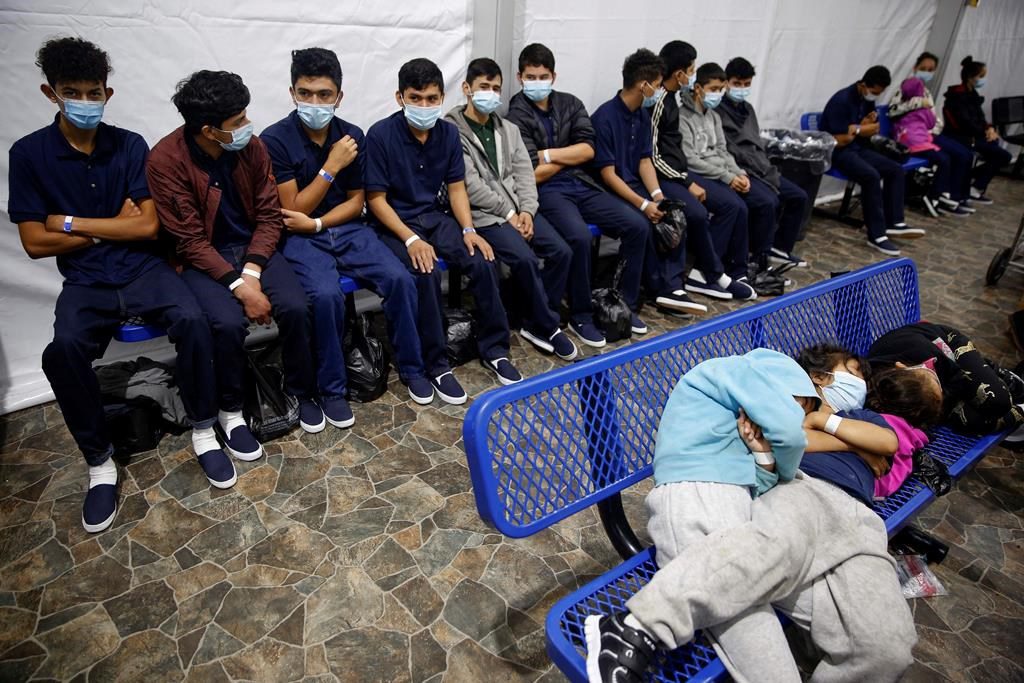 WASHINGTON â€” The Biden administration has struck an agreement with Mexico, Honduras and Guatemala to temporarily surge security forces to their borders in an effort to reduce the tide of migration to the U.S. border.

The agreement comes as the U.S. saw a record number of unaccompanied children attempting to cross the border in March, and the largest number of Border Patrol encounters overall with migrants on the southern border â€” just under 170,000 â€” since March 2001.

According to White House press secretary Jen Psaki, Mexico will maintain a deployment of about 10,000 troops, while Guatemala has surged 1,500 police and military personnel to its southern border and Honduras deployed 7,000 police and military to its border "to disperse a large contingent of migrants" there. Guatemala will also set up 12 checkpoints along the migratory route through the country.

A White House official said Guatemala and Honduras were deploying troops temporarily in response to a large caravan of migrants that was being organized at the end of March.

She added that the agreement was the product of "a series of bilateral discussions" between U.S. officials and the governments of the Central American nations. While Vice-President Kamala Harris has been tasked with leading diplomatic efforts to tamp down on the increase in migration at the U.S. border, Psaki declined to share details on her involvement with the discussions and said only that the discussions happened at "several levels.”

She noted that Roberta Jacobson, who will depart her role as the administration’s southwest border co-ordinator at the end of the month, was involved in talks.

Mexico announced in March that it was deploying National Guard members and immigration agents to its southern border, and it has maintained more personnel at its southern border since Trump threatened tariffs on Mexican imports in 2019.

On Monday, Mexico's Foreign Affairs ministry said, "Mexico will maintain the existing deployment of federal forces in the its border area, with the objective of enforcing its own immigration legislation, to attend to migrants, mainly unaccompanied minors, and to combat the trafficking of people."

Honduras Foreign Affairs Minister Lisandro Rosales said Monday that Honduras maintains a multinational force at its border with Guatemala that works closely with that government on not only immigration, but also organized crime and other illegal activity. But "there was no commitment on the part of the Honduran delegation to put soldiers on the border, even though there is a clear commitment by the Honduran government to avoid this kind of migration that generates death and mourning for Honduran families," Rosales said.

But Honduras Defence Secretary Fredy Santiago DÃ­az Zelaya, who was part of a Honduran delegation that met with U.S. officials in Washington last week, said later that the military was studying the possibility of sending more troops to the border to assist in migration control. He said the military always works under a plan and that planning would determine how many troops would assist national police and immigration authorities at the border.

"We need to do a correct analysis of the situation, increase troops if it's necessary," DÃ­az Zelaya told local press. He said Honduras would do so "in response to this request that comes from the great nation to the north (the United States) to be able to help on the issue of immigration."

The Guatemalan government denied there was any signed agreement with the United States to place troops at the border to stop migrants. "The Guatemalan government has undertaken protection and security actions at the border since last year, on its own initiative, it is a constitutional mandate," said presidential spokeswoman Patricia Letona. "In the context of the pandemic, the protection of the borders has become a fundamental aim for the containment of the virus."

Guatemalan troops have been responsible for breaking up the last several attempted migrant caravans.

The increase in migrants at the border is becoming one of the major challenges confronting Biden in the early months of his first term.

Numbers grew sharply during Trump's final year in office but further accelerated under Biden, who quickly ended many of his predecessor's policies, including one that made asylum-seekers wait in Mexico for court hearings in the U.S.

Mexicans represented the largest proportion of people encountered by the U.S. Border Patrol, and nearly all were single adults. Arrivals of people from Honduras and Guatemala were second and third, respectively, and more than half of the people from those countries were families or children travelling alone.